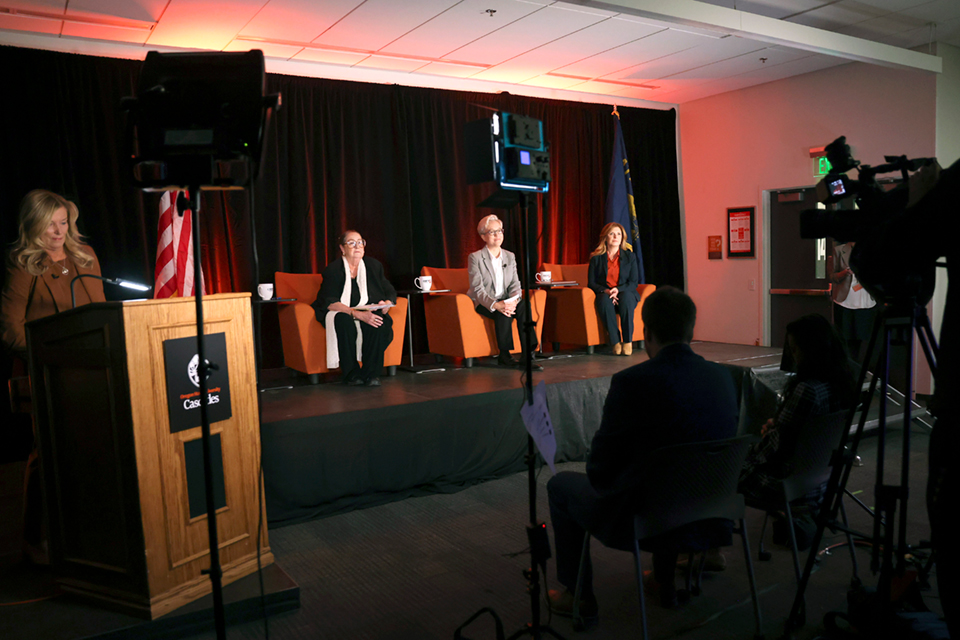 SALEM, Ore. (AP) — The three women who want to be Oregon's next governor clashed Tuesday over gun control, abortions and other hot-button issues at an in-person debate, just six weeks before election day.

Democratic nominee and former Oregon House Speaker Tina Kotek set the tone earlier Tuesday by tweeting a video saying that an election victory by either Republican candidate Christine Drazan or unaffiliated candidate Betsy Johnson would usher in “a right-wing Oregon.”

At the debate in Bend, Oregon, Kotek was alone in saying she would support a gun-control measure that has received enough voter signatures to get on the November ballot. Johnson and Drazan said they oppose it. The measure would require people wanting to purchase a gun to first qualify for a permit and is one of the strictest gun-control measures in the nation.

The epidemic of mass shootings in the nation recently hit Bend, a town near the Cascade Range which was the scene of a shooting at a supermarket on Aug. 28 in which the gunmen fired more than 100 rounds, killing two people before fatally shooting himself.

“What happened in Bend was an absolute tragedy. Someone facing extreme mental health challenges was intent on hurting others and was effectively able to do so ... but more gun laws will not prevent every single tragedy from happening,” Drazan said.

Johnson said the measure would unduly burden rural police departments. Applicants would apply for the permit from the local police chief, county sheriff or their designees. But Johnson said she would support raising the minimum purchasing age for certain weapons from 18 to 21.

Kotek and Johnson both said they supported abortion rights, drawing a bright line between themselves and Drazan, a former Oregon House Republican leader.

The abortion issue has become a potential liability for GOP candidates, including Drazan, following the Supreme Court’s decision to remove constitutional abortion protections.

Drazan complained that she was being attacked over her abortion stance, with Kotek and Johnson trying to “distract and divide.” Abortion is legal in Oregon, and Drazan insisted that she would follow the law if elected.

But Kotek countered that Drazan could harm abortion rights as governor.

“When she says, ‘I’ll just follow the law,’ a governor can do a lot of damage even if there’s a law on the books: stopping agencies, not being a champion, not moving resources to help Oregonians," Kotek said. "So you cannot trust that statement.”

The high number of people in Oregon who are houseless and the high cost of housing was also a point of contention among the candidates at the debate venue, Oregon State University-Cascades.

Drazan blames Kotek and Johnson, a former veteran lawmaker, for a homeless crisis.

In a Fox News interview earlier this week, Johnson disparaged Kotek as “tent city Tina” due to widespread homelessness that has blighted parts of Portland.

Drazan complained about taxes that have been imposed in recent years in Oregon and said “we’ve got to be serious about holding the line on new taxes.”

It was the second televised debate for the three candidates, with Democrats lacking a lock on this race. Johnson, who used to belong to the Republican party and then was a Democrat, is seen as a potential spoiler. Two national election-watching groups rated the race as a toss-up.