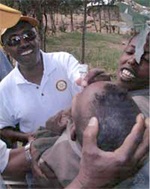 On July 4th, over 500 people from more than 75 countries will be sworn in as new citizens of the United States of America. They will be sworn in by U.S. District Court Judge Robert R. Beezer at the Safeco Insurance Fest"l: Naturalization Ceremony, July 4, at Seattle Center.
This 24th Annual Naturalization Ceremony, presented by the Ethnic Heritage Council, Seattle Center and the United States Citizenship and Immigration Services, is the largest daytime Independence Day observance in the Northwest.
It's where friends and family of the new citizens join the greater community in celebration and reaffirmation of what it means to be a citizen of the United States.
Each year, a naturalized U.S. citizen is honored for outstanding contributions to their adopted country. The award recognizes the value of immigrants to our community and nation.
Congressman Jim McDermott will present the 2008 Spirit of Liberty Award to Ezra Teshome.
In 2005, Ezra Teshome was named a global health hero by Time magazine, along with rock star Bono and Microsoft's Bill Gates, for his dedication to eradicating polio in sub-Saharan Africa.
After becoming a U.S. citizen, Teshome returned to his native Ethiopia in 1996 and saw many child victims of polio—a disease that could be avoided by just two drops of vaccine.
Through his Seattle association with the Rotary Club, Teshome joined with a team of Rotarians in an immunization drive that reached 16 million children in Africa.  Today, through these efforts, polio is just about wiped out in the world.
To many in Seattle, Ezra Teshome is an insurance broker, but to the rest of the world, he is a global health hero.
"It's really not about me," Teshome says. "We must share the blessings of this country.  It doesn't require a lot of money, but we must make a collective effort."
"I do this because it must be done," he says
Now Teshome is working with two Seattle Rotarians—David Spicer and David Weaver—to bring clean water to dozens of East African villages. About 250,000 children in Ethiopia alone die each year from waterborne diseases. His other humanitarian projects in Africa include providing ambulances, low-cost housing for the poor, and micro-credit programs to help families become self-sufficient.
Born in Addis Ababa, Ezra immigrated to the United States in 1971 with dreams of becoming an international lawyer and returning to help develop his native country.  However, political events in Ethiopia made it impossible for him to work there without compromise, so after graduating from Seattle University, he joined State Farm Insurance.  His lawyerly dreams were not totally unfulfilled, however; one of his daughters just graduated from Stanford Law School.
Teshome has also helped to build an Ethiopian church in the Seattle area and assists immigrant kids with adjustment to American life.
Because of his remarkable achievements, in 2004 Ezra was recognized as Rotarian of the Year by Rotary District of Puget Sound.  At 54 years old, he has lived most of his life in Washington and all four of his children are American citizens.  He also makes time for playing soccer, basketball and running.
The Naturalization Ceremony, produced each year by The Ethnic Heritage Council in efforts to promote inter-ethnic communication and cultural preservation in the Northwest, is part of the Safeco Insurance Fest"l series of year-round cultural events hosted by Seattle Center.
For more information on the ceremony, click on http://[email protected] or visit the Safeco Insurance Fest"l website at: http://www.seattlecenter.com /festal.
Navy Band Northwest entertains arriving guests beginning at 11 a.m. outside of Fisher Pavilion. The formal one-hour program begins at noon with speeches by Washington state Gov. Christine Gregoire, Washington Secretary of State Sam Reed, and U.S. Representatives Jim McDermott and Dave Reichert.
Seattle Mayor Gregory J. Nickels serves as master of ceremonies.
Native American performer and storyteller Gene Tagaban will present a sacred song and story, and the Total Experience Gospel Choir, under the director of Pat Wright, will perform.