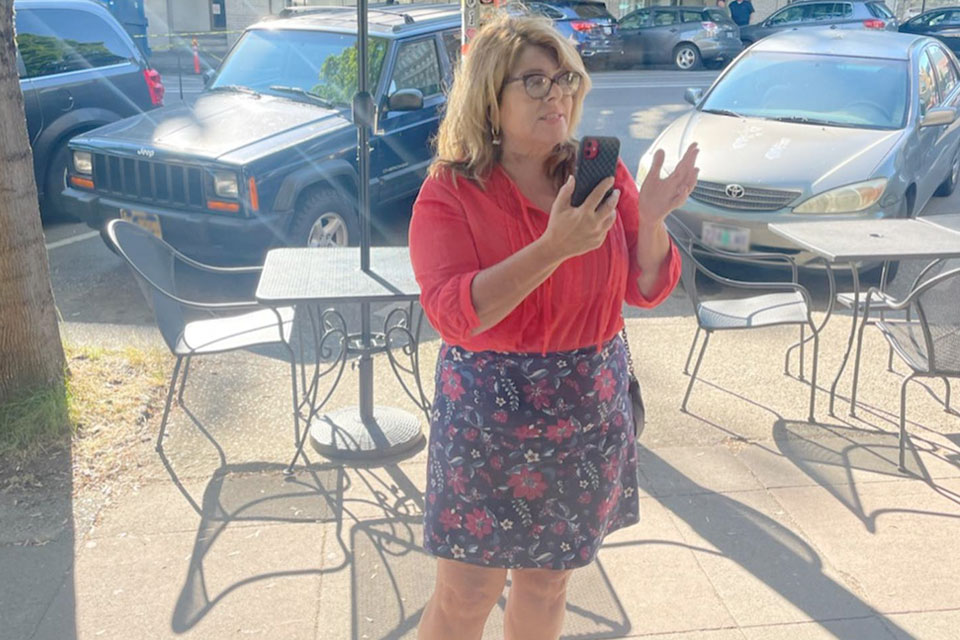 SALEM, Ore. (AP) — It’s hard to miss Epilogue Kitchen and Cocktails when walking through Salem’s downtown district. Taped to its windows are tons of signs, some of them handmade. They read: “Black Lives Matter,” and, “No Place For Hate.”

There are large portraits of George Floyd and Breonna Taylor, and in chalk marker, the names of dozens of other people killed by police in recent years.

Despite that sign, and despite having a reservation at a different Salem restaurant, Naomi Wolf in late June walked into Epilogue and argued at length with staff about their indoor dining rule.

“So she walked by, saw our signs — she decided that that meant that she needed to cause a scene,” said co-owner Jonathan Jones.

Wolf was once a well-known feminist author — she wrote the 1990 bestseller “The Beauty Myth” and advised Bill Clinton and Al Gore — who in recent years garnered online attention for spreading misinformation about the coronavirus. Her Twitter account has been disabled, but she continues to use other social media alternatives, including one targeted to American conservatives called Gettr.

That’s where she posted two videos of her late June encounter with staff at Epilogue. In one of them, two employees repeatedly ask Wolf to leave. One points to the vaccines-required sign, and they ask why Wolf decided to violate that boundary by coming inside and arguing with staff anyway.

“Well, I mean, first of all, a lot of people in this nation’s history pushed boundaries like that,” Wolf says in the video. “And it turned out to be the right thing to do.”

Speaking to one of Epilogue’s Black employees, Wolf goes on to say the indoor dining rule is “absolutely discrimination.” (By law, discrimination is prejudice or bias against a protected class of people with regards to their race, age, gender, sexual preferences, or disability status. Legally speaking, COVID-19 vaccine status doesn’t put someone into a protected class of people.)

Another video shows Jones telling Wolf that she’s been banned from the restaurant because of the way she treated his staff.

“You have been officially 86′d. If you ever come back, you will be trespassing,” Jones says.

Wolf responds: “Well, I’m only trespassing if I enter,” while appearing to stand on the sidewalk in front of Epilogue’s front doors, near its outdoor seating area.

Wolf’s videos on Gettr have hundreds of comments from people rallying to harass the restaurant. Several of them make fun of Jones’ appearance and call for violence against him. And many more call on the crowd to leave negative reviews on the website’s various online profiles. That’s when its ratings on Google and Yelp plummeted.

“We’ve had over 150 fake one-star reviews,” Jones said a week after the incident. “Most of them dive pretty quickly into racism. Pretty unbridled, gross racism.”

Jones said about 75 fake reservations were booked online within a week — made under names like “Let’s go Brandon,” a conservative code for an insult to President Joe Biden. Epilogue received hundreds of prank phone calls and hateful voicemails; Jones said he had to tell staff to stop answering the phone, so only he would have to bear the brunt of the hate.

“I will never eat at your restaurant now, later,” a woman says in a voicemail that had become typical of the type flooding the restaurant’s inbox. “I hope your business goes under.”

Like many of the callers, the woman in the voicemail seemed to be equating Epilogue’s policy of requiring vaccines to dine inside with racism. She went on to say Epilogue’s food probably “tastes like segregation.”

Created with love and art

Jones, who is Black, said the menu draws inspiration from the Black diaspora. You can get fried duck leg coated in apple butter and fig-chili vinegar, or rabbit confit flavored with jerk spices.

Jones said he and his wife opened the restaurant about 12 years ago to express themselves creatively through food and art.

“Everything we do is designed to sort of show the marks of our hands; to be a piece of our soul, our heart, our mind,” he said.

Part of that is not being afraid to show what they believe in, he said, even if that can draw unwanted — and sometimes scary — attention.

“If you sit here long enough, you will see just unbridled hatred directed at the restaurant,” Jones said.

“Every single day, people walk by. They flip us off, they yell ‘All Lives Matter.’”

Since its beginnings, Jones said, Epilogue has suffered racist graffiti and violent attacks. Much of this has been recorded on a restaurant security camera and posted to Epilogue’s Instagram account.

In one video, a man and woman appear to make a white power symbol at the camera, then walk away. In another video, a man appears to be trying to break the glass front doors, slamming into them several times. Jones said the incident cracked the glass.

Chris Young, a regular customer and friend of Jones, said racist incidents seem to have become more prevalent in Salem since the 2020 racial justice protests, but there hasn’t been much recognition of it from city leaders.

“Every once in a while, you’ll have a city councilor have some stern words in the middle of a meeting or something,” he said. “But as far as something tangible happening, something specific to address this issue, you very rarely, if ever, hear anything about it.”

Jones said he’s gone to the Salem police in the past, but he didn’t feel listened to, so he hasn’t reported the Wolf incident or the subsequent harassment.

The way he sees it, people who are driven to violence against his restaurant are angered by his very existence.

“The local hatred comes from the fact that we dare to speak our minds; we dare to create spaces and push back against the status quo of a historically white utopia,” Jones said. “And we also are excellent at the products and the service that we do, and that just absolutely drives them up a wall.”

While that may draw hate from some people, others seem to love Epilogue twice as much. Madalena Martin, a staffer at Epilogue, said the restaurant has become a gathering place for people who might feel like misfits because of their race, gender, or political ideals, especially in an area that tends to lean conservative.

“Now I’m here and I’m surrounded by other activists and other folks who are focused on the disruption of the oppression in our society … It’s just healing,” Martin said.

Jones — who is originally from the Philadelphia area — said no matter what happens, Salem is his community now, and no amount of harassment or violence will scare him away.

“They can bash our windows, they can threaten my life,” Jones said. “… I’m still going to be the excellent person that I am.”