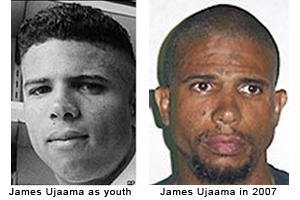 A former imam in London has lost a decisive legal appeal to avoid extradition to the United States on charges of setting up a terrorist training camp in Oregon.
Abu Hamza al Masri, 51, has already been convicted of inciting his Muslim followers to kill "nonbelievers," and counted among his flock the convicted shoe-bomber Richard Reid, convicted 9-11 conspirator Zacarias Moussaoui and several of the now-deceased suicide bombers who blew up London's underground transportation system on July 21, 2005.
The Abu Hamza extradition is the latest chapter in the controversial legal saga of Seattle native James Ujaama, whose arrest as a material witness against alleged terrorist activity was spotlighted as unconstitutional by free speech and civil liberty activists after 9-11 – years after the activities he was ultimately charged with ceased.
The issue, according to the Reporters Committee for Freedom of the Press is whether Ujaama's initial arrest and interrogations in 2002 were a violation of his rights as a U.S. citizen – or whether they amounted to a fishing expedition to capture "bigger" suspects.
"While Ujaama was held as a material witness, news media around the country wanted to tell the public why he was being held," said a report by the RCFP published in fall of 2002. "Particularly interested were media in Denver, where he was arrested in July, and in Seattle, where he was a Muslim activist. But media efforts to gain access to Ujaama's hearings and proceedings were thwarted by the courts."
"The story here was whether detention including American citizens as material witnesses – in some cases for long periods of time – is legal, constitutional or good policy," Denver Post attorney Seth Berlin told the RCFP.

Ujaama Key to Capture
U.S. law enforcement officials in England last week said Ujaama's testimony was instrumental in the U.S. government's legal victory in England last Friday, after years of working through the courts.
In fact most of Ujaama's legal documents, including his signed confessions, grand jury testimonies and records of his preliminary hearings – remain completely sealed by order of the federal government.
What the authorities cannot seal is Ujaama's past as a beloved community organizer in the Central District who organized many community institutions to keep young people away from drugs and gangs.
After his initial arrest in 2002, many of his supporters publically defended his character, including King County Executive Ron Sims.
His community work, advocating entrepreneurship as a way out of poverty, touched many lives, including that of Rep. Jesse Wineberry, who named June 10, 1994 James Ujaama Day in the state of Washington.
Nevertheless, Ujaama was convicted in December of 2007 of violating the terms of his parole by traveling to Belize on a false passport in 2006 to avoid testifying in court against Abu Hamza.
While Ujaama was never charged or convicted of any violent acts, Abu Hamza is wanted in Yemen for an unrelated crime – allegedly ordering the kidnap of a group of Western tourists that resulted in several killings.
And Ujaama is now incarcerated in a "supermax" prison in Florence, Colo.

Terrorist Camp in Bly
The Bly, Oregon conspiracy plot dates back to 1999, when, according to U.S. officials, a group of radical Muslim men traveled to a remote Klamath County town at Abu Hamza's behest to set up a training camp for followers of violent jihad against the United States.
Ujaama had moved from his native Seattle to London during the 1990s. He attended the controversial Finsbury Park Mosque in North London, where Abu Hamza was, at the time, the imam.
Later Ujaama moved back to Seattle, and with his brother, started a mosque in the Central District, where the community organized social and educational projects and, eventually, a web site advocating against the U.S. invasion of Afghanistan.
The U.S. indictments in the Bly conspiracy case – among the very few documents available to the public — say that Ujaama reportedly suggested to Abu Hamza in 1998 that Bly would make a good training camp.
According to the indictment, Abu Hamza then sent two associates to Oregon to join Ujaama and scout out the ranch – Oussama Abdalla Kassir and Haroon Rashid Aswat.
While living briefly in the dusty country town, Kassir and Aswat were pulled over by local police because of a faulty brake light. According to U.S. officials, within months all the men left Bly after determining a terror training camp was not feasible.
Nothing happened in the case until three years later, when new, post-9-11 efforts to track suspected terrorists took hold throughout the United States and Western Europe.

Material Witness Statute
Ujaama was arrested in July of 2002 at the home of a relative in Denver, but, according to an investigative report by Charlie Brennan of the Rocky Mountain News, he was transported to an Alexandria, Va. jail and held on a material witness warrant issued by an Eastern Virginia judge – a district in the area of the FBI headquarters in Quantico.
The material witness statute is designed to compel witnesses to testify in secret before a grand jury when law enforcement fears they might try to escape without testifying.
Civil rights advocates, however, charge that the statute was being used unfairly to snatch up members of the Muslim community after 9-11, hold them in secret and repeatedly interrogate them until information was obtained to charge them with criminal acts.
Ujaama's detention was so secret, his family had no idea where he was. Reporters and civil rights advocates searched the federal prison system for weeks without finding his name listed in any facility roster. One newspaper wrongly reported Ujaama was being held at the prison camp in Guantanamo Bay, Cuba.
Later, the reporter who uncovered information on Ujaama's whereabouts told the Reporters' Committee for Freedom of Speech that his investigation was "a nightmare."
"Reporters were denied access to an initial hearing that was held in Denver on July 26 to determine the legality of detaining Ujaama as a material witness, not as a criminal," the Reporters group noted.

Hamza's Extradition
Eventually the U.S. government dropped terrorism charges against Ujaama in 2003 in exchange for his agreement to cooperate with their further investigations. He served two years in prison and was released on parole.
Meanwhile, The Times of London reported that one of Ujaama's alleged co-conspirators in Bly, Oussama Abdalla Kassir, threatened his life publically if Ujaama testified in the case.
In 2006, Ujaama was arrested in Belize with a false passport. His attorney argued in court he had skipped the United States in fear for his life to avoid giving evidence against the Muslim extremists.
The court disagreed, and now Ujaama faces a 25-30 year sentence at The United States Penitentiary Administrative Maximum Facility in Colorado, alongside the most notorious criminals in the country.
Abu Hamza has one last appeal, before the British House of Lords, who are expected in July to turn him down and pave the way for his extradition to the United States.
Meanwhile, residents of Bly have repeatedly told reporters they don't believe there was any danger there from Ujaama or anyone else.
"This is Bly, Ore., not New York City," local gas station owner Dean Lawrence told USA Today. "I think the whole thing is a crock."