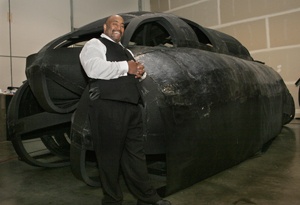 Some say it looks like a space ship, others a Rose festival parade float under construction, but S.S.H. Bell calls it a "transportation revolution." He is building a 24 ft. electric boat, at Jantzen Beach. The zero emissions boat framework is constructed of commercial grade polyfoam, which makes it about less than 1/3 of the weight of its traditional fiberglass counterpart. Bell says that he designed the craft with family safety in mind. It has two pontoons that will house bedrooms and a salon with a kitchen. He projects the boat will get its "skin" and be seaworthy in a few short weeks. Bell says the boat, when completed, will be able to travel in the open ocean. He plans to take it from Jantzen Beach to Europe to prove just that.