Felix Gets a Bronze on Her Farewell at World Championships 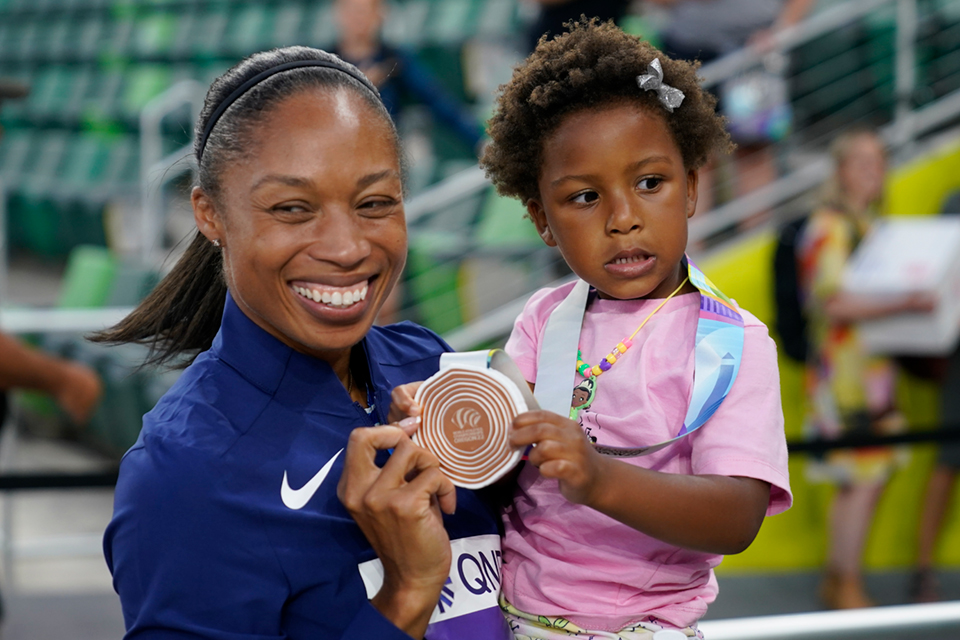 EUGENE, Ore. (AP) — Never mind that she got passed at the end of her last sprint around the track. Or ended up with a bronze medal instead of gold.

For 15 memorable seconds Friday night at the world championships, Allyson Felix was sprinting alone in the sunshine, cruising past the stands and far ahead of the field down the backstretch. A few minutes later, she was taking her newly won prize and hanging it around her 3-year-old daughter's neck.

“I felt the love,” Felix said of her final run on the big stage. "And I felt joy running tonight.”

She’s 36 now. So it was no huge shock that a runner 11 years her junior, Marileidy Paulino of the winning Dominican Republic team, eventually reeled her in. No big shame, either, that the U.S., saving the rest of its vaunted star power for big races over the next nine days of this meet, finished third in the mixed 4x400 meter relay, also behind the Netherlands.

The third-place finish still gave Felix her 19th medal at world championships, extending a record she already held. Adding it to the 11 she’s taken at the Olympics, she’ll end her career with an even 30 at her sport’s biggest events.

Some might say a bronze medal feels like a letdown for the most decorated sprinter in U.S. history. Others, though, including Felix herself, compare it to the bronze she won in the women's 400 last year at the Tokyo Olympics — a medal she ranks as one of her most cherished triumphs.

“It's a similar emotion,” she said. “The last couple of years, I’ve stepped outside of just the clock and the medals, and I never would have imagined that would have been a place where I would come to.”

The once-shy teenager is now an outspoken advocate for women and moms both in and out of sports. Much of that stemmed from becoming a mom, then fighting, and eventually leaving, Nike, which cut her salary while she was pregnant.

Felix also had an emergency C-section eight weeks short of her due date. It left both her and her daughter, Cammy, fighting for survival in a hospital room. Any running at all, let alone medals to go with it, feel like a bonus at this point.

“There's not one single story that can explain the impact that she had on the sport,”

said Elijah Godwin, who ran the first leg and was the last teammate to hand the baton to Felix. "Over the span of the years she did it, she became an icon, and for us to come out and compete with her, it's a blessing to have that opportunity."

Google got into the act. A search of Felix's name Friday night brought up all her credentials, overlaid by animation of her sprinting across the computer screen followed by the words “Olympian. Mother. Advocate.”

All part of a fitting finale for Cammy's mom, who, Felix said, was certainly out getting ice cream after the race, not waiting backstage for mom to finish interviews.

Felix was entered only in the mixed relay after failing to qualify for the worlds in an individual race. When her name was announced at the beginning, the two-thirds-full house at the first world championships to be held in the United States cheered as loudly as they had all night.

Until, that is, she hit the backstretch.

Godwin had a slim lead when he passed her the baton, and for the first 200 meters of her final lap around the track, Felix extended the margin. Her arms were pumping and knees were kicking high with that near-perfect form that can only belong to her. But she faded after she rounded her final curve and was caught by Paulino.

Her feelings as she crossed the line?

“The first thing I felt was lactic acid,” she said. 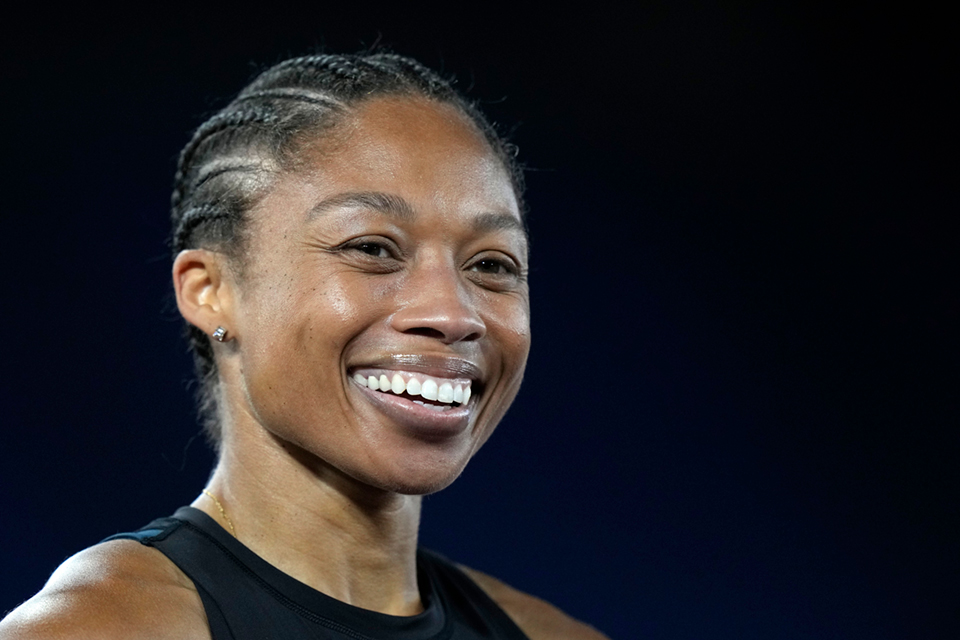 Vernon Norwood recaptured the lead on the third leg, but the Domincan's Fiordaliza Cofil overtook American Kennedy Simon on the anchor, and then hurdler Femke Bol made a huge late charge to give The Netherlands the silver. The Dominican Republic won in 3 minutes, 9.82 seconds, with a margin of 0.08 seconds.

“I’ve defeated her two times,” said Paulino, who finished second in the 400 in Tokyo.

"But for me she will always be the best in the world. She has opened a better path for all of us.” 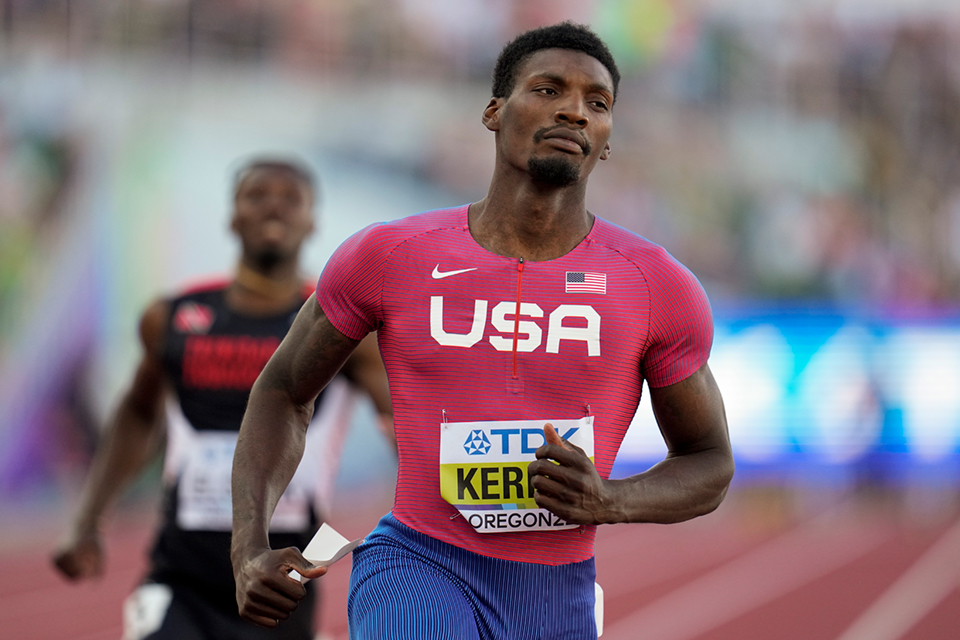 American Fred Kerley, last year's Olympic silver medalist, finished his race in 9.79 seconds — a blazing-fast time for a preliminary round that was only 0.03 off his season high and was 0.01 faster than Italian Marcel Jacobs' victory last year in Tokyo.

All the other big names advanced: Jacobs, Marvin Bracy, Olympic bronze medalist Andre De Grasse, 2011 world champion Yohan Blake and Christian Coleman, who is defending his world title after missing the Olympics because of a suspension related to missed doping tests.

The meet's first medals came in the 20-kilometer race walk, where Kimberly Garcia won Peru's first-ever medal at the worlds in a time of 1:26:28. Toshikazu Yamanishi of Japan successfully defended his men’s title in 1:19.07.

But it was the night's last medals that everyone at Hayward Field will remember. 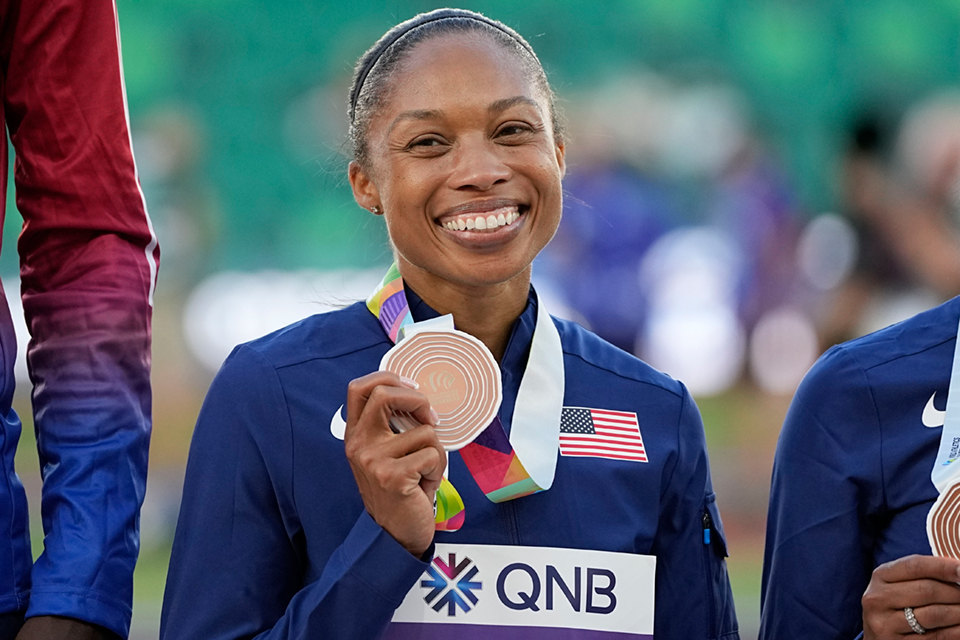 Felix smiled widely as World Athletics president Sebastian Coe hung the bronze around her neck and second gentleman Douglas Emhoff, on hand for the presentation, shook her hand.

Felix stood straight as the Dominican Republic's national anthem played. But she felt like the winner. Her last race in the big-time came in her home country, with her daughter there to watch.

“Obviously, I'm not in the prime of my career, but to be able to finish here tonight, with Cammy in the stands, and to share that moment with her, it means a lot," Felix said.