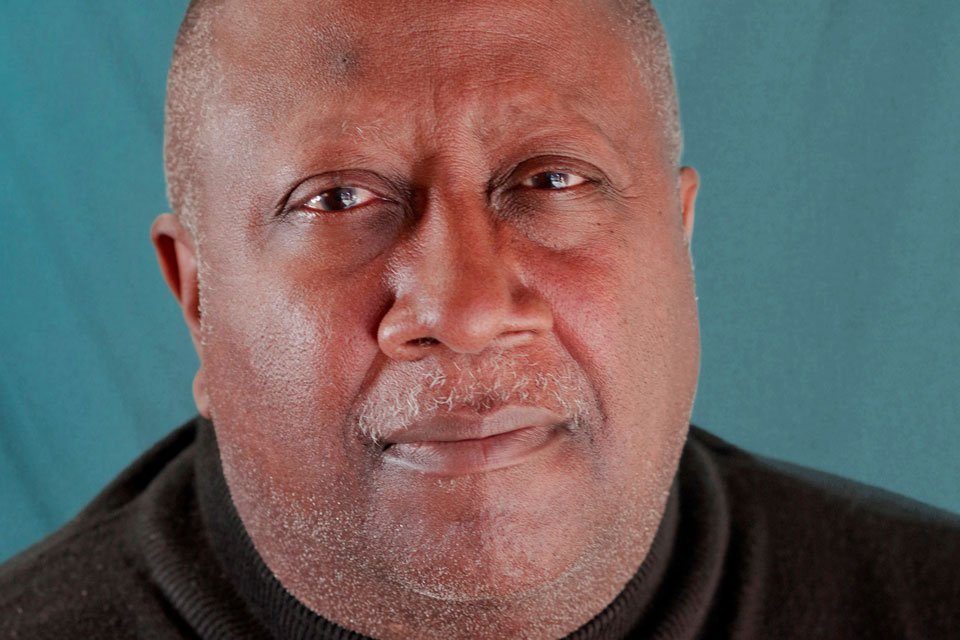 Poet Emmett Wheatfall retired from his day job at the end of 2019, narrowly avoiding the rapidly changing workplace culture that often demanded mental compartmentalization amid an unprecedented pandemic. But he didn’t stop working.

“I had time,” Wheatfall told The Skanner.

“I had time to burn the candle late at night, trying to write…the pandemic just dominated our minds, and as I thought about it, I would get a phrase. And then those phrases would expand, and I’d work with them.”

The resulting volume of verse, With Extreme Prejudice: Lest We Forget, serves as both a living chronicle of his experience during the outbreak and a reminder that it isn’t over, regardless of cultural fatigue.

“I wrote it because I didn’t want us to forget,” Wheatfall said.

“I think we’re forgetting. And it may be a precursor to another volume later that takes a look at where we are now: We’re not sheltering in place to the degree that we were. We’ve removed masks. We have vaccines. People now don’t want to go back into an office, they want to work from home.

“I often think of the book title Love in the Time of Cholera. It was about a time, and this is a snapshot in time. And poetically, I hope we would not forget.”

The former assistant county administrator for Clackamas County long balanced his professional life with his work as a minister with his small non-denominational church, Remember the Hope, located in Northeast Portland; with faith-based activism; and with a growing catalog of poetry, with his two previous volumes – As Clean as a Bone (2018) and Our Scarlet Blue Wounds (2019) – published by Fernwood Press, a Barclay Press imprint located in Newberg.

“My previous works were really collections of sociological, sometimes economic, sometimes racial (themes) – As Clean as a Bone and Our Scarlet Blue Wounds were kind of diverse portraits,” Wheatfall said. “This one was more thematic, so there’s a plum line that runs through it, and the plum line is pretty much the COVID-19 pandemic.”

He has set much of his work to music, laying down tracks on four albums that feature local musicians from the blues, gospel and jazz genres. Since 2014, he has sat on the nomination committee that selects Oregon Poet Laureates.

In other words, Wheatfall has spent a lot of time thinking about the role of poetry in our current political climate.

“I believe that poets are the secular prophets in our world today,” Wheatfall said.

“What I mean by that is we live in a day where our religious leaders are really ineffectual compared to where they were 30, 40 years ago. We are divided on the political spectrum. But going back to the bards and troubadours, it seems as if whenever there have been major social or political problems in the world, it was the poets that people listened to.”

“We are able to speak, and people will listen,” he said. “You look at Amanda Gorman, she comes out at the inauguration, and she’s almost like the next Maya Angelou of this time, because she spoke a poetic verse. People who never thought about poetry, they read her now.

"What has really helped poetry is young people and spoken word.

"I am blown away – our young people are knowledgeable, and you hear it in their spoken word work.”

But Wheatfall challenges what he views as sometimes naive calls for radical action.

“When I hear young people, especially in the poetry world, talking about revolution, I try to remind them that it’s great to be passionate about change,” he said. “But you’ve never fired a gun, you’ve never had to use a bayonet, you’ve never been wounded, so temper, to a degree – the imagery and the idealism, versus the reality of those things.

“Imagine for a moment the insurrection on Jan. 6. Those folks romanticized liberty. They thought back to 1776. The reality is, people were injured, killed, democracy was threatened, and history will not look kindly on them. So there’s a difference between romanticizing the ideal of revolution, but the practicality and reality can be way different.”

As a title, With Extreme Prejudice: Lest We Forget is evocative of many of the themes Wheatfall has explored in the past: issues of race, of socio-economic justice. But the phrase’s nihilistic subtext resonated with Wheatfall as he sought to encapsulate his reflections on living through COVID-19.

“Back in the early stages of the unfolding of the pandemic, we all remember how frightening it was and how so many lives were being touched in a mortal way,” Wheatfall said. “I remembered the phrase ‘with extreme prejudice’ as a military kind of terminology, which denotes that once you’ve been given the license to prosecute with extreme prejudice, that means you’re going to wipe everything out, everybody.

“I thought about during that time how many lives we were losing in senior homes and assisted living. There was no discrimination, whether you were a child or an elderly or a healthy person, and that whole concept just kind of overlaid the pandemic in its early days.”

In a review of With Extreme Prejudice, Portland poet A. Molotkov characterized Wheatfall’s work as “observational truth-telling,” a description Wheatfall embraces.

In this style, Wheatfall’s “Freddy’s Stimulus Check” describes the poet enjoying three square meals a day and managing his investments while so many others – Black Americans disproportionately among them – struggle with financial insecurity.

In "Every Nation Under the Sun," Wheatfall refers to COVID-19 as "The greatest hitchhiker on earth.../making its rounds."

“It moves throughout the world unimpeded,” he told The Skanner. “It finds the ride and it will hop on a train and go as far as the train will take it…

“The genesis flowed out of being in the moment,” Wheatfall said of his newest volume. “I was in the water when the water got turbulent, and I figured out how to swim.”