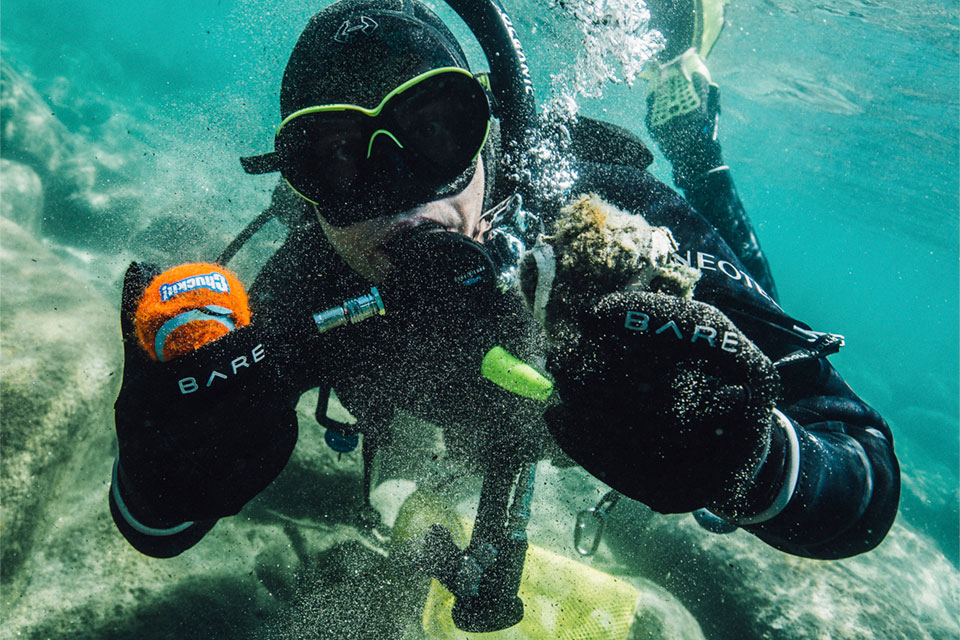 STATELINE, Nev. (AP) — They found no trace of a mythical sea monster, no sign of mobsters in concrete shoes or long-lost treasure chests.

But scuba divers who spent a year cleaning up Lake Tahoe’s entire 72-mile (115-kilometer) shoreline have come away with what they hope will prove much more valuable: tons and tons of trash.

In addition to removing 25,000 pounds (11,339 kilograms) of underwater litter since last May, divers and volunteers have been meticulously sorting and logging the types and GPS locations of the waste. 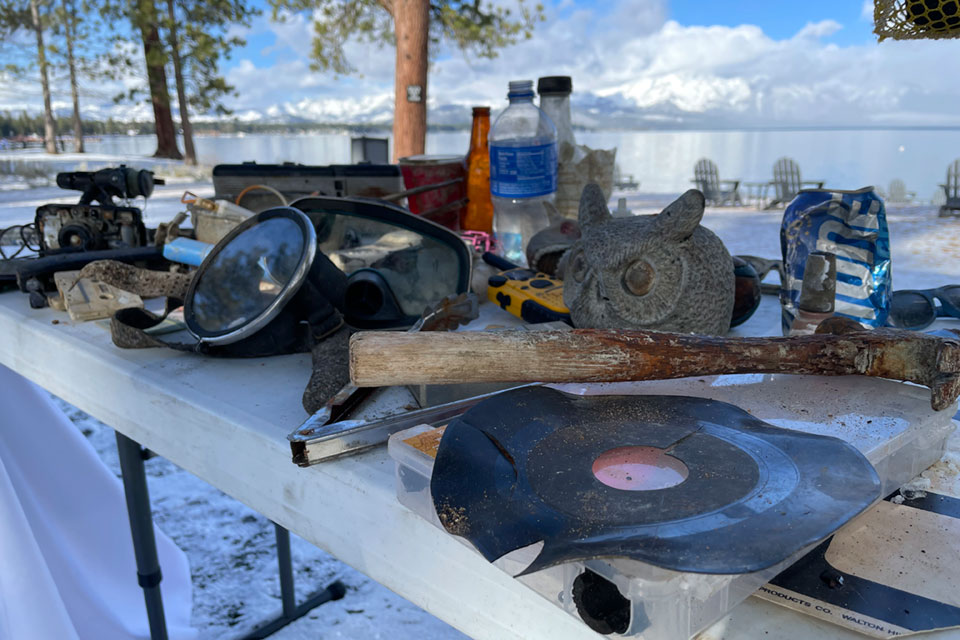 Debris and garbage collected during the year-long Lake Tahoe cleanup is displayed in Stateline, Nev., Tuesday, May 10, 2022. They found no trace of a mythical sea monster, no sign of mobsters in concrete shoes or long-lost treasure chests. But scuba divers who spent the past year cleaning up Lake Tahoe's entire 72-mile (115-kilometer) shoreline have come away with what they hope will prove much more valuable: tons and tons of trash. (AP Photo/Haven Daley)

The dozens of dives that concluded this week were part of a first-of-its-kind effort to learn more about the source and potential harm caused by plastics and other pollutants in the storied alpine lake on the California-Nevada line.

It's also taken organizers on a journey through the history, folklore and development of the lake atop the Sierra Nevada that holds enough water to cover all of California 14 inches (36 centimeters) deep.

The Washoe Tribe fished the turquoise-blue Tahoe for centuries before westward expansion in the mid-1800s brought railroads, timber barons and eventually Gatsby-like decadence to what became a playground for the rich and famous.

Tahoe’s first casino was built in 1902 by Elias J. “Lucky” Baldwin, who owned a big chunk of east Los Angeles and built the prominent Santa Anita horse track in 1907. Massive lakefront estates followed for decades, including one used for the filming of “Godfather II."

Cleanup organizers say one of the things locals ask most is whether they’ve found any gangsters’ remains near the north shore. That’s where Frank Sinatra lost his gaming license for allegedly fraternizing with organized crime bosses at his Cal-Neva hotel-casino in the 1960s.

The recovered debris mostly has consisted of things like bottles, tires, fishing gear and sunglasses.

But Colin West, founder of the nonprofit environmental group that launched the project, Clean Up the Lake, said there have been some surprises.

Clean up the lake

They've also turned up a few “No Littering” signs, engine blocks, lamp posts, a diamond ring and “those funny, fake plastic owls that sit on boats to scare off birds,” West said.

“It’s shocking to see how much trash has accumulated under what appears to be such a pristine lake,”

said Matt Levitt, founder and CEO of Tahoe Blue Vodka, which has contributed $100,000 to the cleanup.

His businesses is among many — including hotels, casinos and ski resorts — dependent on the 15 million-plus people who visit annually to soak up the view Mark Twain described in “Roughing It” in 1872 as the "fairest picture the whole earth affords.”

“It is our economic engine,” Levitt said.

And while most contributors and volunteers were motivated primarily to help beautify the lake, it’s what happens once the litter is piled ashore that excites scientists.

Shoreline cleanups have occurred across the nation for years, from Arizona to the Great Lakes, Pennsylvania and Florida. But that litter goes into recycle bins and garbage bags for disposal.

Each piece from 189 separate Tahoe dives to depths of 25 feet (8 meters) was charted by GPS and meticulously divided into categories including plastic, metal and cloth.

Plastics are key because international research increasingly shows some types can break down into smaller pieces known as microplastics.

Scientists are still studying the extent and human harm from the tiny bits. But the National Academy of Sciences said in December the U.S. — the world’s top plastics-waste producer — should reduce plastics production because so much winds up in oceans and waterways. 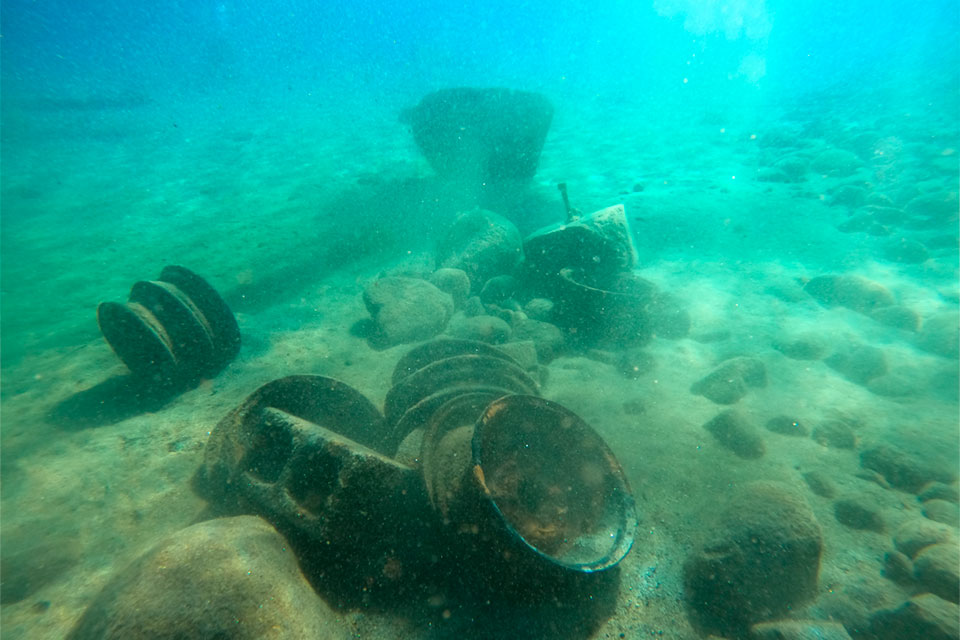 This photo provided by Clean Up The Lake shows an example of GPS located heavy lift trash items in the fall of 2021, in Lake Tahoe, Nev. They found no trace of a mythical sea monster, no sign of mobsters in concrete shoes or long-lost treasure chests. But scuba divers who spent the past year cleaning up Lake Tahoe's entire 72-mile (115-kilometer) shoreline have come away with what they hope will prove much more valuable: tons and tons of trash. (Clean Up The Lake via AP)

Zoe Harrold, a biochemist, led scientists at the Desert Research Institute in Reno that first documented microplastics in Tahoe in 2019. She was the lead author of Clean Up the Lake’s 2021 report on a 6-mile (10-kilometer) pilot project.

“If left in place, the ongoing degradation of submerged litter, particularly plastic and rubber, will continue to slowly release microplastics and leachates into Lake Tahoe’s azure waters,” Harrold wrote.

The cleanup comes a half-century after scientists started measuring Tahoe’s waning clarity as the basin began to experience explosive growth.

Most credit, or blame, completion of the interstate system for the 1960 Winter Olympics near Tahoe City. The first ever televised, it introduced the world to the lake surrounded by snow-covered peaks.

“The majority of what we’re pulling out is a result of basically just the human impact of recreating, living and building a community here in the Lake Tahoe region,” West said.

His group plans dives this year at other Sierra lakes, including June Lake east of Yosemite National Park, and will expand future Tahoe searches to deeper depths.

The non-profit Tahoe Fund, which also helped raise $100,000 for the cleanup effort, is commissioning artists to create a sculpture made from Tahoe's trash at an events center being built in Stateline, on the lake's south shore.

"Our hope is that it will inspire greater environmental stewardship and remind those who love Lake Tahoe that it's up to all of us to take care of it,” Tahoe Fund CEO Amy Berry said.