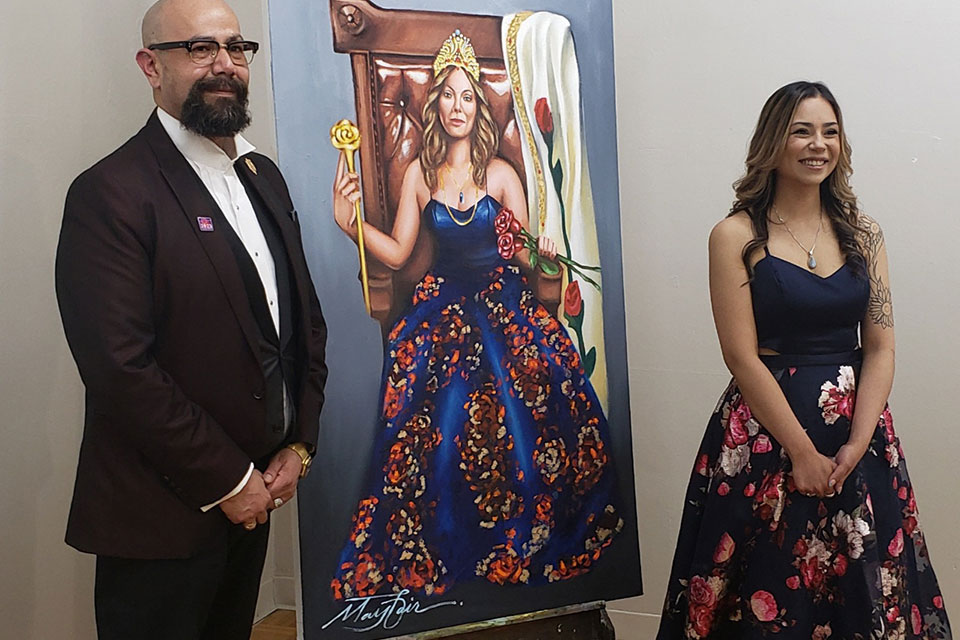 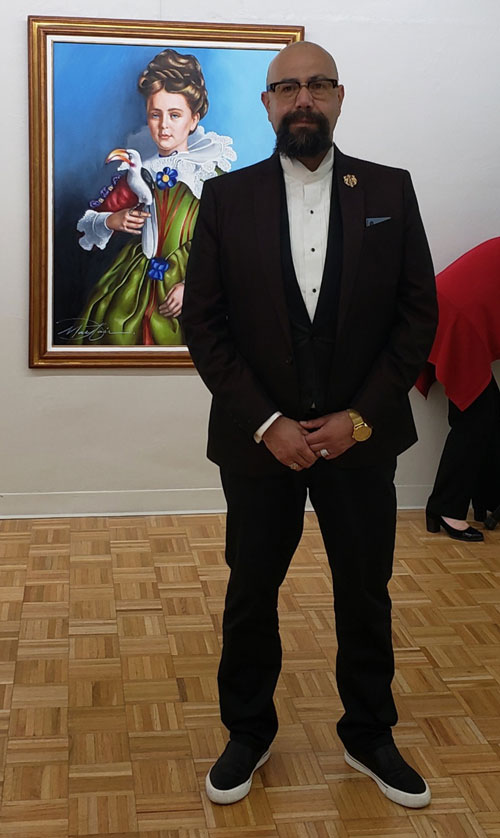 Omar Pleitez, aka Mayfair the Artist. (Photo/courtesy of Mayfair)“I don’t paint women that smile,” Omar Pleitez says. “I like to have confident, strong women in the piece because I feel that their beauty already gives them that privilege of looking at them. In all my pieces you don’t know whether they’re angry or whether they’re looking right beyond you.”

Pleitez, who works under the name Mayfair the Artist, brought that Mona Lisa steeliness to the Crown of Rosaria portrait commissioned by the Portland Rose Festival this year. Marking the centennial anniversary of the Crown of Rosaria is a stately queen wearing the ornate crown gifted by the Business and Professional Women’s Club of Portland 100 years ago and holding the iconic rose scepter.

She also happens to be a woman of color sitting on an ornate leather throne, painted in a style that evokes both fine art and street art.

“I’ve been in the art scene going on 12 years now, and to finally have the recognition from an audience that typically isn’t exposed to my work, is brand new,” Pleitez told The Skanner. “Because I’m a graffiti kid. I grew up doing graffiti in L.A., and I’m mainly self-taught.”

Pleitez was born in El Salvador and moved with his family to Los Angeles when he was four. He grew up in an all-Black and Mexican community.

"I picked the lesser of two evils,” he said.

Fatherhood at the age of 17 put an end to the graffiti, and Pleitez went to school to become a dental assistant. Years later, a cousin pointed out that he could do graffiti on canvas, a moment he recalls as “mind-blowing.”

“Then I taught myself how to use oils, and after that I never turned back,” Pleitez said. “The first painting took four months, and it was the size of a vinyl [record] cover. And now it takes me four months to paint the piece that I unveiled today, which is about the size of a door.”

Pleitez began taking portrait workshops in 2008, which he saw as a natural next step in his growth as an artist.

“As a graffiti kid, growing up, you either do lettering or you do characters. I did characters. I did cartoon characters with weird figures, b-boys and b-girls, so you just gravitate toward skin tone. And then you’re learning and starting to build on how difficult your technique could be. Once I started teaching myself how to use oils, the gradual and most obvious turn to that was painting women. Just because, when it comes to oils, that was just the most natural transition.

“The Renaissance is kind of my jam right now"

"Just because it’s the most difficult kind of outfits to paint, just because silk and satin and the fold and the creases that come with it is insane,” he said. “But now I’m trying to bring it into a more contemporary feel where it’s more modernized, because I think now it’s not just about color, it’s not just about theme, and to be quite honest with you, even though those pieces are beautiful, those old Renaissance pieces, they look like old-ass paintings. It’s an old-timey look to them. We need to modernize the hell out of them and bring it to this kind of generation.”

It was his mastery of these disparate techniques and aesthetics that caught the attention of Rose Festival organizers.

“I had a show at Portland Open Studios,” Pleitez said. “In one of my pieces I have this one girl sitting on a chair with a baby pitbull on her lap, but she has this really, really thugged-out look to her, but she’s in a dress. She has this huge afro, and she’s not looking at you, she’s looking through you. She is basically commanding the crowd just by the look, and the puppy gives her this softness. The Portland festival people saw this piece and said, ‘That’s what we want. We want this confidence, we want this kind of posture, we want whatever you have here, copy it, give us a girl in a crown.’ They just allowed me to do me.

“Because it is a strong institution and very much a Portland staple, I wanted to give them something completely untraditional. Something unconventional. All the previous portraits were a certain size. I wanted it massive. I paint huge. And all your portraits are from shoulder-up. I’m going to give you a full body. All of your pieces don’t have a focal on the background, the composition, it’s just the woman’s shoulder and up. They’re more worried about the individual rather than the message. And yes, it’s a cute girl, she won the crown and that’s great. But when you look at all of them together – and these are beautiful paintings, beautiful women, beautiful technique – but they all look stagnant because they’re all the same kind of composition, they all have the same look to them. I want to give you folks a statement piece, something that is just going to tell a story. Just by looking at her you’re going to wonder, what is this all about?”