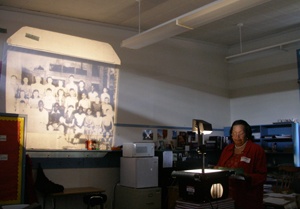 Nearly 12 hours later, residents were running for higher ground. The dike at Smith Lake had failed and now the entire town, nearly 15 feet below the level of the Columbia River, was rapidly filling with water.

It was a day Regina Johnson Flowers and Edward Washington, as well as about 17,000 other residents, would never forget. Built in a matter of months, the city of Vanport  was destroyed in a matter of minutes.

Nearly 60 years ago, on what is now Delta Park, sat the homes, schools, stores and lives of thousands of Black and White families. At its height in November 1944, Vanport, Ore. was home to about 26,656 Whites and 5,808 Blacks. It is a town that has now been largely forgotten, if not for the memories, pictures and records of its 5-year intercultural existence. They had integrated schools, recreation facilities and public places, but segregated apartment units.

While most of the adults who lived in Vanport have now died, many of their children remain to tell the story of the flood that claimed an entire town.

Many of the students at Vernon School had never heard of the fabled city – and Ms. Flowers was quick to tell them, "It did exist." Perhaps it's because no physical evidence of the city that once housed Edgar Kaiser's shipyard workers now stands – whatever the reason – several classrooms at Vernon School were treated to firsthand accounts of the flood's suvivors.

Right before the dike broke, Washington said his family was walking toward the river to watch the raging waters when the sirens sounded. Flowers remembers her mother telling her to fill a suitcase with essentials – her 8th grade graduation dress, shoes and slacks.

"And we were gone," she said. "People were just running."

According to the "History of Portland's African American Community" by the City of Portland, it took 10 minutes from the moment the dike broke until the effects of the water became visible. The Sunday flood officially claimed the lives of 13 people – a number that seems small to Flowers and to other survivors. She said many people living in Vanport did so unofficially.

What to do after the flood waters receded was another matter. Portland had been experiencing a housing shortage for years; Vanport was built by Henry and Edgar Kaiser to house the influx of shipyard workers. With the city gone, Flowers said thousands of families were now forced to stay temporarily in the guest rooms of friends, churches or other sanctuaries until they could find permanent housing – a search hampered by segregation and red lining.

"Some Whites were very nice," she said, while others were "not particularly open to housing African American people."

Washington said it took three years before his family was able to finally find permanent housing; Flowers' family was helped by public housing, which helped thousands of families get back on their feet. Others left the city entirely.

"The city could have done a better job," Flowers said. "There was no place for the average African American family."

Washington said he was consumed with the thoughts that seemed so pressing for a child.

"Was I ever going to see any of my friends again?" he remembers thinking.

The Vanport speakers came to Vernon School at the request of PSU student Tyler West who has been working at the school to build cultural awareness and bring mentors from the community. West is the president of the Vernon PTSA and also volunteers at the school.

"I'm giving them a piece of history," said West. "(History classes) don't teach them about the unsung heroes."