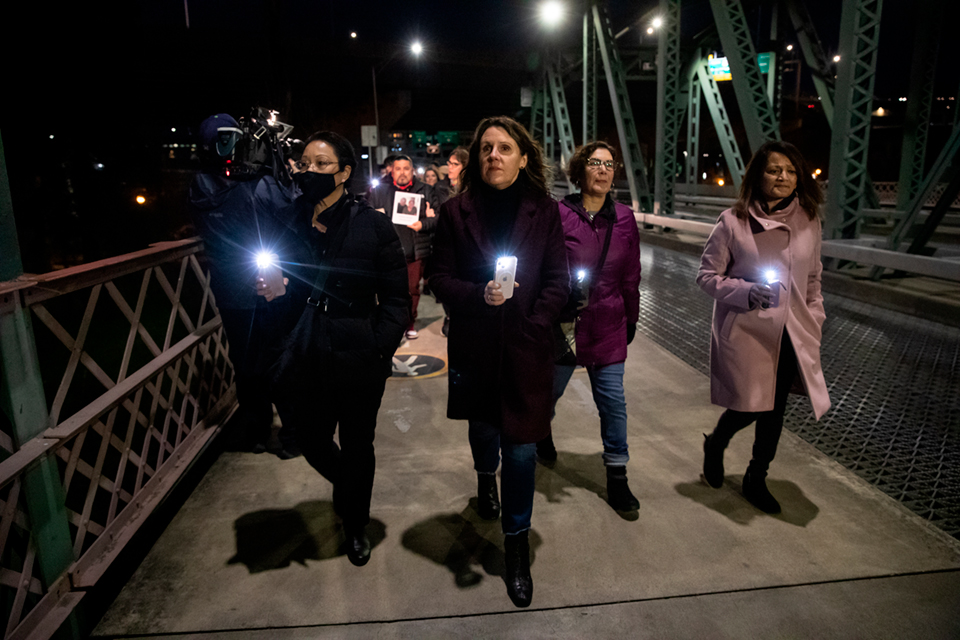 PORTLAND, Ore. (AP) — With COVID-19 case numbers plummeting, Emily Safrin did something she hadn’t done since the pandemic began two years ago: She put her fears aside and went to a concert.

The fully vaccinated and boosted restaurant server planned to keep her mask on, but as the reggaeton star Bad Bunny took the stage and the energy in the crowd soared, she ripped it off. Soon after, she was strolling unmasked in a trendy Portland neighborhood with friends.

Two years after the World Health Organization declared COVID-19 a pandemic, changing the world overnight, relief and hope are creeping back in after a long, dark period of loss, fear and deep uncertainty about the future.

“Everyone was supposed to be vaccinated or have a negative test, and I said, ‘What the heck, I’m just gonna live my life,’” Safrin said of her concert experience. “It was overwhelming, to be honest, but it also felt great to be able to just feel a little bit normal again.”

The world is finally emerging from a brutal stretch of winter dominated by the highly contagious omicron variant, bringing a sense of relief on the two-year anniversary of the start of the pandemic.

It was March 11, 2020 when the WHO issued its declaration, driving home the severity of the threat faced by a virus that at that point had wreaked havoc primarily in Italy and China. The U.S. had 38 confirmed coronavirus deaths and 1,300 cases nationwide on that date, but reality was starting to sink in: stocks tanked, classrooms started closing and people began donning masks. In a matter of hours, the NBA was canceling games, Chicago's huge St. Patrick's Day parade was scuttled and late-night comedians began filming from empty studios — or even their homes.

Since then, more than 6 million people have died globally, nearly 1 million in the U.S. Millions have been thrown out of work, students have endured three school years of disruptions. The emergence of the vaccine in December 2021 saved countless lives but political divisions, hesitancy and inequality in health systems have kept millions of people around the world from getting inoculated, prolonging the pandemic.

The situation is improving, however.

Hospitalizations of people with COVID-19 have plummeted 80% in the last six weeks across the U.S. since a mid-January pandemic peak, dropping to the lowest levels since July 2021, according to data from the Centers for Disease Control and Prevention. Case counts have followed the same trend line to the lowest counts since last summer as well. Even the death tally, which typically lags behind cases and hospitalizations, has slowed significantly in the last month.

In its latest pandemic report, the WHO said infections and deaths are down across the globe, with only one region — the Western Pacific — seeing a rise in cases. The Middle East and Africa saw cases drop by 46% and 40%, respectively. 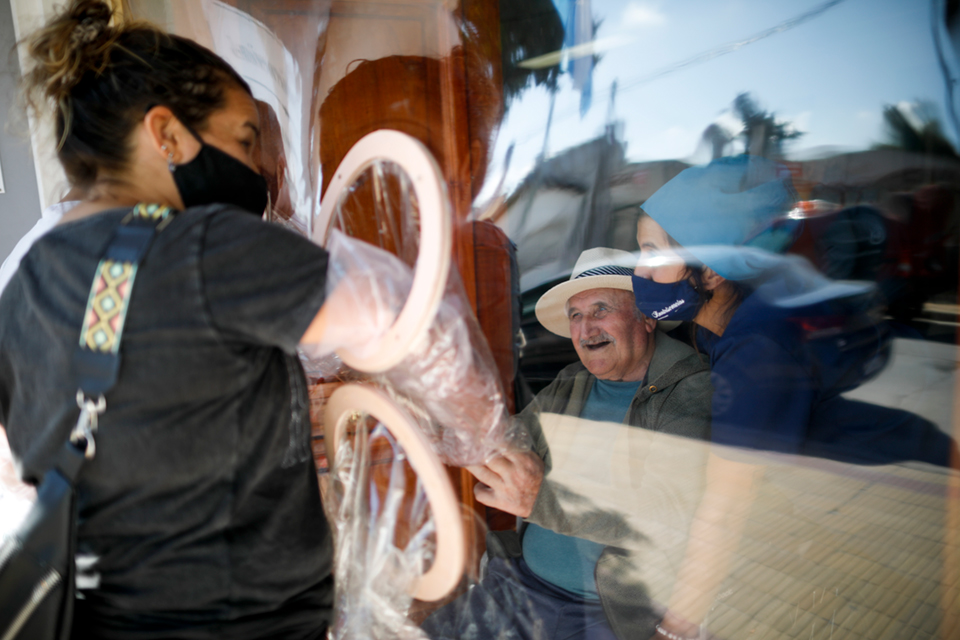 Debora Aberastegui holds the hands of her father Pedro Aberastegui through a plastic sleeve at the Reminiscencias residence for the elderly in Tandil, Argentina, Monday, April 5, 2021. Residents here do not have physical contact with their families or leave the residence due to the COVID-19 pandemic, but stay active with group activities within the facility. (AP Photo/Natacha Pisarenko)

Another positive: The omicron wave and vaccinations have left enough people with protection against the coronavirus that future spikes will likely require much less disruption to society, experts say.

Nowhere is the shift in the pandemic more apparent than in the nation's hospitals, where critical care units were overflowing with desperately ill patients just months ago.

COVID's toll on the medical field

Julie Kim, chief nursing officer at Providence St. Jude Medical Center in Fullerton, California, gets emotional when she recalls the bleakest days of the pandemic when doctors and nurses worked around the clock and didn't go home because they were afraid of bringing the virus back with them.

At one point during the summer 2020 spike, there were 250 COVID-19 patients in the hospital licensed for 320 beds and the hospital had to use offices for overflow bed space. 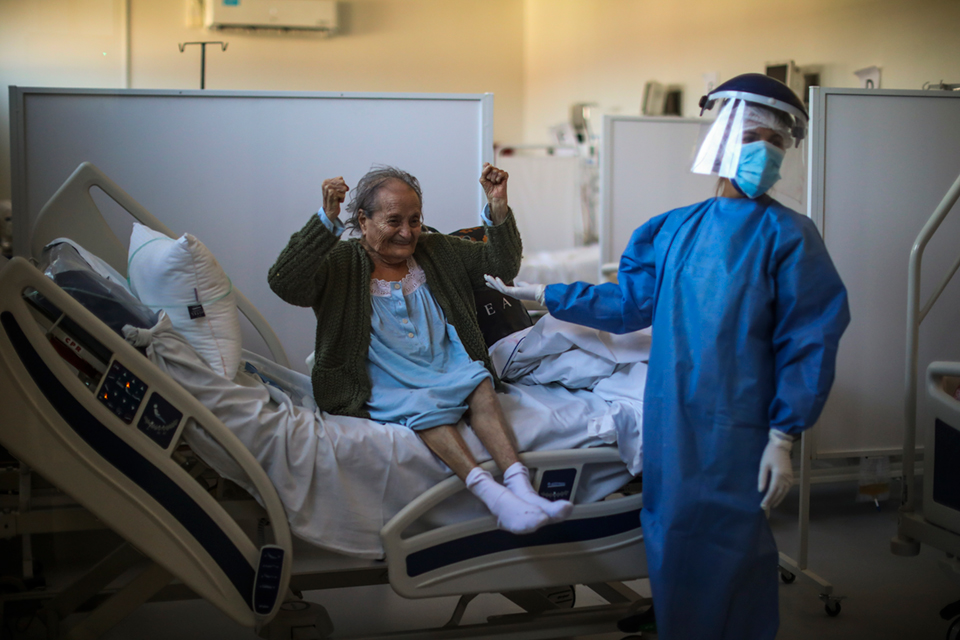 Blanca Ortiz, 84, celebrates after learning from nurses that she will be dismissed from the Eurnekian Ezeiza Hospital, on the outskirts of Buenos Aires, Argentina, on Aug. 13, 2020, several weeks after being admitted with COVID-19. (AP Photo/Natacha Pisarenko)

The pandemic has eased to the point that as of Tuesday, there were just four COVID-19 patients at the hospital, Kim said, and medical staff feels more prepared to treat the disease with the knowledge gained in those darkest days. Still, many are traumatized by the raw memories of the past two years and will never be the same, she said.

Mask mandates, vaccine requirements and other COVID-19 measures are being eliminated everywhere. The last statewide mask mandate in the U.S., in Hawaii, will end in two weeks.

But health experts are also urging some caution.

Dr. Albert Ko, an infectious-disease physician and epidemiologist at the Yale School of Public Health, said it’s certainly good news that the U.S. seems to be at the tail end of a peak. But he cautioned against any victory declarations, especially with the potential of another variant lurking around the corner. 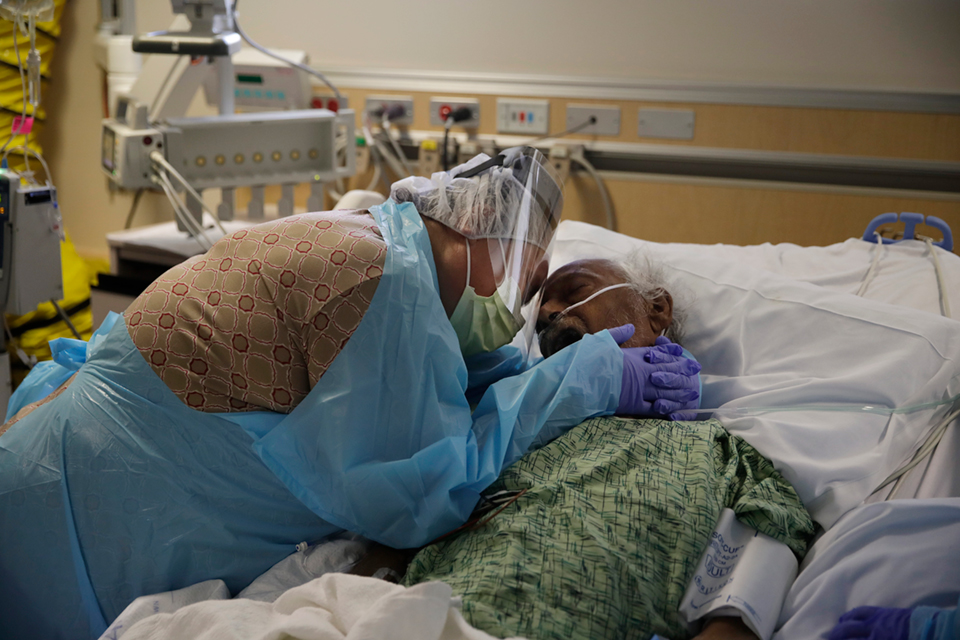 In Portland, people are heading back to movie theaters, concerts and gyms after a long, dark winter and bars and restaurants are filling up once more. Safrin said many customers are telling her it's their first time dining inside in months.

Kalani Pa, who owns an Anytime Fitness franchise with his wife in the Portland suburbs, said the past two years almost drove him out of business — but with Oregon's mask mandate ending Friday, his small gym is suddenly coming to life again. The franchise signed three new members on one day alone this week and a coffee shop opened this week next to the gym in a space that sat vacant for months, driving up foot traffic.

“Sometimes things have got to get worse before they get better," Pa said before rushing off to give a tour to a new member.

Demand for testing is down, too.

Jaclyn Chavira remembers the fear on peoples’ faces as they lined up by the thousands in Los Angeles to be tested during the late 2020 surge, which triggered an astonishing 250,000 infections and more than 3,000 deaths a day across the U.S. at the peak.

Infections raced out of control for weeks and some days the line of cars at the Dodger Stadium test site, one of the largest in the nation, stretched for nearly two miles.

At the height of the omicron surge, Chavira's nonprofit called CORE did 94,000 tests a week at 10 sites in Los Angeles County. Last week, they conducted about 3,400 and most of them were for work or travel requirements — not because the person was sick, she said.

“You can sense the relief," said Chavira.

Not everyone, however, is ready to dive back in. Many remember last year when mask rules eased and COVID-19 seemed to be loosening its grip only to come roaring back as the delta and omicron variants took hold.

Amber Pierce, who works in a Portland bar-restaurant, was out of work for almost a year due to COVID-related layoffs and narrowly dodged an infection herself when the virus swept through her workplace. A regular customer died during this winter’s peak, she said.

She still wears a mask even when outdoors and was eating pizza outside on a recent day only because her brother was visiting for the first time in more than a year.

“I’m going to make sure that there’s not a spike once those masks come off and everyone starts, you know, feeling comfortable,” she said, as she applied hand sanitizer.

“It's still the anxiety of it," she said. “Either way, it’s going to hit you whether you get really sick or not.”