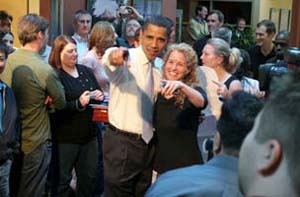 On Tuesday night, Sen. Barack Obama exceeded the number of delegates needed to win the Democratic nomination for the presidency. A last minute surge of superdelegates endorsing Obama pushed the candidate past the needed 2,118 votes, effectively making Obama the first African American to be a serious contender for the office of the presidency. Sen. Hillary Clinton has not dropped out of the race, although she is rumored to have talked with Obama about the possibility of becoming his running mate and said in the past she would accept a vice-presidential nomination if Obama were to offer it. The presidential candidate is pictured here with an unidentified supporter during his trip to Portland this May.