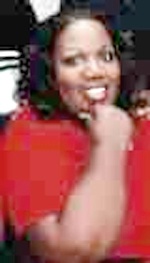 Genetta Williams was born on Oct. 26, 1961 in Portland, Oregon, to Mary Glen Ola Williams -McSwain and the late Deacon L.C. Williams.  She died on May 26, 2008. She was 46.
She was a member of Philadelphia Community Missionary Baptist Church under the leadership of the late Pastor B.M. McSwain, where she attended Sunday school and sang in the choir faithfully. She accepted the Lord at the early age of 14 and received the Baptism of the Holy Ghost at the age of 16 at Emmanuel Temple FGPC under the leadership of Bishop A.A. Wells.
She attended Boise and Dunaway Elementary School and graduated in 1979 from Cleveland High School. She attended Portland Community College and the Apollo Institute where she received her medical certificate in Medical Administration.
She was employed while attending school at US Bancorp for a number of years. Genetta then relocated to New Orleans in 1992 where she served under the leadership of Bishop Henry at Dominion & Power Ministries. She joined in Holy Matrimony to Sidney White. While in New Orleans she worked for Direct Insurance as the Office Manager.
In 2002, Genetta relocated back to Portland with her family, and returned to Emmanuel Temple where she received her Ministerial License in June 2005. Utilizing her professional skills to assist her church, Genetta served as president of the Nurses and Emergency Response Team, both locally and nationally. Genetta was also a member of the Emmanuel Temple Choir and worked for Kaiser Hospital until her death.
She was preceded in death by her brother Earl.
She is survived by daughters Antoinette Ford, Keisha Grisby and Dominique Black; mother, Mary Williams-McSwain; brothers Michael Williams (Teresa), Orlando Williams (Nicole); sister, Genella Ware (Kaman); adopted sisters Bonita Moore (Terrance) and Melissa Woods; one granddaughter (whom she loved dearly) Alecea Harrison; and numerous aunts, uncles and a host of nieces, nephews and many, many friends.
A service will be held at 10 a.m. on Saturday, May 31 at Emmanuel Temple Church, 1033 N. Sumner.