A Day of Honor 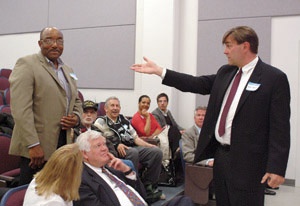 Lannis Warfield, the son of one of the men wrongfully convicted in the lynching of an Italian Prisoner of War in 1944 at Fort Lawton in Seattle is introduced by Jack Hamann, author of the book "On American Soil" at a National Day of Honor for wrongly charged and convicted Black soldiers on Sunday, May 25 at Fort Lawton.  Mr. Hamann, whose book was instrumental in getting the convictions of 28 wrongly convicted men overturned was the keynote speaker at the event which was sponsored by the National Association for Black Veterans. Sitting below Warfield is U.S. Rep. Jim McDermott.