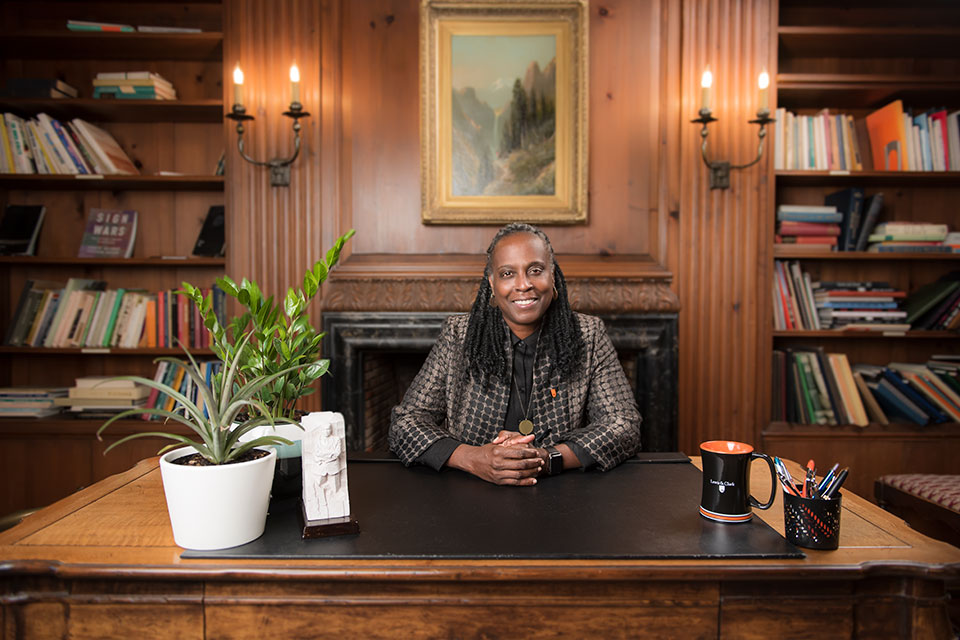 The Lewis & Clark Board of Trustees announced today it has selected  Robin Holmes-Sullivan, Ph.D., as the college’s 26th president. The appointment of Holmes-Sullivan follows a rigorous nationwide search that attracted a strong pool of over 100 applicants.

A respected higher education leader with three decades of experience at universities and colleges in Oregon and California, Holmes-Sullivan will assume the presidency in July, 2022, following the retirement of President Wim Wiewel. Holmes-Sullivan is currently the vice president for student life and dean of students at Lewis & Clark and has been credited for her pivotal role during the Covid pandemic of devising creative approaches that helped keep students safe and progressing toward their degrees.

"Robin rose immediately to the top of an impressive field of candidates," Lewis & Clark's Board of Trustees Chair Stephanie Fowler told Lewis & Clark faculty, staff and students this morning. "Through her management of campus crises large and small, Robin has proven herself to be a natural leader who knows how to bring people together to get things done, even in the most challenging circumstances.”

Holmes-Sullivan, who will be the first woman and the first person of color to serve as Lewis & Clark’s president in the college’s 155-year history, enjoyed “significant support” from the faculties of all three schools and was the favored candidate of all three academic deans and Wim Wiewel, Fowler said.

'They can dream big'

“In these tumultuous times, especially in regard to student issues, I can’t think of a more level-headed and experienced leader than Robin,” Wiewel said. “I look forward to working closely with her in the months ahead to make this a very smooth and successful transition.”

Expressing her gratitude to the board and the Lewis & Clark community for their faith in her, Holmes-Sullivan said being selected  president is the logical next step in a career dedicated to helping students realize their full potential.

Holmes-Sullivan also told the campus community she looks forward to working collaboratively with all of them, saying her own experience as a Black woman has shown her the importance of “having a diversity of voices at the table in order to influence and build a sense of inclusion, community and excellence.”

Holmes-Sullivan came to Lewis & Clark in 2019 from the University of California, where she served as vice president for student affairs overseeing the undergraduate admissions process and other student-related issues for the 10-campus, 200,000-student system. While at the University of California, Holmes-Sullivan co-led an effort to improve student affordability, helped develop a coherent sexual assault policy for all UC campuses, assisted in developing a new policy to streamline transfers to the university from the state’s community colleges and helped craft new policy around free speech and demonstrations.

While at UC, Holmes-Sullivan worked closely with UC President Janet Napolitano, former Governor of Arizona and Secretary of Homeland Security under President Barack Obama. Napolitano praised Holmes-Sullivan contributions to the UC system and called her “an excellent choice” to be the next president of Lewis & Clark.

“(Robin) possesses the leadership, vision and personal qualities that one wants in a college leader,” Napolitano said.

“I can’t think of a better selection.”

Holmes-Sullivan credits her father and mother, who worked their way up from entry level jobs to management positions as a marine and healthcare worker, with instilling in her a lifelong commitment to honesty, integrity, hard work and care and compassion for others. “Those values will continue to be my north star as your president,” she told Lewis & Clark community members.

Robin and her wife, Kathy, have two grown sons, a daughter-in-law and a grandchild.