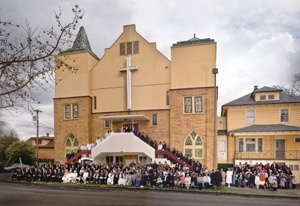 This week, as old-timers remember the destructive force of the Vanport flood 60 years ago, a few hundred others are reminiscing about how the flood helped create one of the most important institutions of Portland's Black community.
The Vancouver Avenue 1st Baptist Church, as an observance of its own anniversary in March of 2009, is publishing "Vancouver Avenue Yesterday, Today, Forever: Celebrating 65 Years of a Spiritual Landmark."
It's designed as an exquisite, full-color book depicting the history of its congregation, the families within it, and its church building.
The shiny, oversize volume will feature hundreds of photographs, as well as a pocket history of Oregon's African American heritage penned by The Skanner columnist Dick Bogle.
Orders are already being taken for those who wish to reserve their first-edition copies.
"The church will be celebrating its 65th anniversary, and to commemorate this huge milestone we decided to put together this family album," said Project Manager Raymond Burrell. "It includes our spiritual heritage as well as our personal heritage and our community heritage."
It was in the Vancouver, Washington, shipyard housing projects of World War II that the Rev. O.B. Williams and his wife Willa first gathered a handful of worshippers together, into a congregation then known as the First Baptist Church of Burton Homes.
It was a very young community made up of families  — predominantly from the South — who had come to the Northwest to build ships for the war effort.
Esdella S. Jackson and her husband Luther were the first couple ever joined in holy matrimony by Rev. O.B. Williams. Reading from Rev. Williams' account of the story of the congregation, Jackson pauses to stress what the little church meant to the displaced workers.
"Those were dark days because many people who came to the Northwest failed to keep their love of Christ," she says. "On VE Day (Victory in Europe Day) many workers were laid off; on VJ Day (Victory Over the Japanese Day) the plant and housing projects were closed – but Rev. Williams was able to keep a remnant of the church together."
In 1946, the congregation moved to Portland, settling in a temporary home in a Masonic Temple on North Russell Street.
From there, Jackson said, the group moved to a condemned rooming house on North Vancouver and Hancock, where the Portland Coliseum is today, and where they adopted their new name: The Vancouver Avenue First Baptist Church.
Then, on May 30, 1948, after weeks of warm, heavy rains, the dike system that protected Vanport City from the surging waters of the Columbia River failed, killing a reported 13 people and leaving nearly 17,000 homeless.
Black workers who lost their homes in the flood eventually left Oregon in droves because of the acute shortage of housing and racist restrictions on where they were allowed to buy or rent homes.
But those with roots in the area moved in mass to the Albina neighborhood.
"When the flood happened it forced a whole community to move inwards," Burrell says. "That was when the church population exploded." 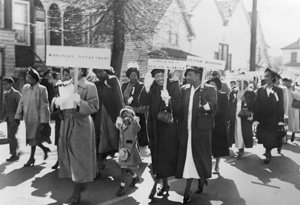 In 1949, when the congregation grew too big for their Hancock location, the community found the resources to purchase their current church building at 3138 North Vancouver Avenue, which was formerly the Central Methodist Church.
On Palm Sunday of 1951, the congregation marked its historic move to the new church with a ceremonial walk from the old location to the new one – hundreds of people strong, dressed in church raiment and their Sunday best.
The event stopped traffic and made it onto the cover of The Oregonian.
In the years since then, the community has played a major role in Portland as the largest Black congregation in the city.
Within five years, the congregation expanded the old clapboard structure built in the 1880s for about 600 people, into an expansive brick structure boasting 18 classrooms to fit a thousand worshippers as well as a growing slate of community projects and a renowned choir.
The church has weathered many changes, including the massive demolition of the Albina business district in the late 1950s, which cut a swath of destruction right to their own doorstep – wiping out almost as many buildings as the Vanport flood.
In 1961, the Vancouver Avenue Baptist Church hosted the Rev. Martin Luther King, Jr., who traveled to Portland as part of his historic civil rights campaign.
Over the years, Rev. Williams presided over hundreds of weddings, and consecrated the births – and deaths – of thousands of Portlanders.
It's all in the book, Burrell says, which chronicles the lives of 65 families within the congregation.
"One of the things about the African American community is, we don't usually write our history down," Burrell says. "The beauty of this book is we took painstaking care to write the stories to be passed down."
As a church member for the past 15 years, Glenda D. Young is considered a "newcomer." "Because of the size of this church, and its longevity, most people in Portland have some tie to it," she says.
Some of the original founding members still attend services today, including Mrs. Jackson, and Thelma M. Sylvester, who joined around the time of the Vanport flood with her husband, John.
"It has been a lot of change," she said. "And this is the way it's supposed to be."
In all the generations of the Vancouver Avenue congregation, there have only been two spiritual leaders that have had the visionary spirit to guide the church movement forward: the Rev. O.B. Williams and the Rev. Matt Hennessee.
This weekend Hennessee celebrates his third year in the position.
His community points to Hennessee's youth and energy as being a core quality they feel is part of the history of Vancouver Avenue's community – born, as they were, from the young shipyard workers during a time of world war.
"Time does bring about change, and you see faddy things that come and go – but in 15 years, I've seen a bridge between the old and new," Young says. "God stays the same, and you may have to present him differently, but God stays the same."