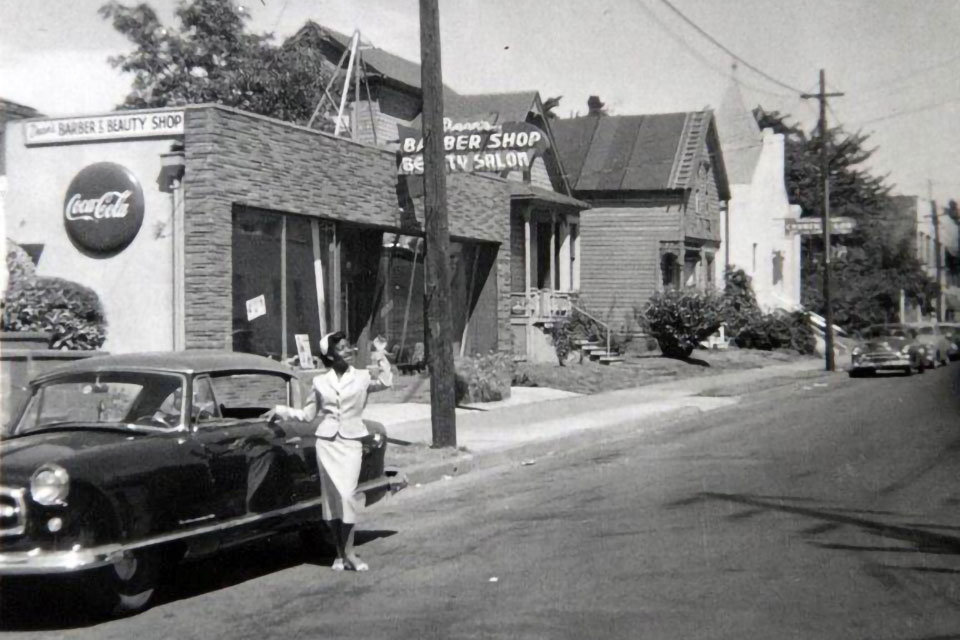 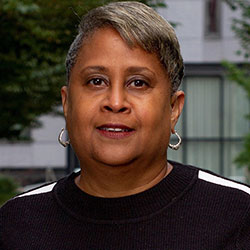 “These landmarks are all important to understanding our history and demonstrate the resilience  of Portland’s Black community despite systemic racism and government-sponsored clearance, redevelopment, disinvestment, and gentrification,” Blumenauer, who serves as co-chair of the Congressional Historic Preservation Caucus, wrote in a letter to Secretary of the Interior Deb Haaland.

Blumenauer thanked Kimberly Moreland of the Portland Historic Landmarks Commission and vice president of Oregon Black Pioneers by name for her work on a small team that prepared the nominations.

“This is my first time going through the process,” Moreland told The Skanner. “I didn’t realize that the process included the support from Rep. Blumenauer – I just thought that was pretty amazing.”

“Dean’s Beauty Salon and Barber Shop represents the migration of African Americans from the south to the west,” Moreland told The Skanner.

Benjamin Dean moved to Portland from Birmingham, Ala. in 1942, looking for better job prospects and an opportunity to escape the racism of the Jim Crow south, according to local historians who submitted Dean’s for inclusion on the National Register. Dean had seen a posting for work in defense production, and landed a job as a welder at the Kaiser Shipyard. His wife Mary Rose followed with their three children soon after, and the family settled in Vancouver, Wa. Mary Rose, a graduate of the Madam C.J. Walker School of Beauty, opened a salon in the family home.

When the shipyards closed, the family bought a house in the Eliot neighborhood and after working menial jobs, Benjamin enrolled in barbering school. A job at the Ideal Barber Shop in Lower Albina allowed Benjamin to expand his skills from cutting only Caucasian hair, and he and Mary Rose decided to open what would become a joint venture. After struggling to find a fair loan from white-owned institutions, the couple was granted a loan by a Jewish loan officer. Benjamin worked with local architect Jack P. Stuhl to design the building on Northeast Hancock Street, and the business opened in 1956.

“It’s an interesting building, because it has two entrances: one for the barber shop and one for the women’s salon, which was built for his wife,” Moreland said. “Benjamin later went and got a license to open a barber shop.”

Kim Brown, the Deans' granddaughter, took over the shop in 1987, and her niece Nicole Rose produces the Ella Dean line of hair oils in honor of her family.

"And the building is right in the center of lower Albina, which was once a thriving Black community, and a lot has happened – whether it was highway construction, or the Memorial Coliseum displaced many of the clientele, or the rapid gentrification of WIlliams Avenue – so it has withstood the times.

And if you go down to Dean’s, you can see how that little one-story building is kind of nestled between these huge developments. In fact, the sign really adds to the historic picture of the building, and hopefully they’ll be able to request funding to restore the sign – another benefit of being listed on the National Registry.” 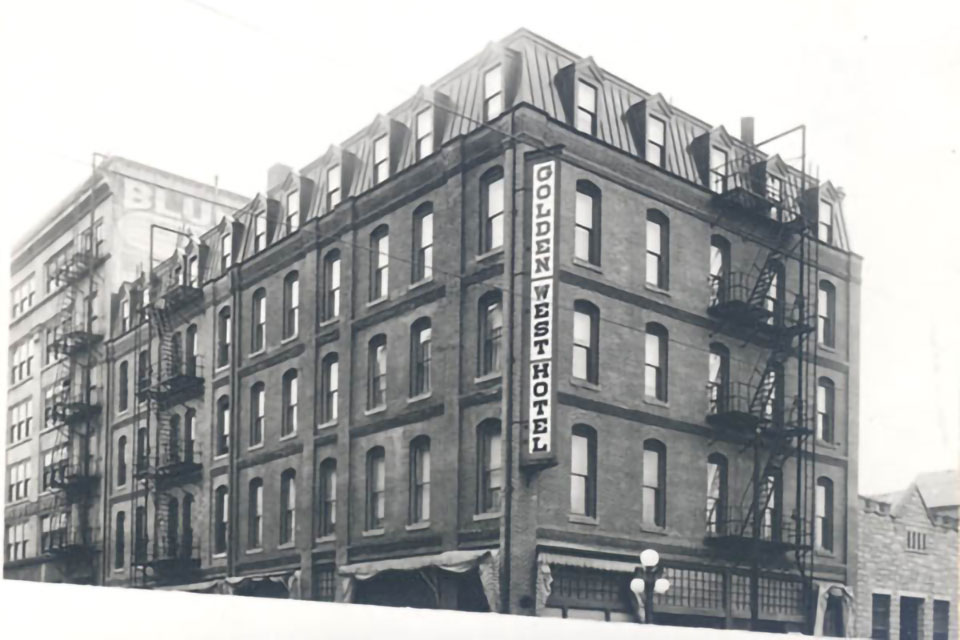 “The Golden West has a significance that would overshadow Mt. Olivet Baptist Church and Dean’s Barbershop,” Michael Grice of the World Arts Foundation and Friends of Golden West told The Skanner, “just because it was the second-largest hotel that accommodated African Americans in the U.S., second only to the Hotel Theresa in New York.”

How did the largest such establishment on the west coast come to be based in Oregon?

“Portland was a railroad terminal, and if you know the history of African Americans in the U.S., they were denied employment opportunities up and down the line except at the railroad, even if they had a college degree – and many did,” Grice said.

But railways, infamously unfriendly to labor, did not provide accommodation to their workers. Black porters on the three-day run from Kansas City to Portland landed in an inhospitable city, and were forced to sleep in awful conditions onboard the trains where they worked.

"because they were not given a dormitory car where they could sleep at night,” Grice said. “They kept blankets and pillows in the ‘possum belly,’ the storage space beneath the floor in the dining car.”

That would later change after labor and civil rights activist A. Philip Randolph, who would later stay at the Golden West, founded the Brotherhood of Sleeping Car Porters, the first prominent African American-led labor union. But another railway man, William Duncan Allen, saw an opportunity to settle in a city that had a major hospitality gap.

The building itself was completed in 1892, but did not house any successful ventures until he stepped in as proprietor in 1906 and the hotel began welcoming Black guests.

“It was five stories, it had an elevator, it had a top-notch restaurant, barber shop, and in the basement was the second-largest gambling hall on the west coast, second only to Barbary Coast in San Francisco,” Grice said.

Allen was said to have run a reputable hotel until 1930, when another major displacement of the Black community, in concert with the Great Depression, marked the end of the Golden West as a hotel.

Central City Concern now owns the building. In the 1980s, Grice and his friend and colleague Bob Zybach successfully petitioned the nonprofit to change the name of the building back to Golden West.

“It’s really connected to the conclusion of the transcontinental railroad and employment opportunities for African Americans, when the Union Station was opened,” Moreland said of the site. “It’s intimately tied to that whole era of the railroad industry and providing housing and entertainment, and it became the nucleus of the Black community as the porters brought their families to Portland. It became a gathering place for African American families, and they had a soda shop, barber shop, and affordable housing for some of the more transient men without families.”

(An oral history interview with Allen's daughter, Constance Beaty, can be found here)

The city's earliest Black Christian congregations were based near Union Station. Though local historians estimate Mt. Olivet was founded around 1900, services were conducted in private homes until 1907, when the church built its first house of worship at 311 Northwest Broadway. But the displacement of the city’s Black residents began soon after, and the congregation moved east of the Willamette to Lower Albina – along with all the other Black congregations that had once been located close to the railroad hub.

Moreland noted that when the church was constructed in the early 1920s, it was amid opposition from neighbors, many of whom pushed to have the church’s building permit denied. Regardless, the church was built to hold a congregation of 500, and to hold church and community gatherings with a kitchen and large meeting facilities. Mt. Olivet was able to narrowly avoid foreclosure during the Great Depression, and saw its congregation grow quickly in the 1940s as thousands of African Americans came to the area to work on defense production for the U.S. Maritime Commission.

“Over the years, since its inception, national figures came to the church,” Moreland said. “(Activist) Marcus Garvey, Illinois representative Oscar Stanton De Priest,” a Republican and the first Black congressman to be elected that century, A. Philip Randolph, labor activist and founder of the Brotherhood of Sleeping Car Porters, among others. The church maintained a close association with the NAACP Portland chapter, often hosting meetings and stirring addresses from NAACP leaders.

“There have been amazing legacies outside of the church, but even within the church you have outstanding preachers and ministers who were well known for their oratorical skills,” Moreland said.