The Skanner Foundation Drum Major for Justice 2022 is Teressa Raiford 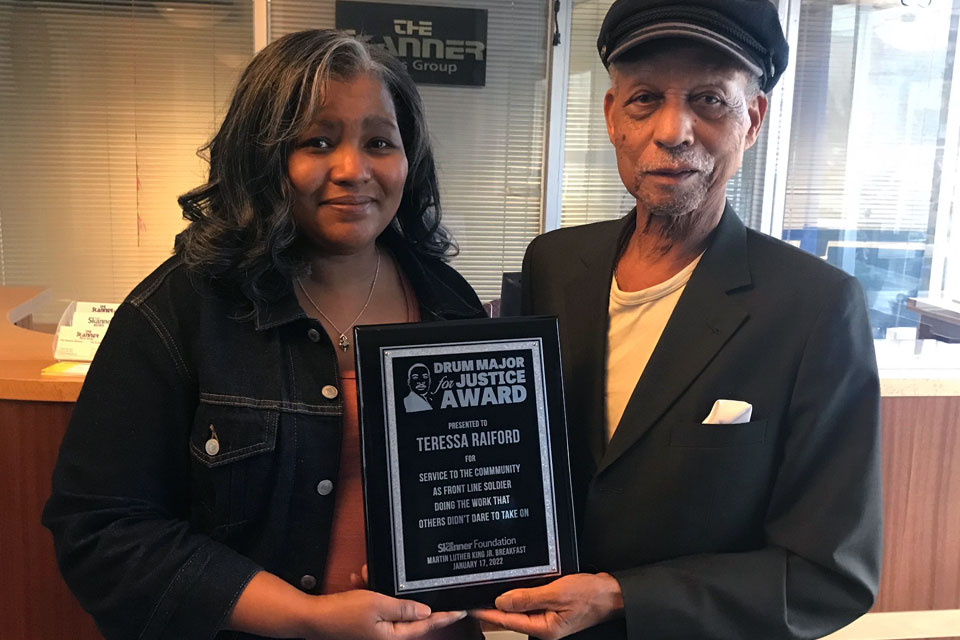 This year The Skanner Foundation will present the Drum Major for Justice award to a local activist who has worked ceaselessly for more than 20 years to advance peace, justice and human rights in Portland, Oregon.

Through political campaigns, legal actions, grassroots organizing and her fearless determination to speak up against racial injustice, Portland-born Ms Raiford has made a lasting impression on our city and our state.

Since founding Don't Shoot Portland she has inspired countless young people, not just to show up for demonstrations to proclaim that Black Lives Matter but to do so in a constructive way that reduces violence and builds community resilience.

"I am very grateful for this honor. It means a lot to me for my community to recognize my work over the years," she told The Skanner.

"I’m encouraged now by the people who are picking up the fight for racial justice and for our children and grandchildren to grow up with opportunities and without the fear of violence."

Raiford's awareness of racism began at an early age. Her family owned the Burger Barn, a restaurant where police officers left dead possums in 1981, sparking anti-racism protests. As a young woman, Raiford struggled financially and personally, experiencing violence both in her home and in her neighborhood. Determined to give her children a better life, in 1996 she bought a car and drove to Texas.

"I wanted my kids to have a normal family life," she says. In Texas, I wasn’t looked at as a Black person but as a person with a family who needed a job.

"In Portland they wouldn’t even let me clean toilets."

Texas offered work opportunities and greater personal success but Raiford missed her family and returned to Portland in 2010. Just a month later her world was turned upside down by the shooting death of her 19-year-old nephew Andre Payton.

"It was unbelievable, ridiculous, devastating," she says. "He was such a happy baby and lovable boy."

Raiford recognized that Black families in Portland were dealing with challenges rooted in  racial inequity and saw this was affecting the life chances of young people like her nephew.

"There were no opportunities for these children, no investment to meet their needs and what did exist was only addressing the crisis of gangs and violence. Trauma and the lack of basic food, housing and health security was not being addressed and the result was that poverty was being criminalized. Peace requires an investment."

Raiford began working with families under pressure, helping them advocate for themselves in meetings with schools, welfare agencies and the foster care system.

Persistent and determined, Raiford went to numerous meetings, pushing city and country officials to do more to combat youth violence. To build support, she created a Facebook group, 40 Days Seeking Common Unity, that lasted much longer than 40 days and still continues as a hub for promoting community events, discussing gun safety measures and advocating for Black youth and families through grassroots groups, such as Grandmothers raising grandchildren.

Recognizing that real change would need political leadership, Raiford ran for Portland City Commissioner in 2012. Without money for ads or a large organization behind her, Raiford never came close to winning the seat, but she had brought a wider audience to the issues she cared about and was not discouraged.

Through her connection to the nonprofit Everytown for Gun Safety, in 2013 Raiford was part of a delegation of family members who had lost loved ones to gun violence who visited the White House and met then First Lady Michele Obama.

“Michelle Obama spent time with each family individually,” Raiford said of the meeting. “She did not rush us even though it was right before the State of the Union address. She let everyone speak for as long as they wanted.”

Raiford ran for political office again in 2014, targeting Loretta Smith's seat on Multnomah County Commission, but coming in third behind Smith and Bruce Broussard. That same year she started the advocacy group Don't Shoot Portland, to push for police accountability.

"I realized people were bringing guns into our community and distributing them," she says. "They didn't know or care if the guns went to people who would shoot themselves, or even if the buyers were in sane mind.

"Young people just felt someone is going to kill us, either the police or someone else.

"But they had no gun education and they didn't realize how dangerous it is to carry a firearm. My nephew had a gun when he died. So we were all outraged at the death of Trayvon Martin but at the same time we were seeing gun deaths in our own community."

Raiford's determination to elevate Black voices has sometimes put her own wellbeing at risk. In 2015 she was arrested and charged while protesting the police shooting of another Black teenager, Michael Brown. A jury acquitted her and Raiford sued Portland Police for damages.

She also announced a write-in campaign for Multnomah County Sheriff against former Police Chief Mike Reese. Reese won the election and a judge eventually dismissed Raiford's lawsuit, but her efforts kept police accountability in the spotlight.

In 2017 Raiford announced her fourth run for office, this time taking on Ted Wheeler in the race for Portland mayor. Her shoestring campaign never raked in the substantial campaign cash necessary to buy ads, gain name recognition and win political office. Yet her supporters grew in number and she took third place in the May 2020 primary with her highest ever share of the vote.

Then, when the murder of George Floyd sparked protests across the country thousands of Portlanders turned out to Black Lives Matter demonstrations even as the response from law enforcement became increasingly violent.

Don't Shoot Portland filed a class action lawsuit against the Portland Police for using tear gas against protesters and won a temporary injunction that made the City of Portland reassess its approach. In March 2021 U.S. District Court Chief Judge Marco Hernandez issued a seven page ruling sanctioning the city and requiring Portland Police Bureau to train officers in crowd control.

“I feel like this is a win for all of us,” Raiford said of the judgment. “No one should be harmed by law enforcement during Black Lives Matter demonstrations.”

Don't Shoot Portland had also filed a civil lawsuit against the federal government for violating procedural laws and protestors’ constitutional rights. That case was resolved without further litigation in November 2021.

For most of her years as an activist, Teressa Raiford has worked for change without a solid income or a well-funded organization behind her. Yet through sheer grit and determination and hr passion for justice she has influenced our city and a new generation of activists.

"I'm encouraged now by the people who are running for office," she says.

"I hope that putting myself out there may have opened doors for them. We need more people with lived experience of the challenges facing our communities running for office and I will be happy to be more of a mentor and supporter. For now I am just very grateful to be here. My grandchildren are my treasure and my family is my blessing."