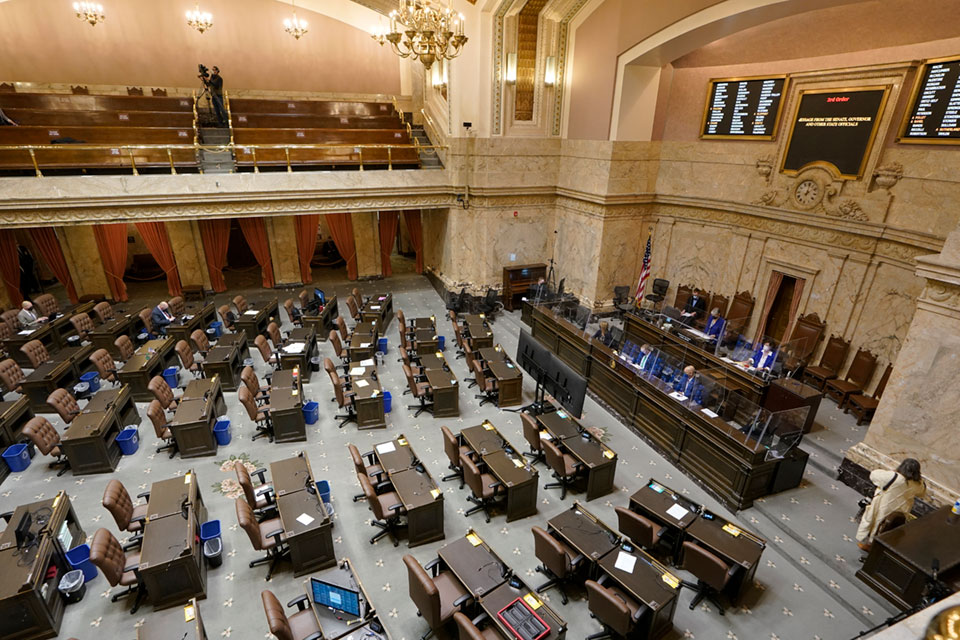 OLYMPIA, Wash. (AP) — Lawmakers in Washington state have started a new legislative session amid the backdrop of the ongoing COVID-19 pandemic, and much of their work will be done remotely as leaders try to limit the possibility of exposure.

Since Friday, four Democratic senators — Senate Majority Leader Andy Billig and Sens. John Lovick, Mark Mullet and Yasmin Trudeau — have tested positive for the coronavirus. Billig said he had no symptoms and Lovick described his symptoms as mild. Mullet — who said he didn't have any symptoms — tested positive Monday after a test at the Capitol, and said he would work remotely the rest of the week. Billig, All four were fully vaccinated and Billig, Lovick and Mullet also received a booster. Trudeau had been set to receive her booster next week.

Last month's death of Republican Sen. Doug Ericksen following his bout with COVID-19 was noted during remarks in both chambers, and Democratic Lt. Gov. Denny Heck, who serves as the president of the Senate — said “Our hearts are heavy with his passing.”

When the session officially convened at noon Monday, just four lawmakers were present in the House — Speaker Laurie Jinkins, newly sworn in Democratic Rep. Dan Bronoske, and Republican Reps. Drew MacEwen and Paul Harris — and 15 were present in the Senate. Credentialed press were seated in the public galleries overseeing the chamber floors.

In the House, regular testing will be required and only lawmakers who have provided verification of their vaccination — including a booster — will be among the limited number of legislators allowed on the floor. In the Senate, lawmakers present will be allowed regardless of vaccination status, but must provide a same-day negative test.

House and Senate leaders said they will re-evaluate their plans every two weeks, and changes could occur depending on the state of the pandemic.

Much of this first week will be focused on committee hearings, which will are being conducted remotely, with public participation. As before the pandemic, hearings and floor votes will continue to be broadcast or live streamed by TVW, the state’s government affairs channel.

“Our time together this session is short and the list of what we all hope to accomplish is long,” Jinkins said in her opening remarks Monday. “It will take all 98 of us in this chamber listening to each other, and working together, to tackle the challenges our state faces, whether it’s the economy, housing, transportation, health care, racial equity or climate change.” 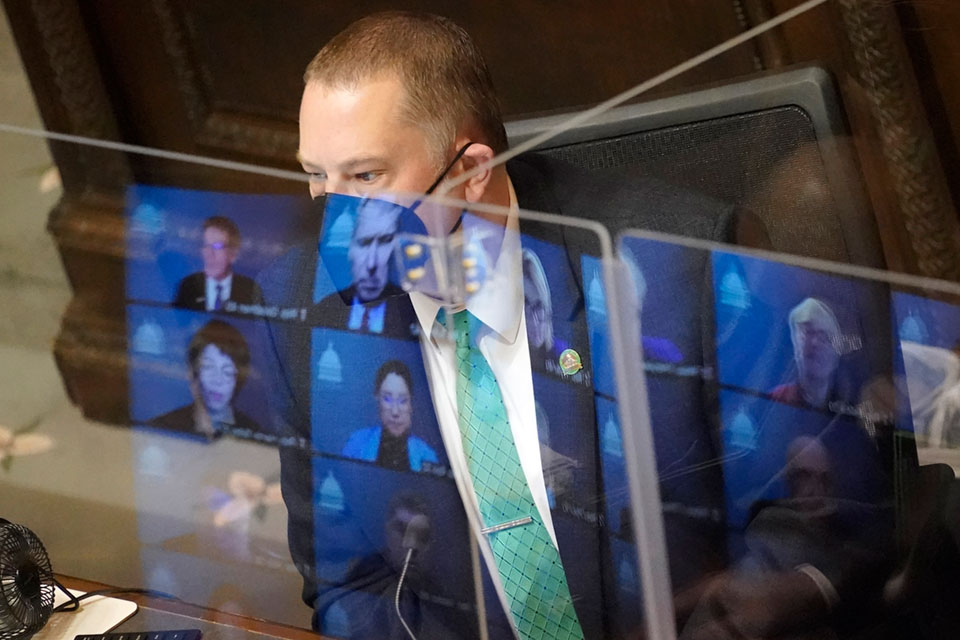 Gary Holt, who reads bills being considered in the Washington House, wears a face mask as he sits behind a plexiglass shield with reflections of state representatives meeting remotely on it on the floor of the Washington state House, Monday, Jan. 10, 2022, at the Capitol in Olympia, Wash. Lawmakers started the new legislative session Monday during the ongoing COVID-19 pandemic, and much of their work will be done remotely as leaders try to limit the possibility of exposure. (AP Photo/Ted S. Warren)

The main focus of the session is for lawmakers to craft a supplemental two-year state budget plan. Gov. Jay Inslee — who will give his State of the State speech on Tuesday — released a nearly $62 billion plan last month, and the House and Senate will release their own proposals in the coming weeks.

That budget will likely include more than $1 billion in federal coronavirus relief money, with Inslee and Democratic leaders wanting to use that one-time money — in addition to state funds — to help in areas like food assistance programs, boosting acute care hospital capacity and offering more mental health and social supports for K-12 students who have struggled during the pandemic. Inslee has also proposed spending nearly $300 million on containing the ongoing pandemic, on things like diagnostic testing, contact tracing, outbreak response and expanding access to vaccines.

But lawmakers will also take up a host of other issues, including potential changes to the state's new long-term care program — paid for with an employee payroll tax — after criticism was leveled related to opt-out options for the program, along with those who pay into the program but may never benefit. One bill introduced would delay the tax until July 1, 2023 and would refund any premiums that were collected before that date.

Policies on homelessness and housing will also be addressed, as will proposals to reduce carbon emissions in the state. Lawmakers also plan to make changes to some measures that were passed as part of a broad police reform package last year. Democrats say overall the bills are working, but have acknowledged that restrictions on using force have hobbled officers in certain situations, such as responding to mental health crises, and this session they intend to make clear that police can use force to assist in those cases.

They also plan to loosen use-of-force restrictions in cases where police are investigating violent crime, and they say they are open to considering a Republican proposal that would lessen restrictions on vehicular pursuits.

House Republican Leader J.T. Wilcox, in remarks made to the chamber via remote video stream, encouraged the majority to listen to ideas from his caucus on various issues ranging from the environment to housing and said he wanted to to challenge members of both caucuses to not, “fall into group think.”