COVID Case Counts May Be Losing Importance Amid Omicron 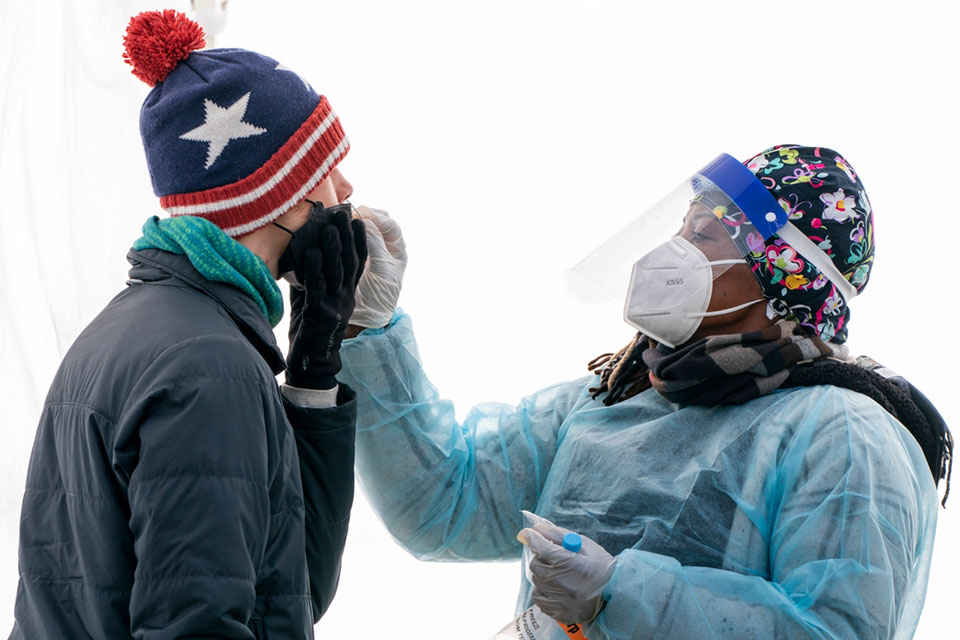 The explosive increase in U.S. coronavirus case counts is raising alarm, but some experts believe the focus should instead be on COVID-19 hospital admissions. And those aren’t climbing as fast.

Dr. Anthony Fauci, for one, said Sunday on ABC that with many infections causing few or no symptoms, "it is much more relevant to focus on the hospitalizations as opposed to the total number of cases." Other experts argue that case counts still have value.

As the super-contagious omicron variant rages across the U.S., new COVID-19 cases per day have more than tripled over the past two weeks, reaching a record-shattering average of 480,000. Schools, hospitals and airlines are struggling as infected workers go into isolation.

Meanwhile, hospital admissions averaged 12,700 per day last week, up 46% from the previous week, but well short of the peak of 16,500 per day a year ago, when the vast majority of the U.S. was unvaccinated. Deaths have been stable over the past two weeks at an average of about 1,200 per day, well below the all-time high of 3,400 last January.

Public health experts suspect that those numbers, taken together, reflect the vaccine’s continued effectiveness at preventing serious illness, even against omicron, as well as the possibility that the variant does not make most people as sick as earlier versions.

Omicron accounted for 95% of new coronavirus infections in the U.S. last week, the Centers for Disease Control and Prevention reported Tuesday, in another indication of how astonishingly fast the variant has spread since it was first detected in South Africa in late November.

Dr. Wafaa El-Sadr, director of ICAP, a global health center at Columbia University, said the case count does not appear to be the most important number now.

What should be our focus?

The U.S. at this stage of the pandemic should be “shifting our focus, especially in an era of vaccination, to really focus on preventing illness, disability and death, and therefore counting those.”

Daily case counts and their ups and downs have been one of the most closely watched barometers during the outbreak and have been a reliable early warning sign of severe disease and death in previous coronavirus waves.

But they have long been considered an imperfect measure, in part because they consist of laboratory-confirmed cases of COVID-19, not the actual number of infections out there, which is almost certainly many times higher.

The daily case counts are also subject to wild swings. The number of new cases recorded on Monday topped 1 million, a figure that may reflect a backlog held up by reporting delays over the holiday weekend. The seven-day rolling average is considered more reliable.

Now, the value of the daily case count is being called into question as never before. 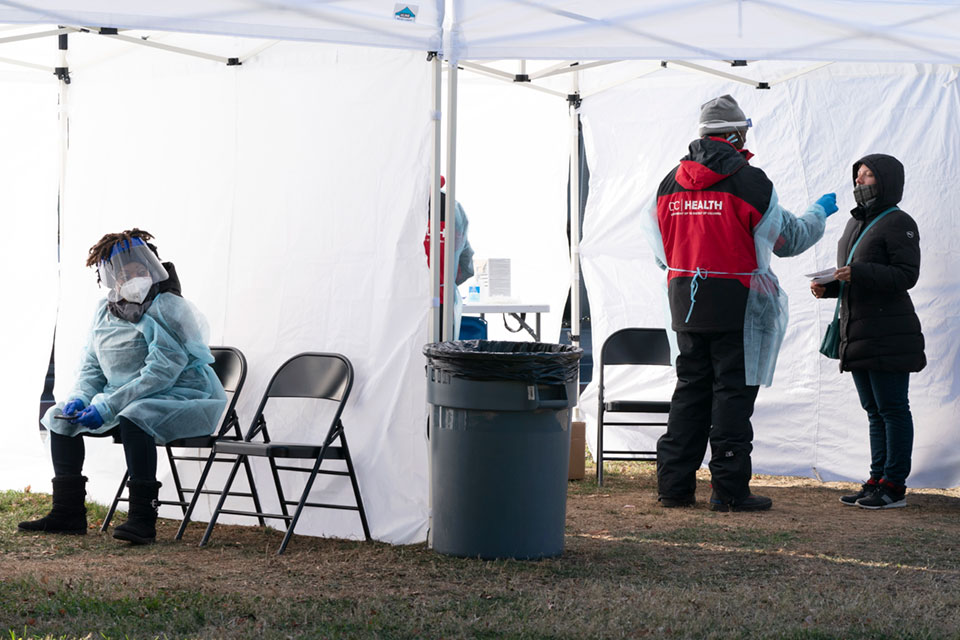 FILE - A worker, left, rests for a second between patients, as another person, right, is tested for COVID-19 at a walk-up testing site at Farragut Square, Dec. 23, 2021, just blocks from the White House in Washington. The explosive increase in U.S. coronavirus case counts is raising alarm, but some experts believe the focus should instead be on COVID-19 hospital admissions. And those aren't climbing as fast. (AP Photo/Jacquelyn Martin, File)

For one thing, the skyrocketing increase reflects, at least in part, an omicron-induced stampede among many Americans to get tested before holiday gatherings, and new testing requirements at workplaces and at restaurants, theaters and other sites.

Also, the true number of infections is probably much higher than the case count because the results of the at-home tests that Americans are rushing to use are not added to the official tally, and because long waits have discouraged some people from lining up to get swabbed.

But also, case numbers seem to yield a less useful picture of the pandemic amid the spread of omicron, which is causing lots of infections but so far does not appear to be as severe in its effects.

“Hospitalizations are where the rubber meets the road,” Noymer said. “It’s a more objective measure,” although not perfect. He added: "If I had to choose one metric, I would choose the hospitalization data.”

Keeping track of COVID-19 admissions can tell doctors something about the seriousness of the virus and also the capacity of hospitals to deal with the crisis. That, in turn, can help health leaders determine where to shift equipment and other resources.

Still, health experts are not prepared to do away with case counts.

“We should not abandon looking at case numbers," said Dr. Eric Topol, head of the Scripps Research Translational Institute, "but it is important to acknowledge we’re seeing only a portion of actual number of cases.”

Ali Mokdad, a professor of health metrics sciences at the University of Washington in Seattle, said that for each new infection detected, the U.S. is missing two cases. But he said tracking the number of positive test results is still important as omicron makes its way across the land.

Case numbers can point to future hot spots and indicate whether a wave of infection has peaked, Mokdad said. 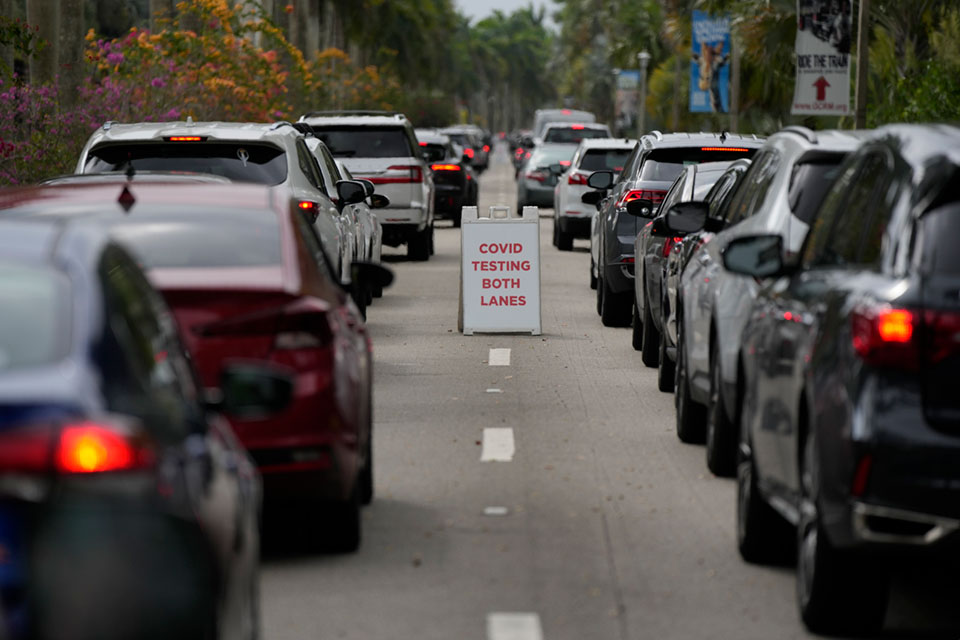 FILE - People wait in line in their cars to be tested for COVID-19 at a drive-thru testing site at Zoo Miami, Monday, Jan. 3, 2022, in Miami. The explosive increase in U.S. coronavirus case counts is raising alarm, but some experts believe the focus should instead be on COVID-19 hospital admissions. And those aren't climbing as fast. (AP Photo/Rebecca Blackwell)

Also, case counts will continue to be important to people who are vulnerable because of age or health reasons and need a sense of the virus' spread in their communities so they can make decisions about precautions, he said. Hospitals, schools and businesses need to plan for absences.

“To give up on knowing if cases are going up or down, it’s flying blind. How can we as a country not know the epidemic curve for infection?” Mokdad said.

If testing has lost its relevance, he said, it is because the U.S. never developed a way to consistently and reliably monitor infections.

“It’s not acceptable to cover failure by changing the rules," he said.