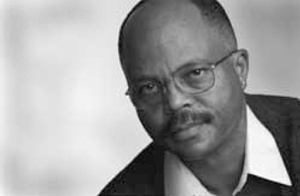 John Head, author of "Standing in the Shadows: Black Men and Depression"

Gayathri Ramprasad has a Master of Business Administration, a family history of mental illness, and a mission to help communities of color find treatment and healing for depression and other mental health problems.
"They are disorders of the brain and can be treated," she says.
Every year, Ramprasad's nonprofit organization, ASHA International, sponsors a series of events called Culture Counts, targeting different ethnic communities for mental health education and at the same time offering cultural competency training opportunities for professional caregivers in the field.
This year, ASHA presents author John Head, Standing in the Shadows: Black Men and Depression, who is speaking at four events around the city on May 30 and 31.
"Nineteen years ago I was locked up in an isolation cell twice, and lost a baby in between" Ramprasad said. "I promised God that for every moment I spent locked up, I would bring hope to others like myself and my family."
ASHA is the Sanskrit word for "hope." Ramprasad – a native of India – says her goal is to educate families, communities, church congregations and hospital workers on the positive potential that culture can have in mental health treatment – as well as the damaging aspects of stigmatizing the mentally ill within communities of color.
More than anything, Ramprasad says, it's important for friends and families to seek out treatment – and more than ever, recovery is possible.
Within her own family, Ramprasad says her sister and brother have been diagnosed with pschyzo-affected disorder, and her father suffered from extreme depression – but it was considered such a shameful secret that she didn't find out until she herself became ill.
"I had the opportunity to learn firsthand the power that culture has in underlying treatment and recovery," she says.
"We know for a fact that mental illness is an equal opportunity disease, but treatment is not an equal opportunity outcome."
In addition to writing his memoir of chronic depression and recovery, Head is a former reporter for the Detroit Free Press and USA Today, a member of the board of directors of the American Psychiatric Foundation and is currently the chairman of the board of the Penn Center.
On Friday, May 30, he speaks at Jefferson High School from 9:15 to 10 a.m., then to health care providers at Oregon Health and Sciences University from noon to 1 p.m. That evening he appears at the Talking Drum Bookstore from 6 to 8 p.m. On Saturday, May 31, he is at the Highland Christian Center from 11 to 1 p.m.
"It is the same presentation in all these places, but with a different learning objective," Ramprasad says. "Whether you are African American, Indian or Egyptian, it doesn't matter — your culture can either be empowering or entrapping."
Find out more on the Web at www.myasha.org.