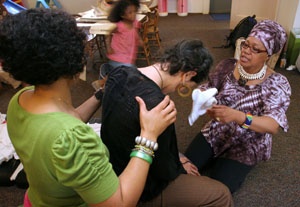 The International Center for Traditional childbearing last week kicked off a new round of training for young women planning careers in the area of pregnancy support, family education and infant mortality prevention.
In a word, each woman hopes to become a doula.
"They offer pregnancy and birth support for the mother and the husband, with pre-natal care and post-partum too," said ICTC founder and director Shafia Monroe. "They're really making that village concept and improving birth outcomes."
The Center recently won a grant from the Kellogg Foundation to provide doula training for free to local women of color – although last week women traveled from all over the West coast to participate in a 22.5-hour-long series of workshops in the field.
The ICTC's doula training combines health education and interpersonal communication with a little bit of business skill. "You do it from the heart, but you do have to make money," said ICTC trainer Kamania Wilson.
Although it's an ancient art, the idea of reviving the practice is still just catching on within hospitals.
After attaining the ICTC doula training, each woman then must attend a prescribed number of births before earning a private certification.
"Our training is a good starting point for other professions – midwifery, nursing, public health," Monroe said.
"Of all the schools I've looked into, this is the closest to the kind of relationship with the family and mother I want to have," said Bleu Wilding. "There's diversity, there's spirituality, and a multi-cultural approach."
The Center's training focuses not only on birthing traditions from around the world – reaching for cultural competency for families of color – but also alternative diets such as veganism, vegetarianism, and other food preferences that can affect mothers and babies.
Although she's still a student, Portlander Aminah Jones has been hired by an Ethiopian family to attend their mother during her upcoming hospital birth at Emanuel Hospital.
"They just want me to be there to support her because she's having short-term memory loss," she said. "They called us and knew they could get a multi-racial, culturally-competent woman to help them when they needed it."
Monroe says the doula training program is transformational for the women enrolled in it as well as local families who stand to benefit from its services.
Studies show that families with the support of a doula have better pre-natal care and better births, including fewer complications, shorter labors and fewer Cesarean sections.
"There are people out here who are willing to help families bring out their joy," she said. "It's so important that I personally will find a way for any woman to attend the doula training – we want any woman who wants to come here to be free to do so."
To find out more about the ICTC, call 503-460-9324, or www.blackmidwives.com.