Brian Stimson of The Skanner
Published: 14 May 2008 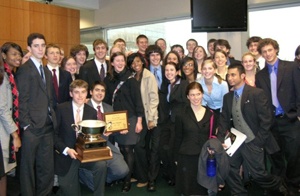 For the last year, Danielle Tucker spent nearly 18 hours a week studying for one class. But she wasn't alone. Thirty-five other students also joined the Constitution Team for what some could consider an extreme academic endurance competition.
And for the second year in a row, Grant High School – with one of the most diverse teams in its history — placed third in the nation at the "We the People" competition in Washington, D.C. on May 5.
At Grant High School, the Constitution Team is a highly competitive class. According to instructor, Geoffrey Henderson, 96 kids tried out for the 36 slots. The students are selected after submitting an essay and undergoing an oral interview. Then comes the training for the competition — students are broken up into six units of study – ranging from the foundations of the constitution to the bill of rights to case law and spend the rest of the year studying.
When Jack MacNichol was handed two four-inch binders of material on constitutional law and told he would read every word, he was in disbelief.
"People tell you and you don't believe them. You don't think they're serious," he said about the intensity of the learning. "No one spends 20 hours a week doing anything."
But MacNichol, as well as his other classmates, soon realized it was no joke. The disparate group of students, which included Grant Rose Festival Princess Taylor Allen – many of whom who had never worked together in a group – soon realized they would know more about the constitution than most college graduates.
This is the second year Henderson has taught the class, and he's the first to admit he was no expert on the subject.
"My class is only 18 weeks," he said. "There's no way a teacher can provide the quality that individual coaches can."
That's where the 11 coaches come in. A volunteer group comprised of lawyers, judges and constitutional law experts, many of Henderson's coaches have been working with Grant's Constitution Team for the past seven years.
If the coaches had actually charged billable hours to the school for all the time they spent with the students, Henderson calculated it would be costing the school about a $1 million a year. And that's exactly what some schools across the nation do. One of the schools that placed ahead of Grant in the national competition paid their coaches. The other was a private magnet school.
The competition consists of a panel of judges presenting a series of questions to students, to which they must defend their position. Henderson said several judges said Grant's team was by far the best. But like other subjective competitions, other judges' perceptions also matter.
Henderson also brings in other outside experts on the constitution and politics, including Oregonian columnists David Reinhard and David Sarasohn, Oregon state Supreme Court justices and others.
But possibly the most outstanding part of this year's team was its cultural diversity. In years past, the Constitution Team didn't match the school's racial makeup. This year, a concerted effort was made to get students of color to sign up for the class. Henderson says he wanted to avoid the trap of creating an exclusive "elite" team where minorities didn't feel welcome.
Henderson, an African American, grew up in a middle class White neighborhood. He attended Oregon State at a time in which he was one of only about 5 other African Americans – out of a student population of about 13,000.
"I know what that isolation feels like," he said.
Henderson said its important to have a diverse group in the team, where everyone can interact, but also, where minorities have other minorities to interact with, to relate to.
For Tucker, who said she signed up for the team on a whim, joining the team was about being a role model.
"I never saw an African American girl on the team," she said. "Maybe people behind me will think 'I can do it too.'"
Along with cultural diversity, which Tucker and MacNichol said helped all the teammates get a better perspective, political diversity was also a key asset, if not a bit hard to find at a liberal haven like Grant.
Thomas Scharff said while it was hard to argue a political viewpoint to which he was diametrically opposed, it helped with the competition. Tucker said she even had to defend the Bush Administration's policy surrounding the prisoners at Guantanamo Bay, a policy she opposes.
"Having those different perspectives improves your unit," Scharff said.