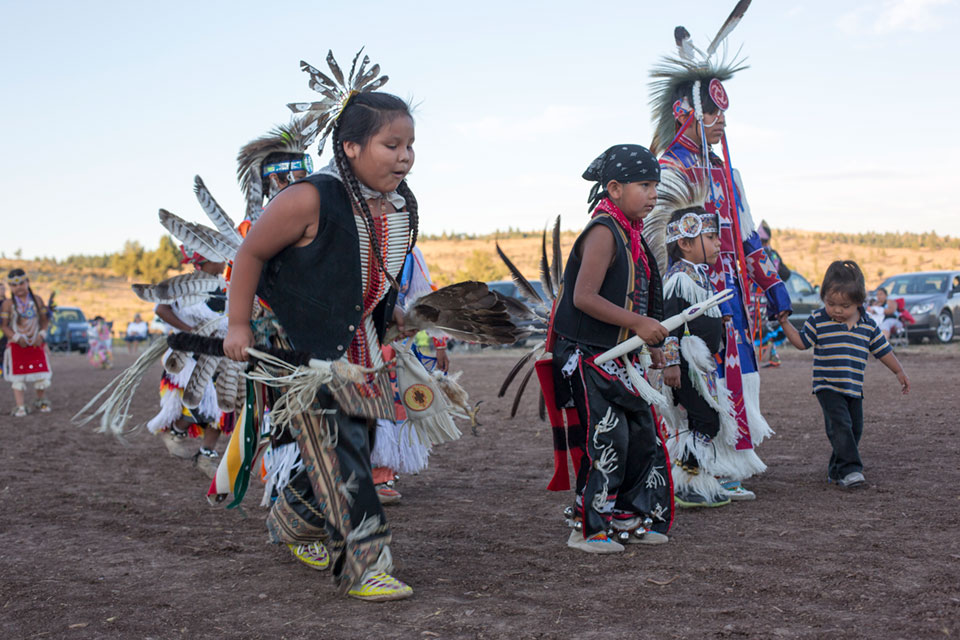 PORTLAND, Ore. (AP) — Oct. 11 might feel a little different across Oregon this year.

The second Monday in October, long celebrated as Columbus Day, will now officially be recognized as Indigenous Peoples Day in Oregon — a recognition of the Native American communities here long before Christopher Columbus set foot in the Americas.

Among tribal leaders in Oregon, the change represents overdue recognition and hope for the future, as well as a feeling that more could be done to recognize and support Indigenous communities.

According to the 2020 census, there are 129,081 Oregonians who identify as full or part American Indian and Alaska Native, comprising 3.1% of the state’s population.

Roberta Frost, secretary of the Klamath Tribes tribal council, told The Oregonian/OregonLive that progress like this always moves in increments, and that the new Indigenous Peoples Day recognition is just one step in that process.

“At some points in our history we were almost invisible, so this is a small step forward,” Frost said. “It’s not everything, but it’s an acknowledgement that we’re still here, we still have vibrant societies.”

Gail Hatcher, vice chairwoman of the Klamath Tribes tribal council, added that it’s not just about the present or the past but the future as well.

“When we are recognized and seen for who we really are, and what we celebrate and why we celebrate it, that’s a huge step for my grandchildren and their children,” she said. “The prayer that I have is that they will always be seen from this day forward.”

The Legislature overwhelmingly approved a bill declaring Oct. 11 to be Indigenous Peoples Day this spring, on a 22-7 vote in the Senate and a 50-5 vote in the House. The legislation was sponsored by the Legislature’s only Indigenous lawmakers, Rep. Tawna Sanchez, D-Portland, and Rep. Teresa Alonso-Leon, D-Woodburn.

Recognition has been hard won

Oregon is one of 13 states to recognize the second Monday of October as Indigenous Peoples Day, joining fellow western states California, Alaska, Arizona and New Mexico. South Dakota celebrates the day as Native American Day, and was the first day to replace Columbus Day, doing so in 1989.

“The recognition of Indigenous People’s Day is one more step toward shedding a light on the history of oppression and racism in our state and country,” Rep. Sanchez wrote in an email.

“We can no longer pretend that what we learned in the history books is all there is to the story. Teaching the future generations the truth will go a long way toward healing the trauma of the past.”

The discussion among local and state governments to replace Columbus Day with Indigenous Peoples Day began to accelerate in 1990, at the International Conference on Discrimination Against Indigenous Populations in the Americas, sponsored by the United Nations, though governments didn’t begin adopting the new holiday en masse until the 2014.

Oregon tribes said the local effort has been years in the making, with tribal officials and youth activists leading the way.

The Oregon legislation is explicit in its goal to establish Indigenous Peoples Day as an alternative to Columbus Day. Text of the legislation itself begins by saying Columbus’ voyage “opened the door to heinous crimes against humanity, including but not limited to the introduction of transatlantic slavery and genocidal acts against Indigenous People.”

For some Indigenous Oregonians, that denouncement is particularly important.

Brigette McConville, vice chair of the Confederated Tribes of Warm Springs tribal council, said the replacement of Columbus Day has been a long time coming.

“It was a false celebration to begin with,” she said. “When they started enacting this Indigenous day across the whole nation, I think it was good, I think it was positive, it brought up the morale of all Native people.”

Robert Kentta, cultural resources director and tribal council member for the Confederated Tribes of Siletz Indians, said Columbus Day was never a holiday his community celebrated. The state’s official recognition of the new holiday is a sign of respect that Indigenous Oregonians have long wanted, he said.

“We’ve had some pretty difficult times with the United States and the state of Oregon in our history,” Kentta said. “The state switching from celebrating Columbus Day to Indigenous Peoples Day is a big signal to the rest of Oregonians that we’re in that more collaborative and respectful time period where our Indigenous history is being considered a significant contribution to the state of Oregon.”

Need to work for a better future

The new holiday should be a recognition of the past, present and future of Indigenous peoples, Oregon tribal officials said — acknowledging the wrongs of the past, recognizing that Indigenous communities are still here, and working together for a better future.

Stacia Hernandez, chief of staff to the Confederated Tribes of Grand Ronde tribal council, said it’s important not just for the different tribes to band together, but for all cultures in Oregon to support one another as well — no matter the conflicts of the past. To her, that’s part of the great potential for Indigenous Peoples Day.

“It’s about recognizing the harms that have occurred, but growing from those and learning how to communicate with one another and to make sure that those harms that happened in the past are never perpetuated in the future,” Hernandez said.

“Every culture and every community has a very unique past, and I think it’s about holding each other up when times are hard and moving forward and taking that step together.”

State officials have work to do

For all the hope and appreciation, however, some disaffection remains.

Armand Minthorn, board of trustees member of the Confederated Tribes of the Umatilla Indian Reservation, said state officials have more work to do to mend relationships with Oregon’s Indigenous communities, including better and more frequent communication, as well as more collaboration, especially on public lands.

“For the State to recognize Indigenous Peoples Day is one thing – it’s another thing for them to walk their talk,” he said in a written statement.

He also said non-Native people could do more to learn about their Indigenous neighbors, and work to break hurtful stereotypes. The statewide recognition of Indigenous Peoples Day doesn’t necessarily change the day-to-day life on reservations and in other Indigenous communities in Oregon, he said, but there is plenty of room for a brighter future.

“As Natives, we don’t really celebrate this day. Because every day is Indigenous People’s Day for us.” Minthorn said. “As long as we continue to recognize our ancestors, we recognize our traditional ways and language, things will continue to be the same. It would be of great benefit for others to help us with that. Because we live side by side and share the same resources, why can’t we work side by side?”