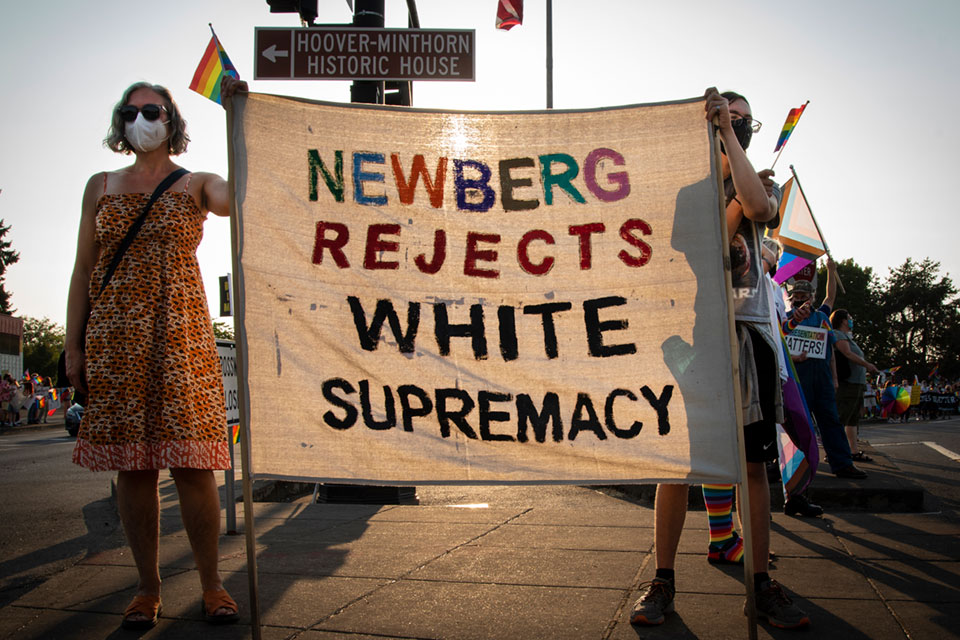 NEWBERG, Ore. (AP) — An Oregon school board has banned educators from displaying Black Lives Matter and gay pride symbols, prompting a torrent of recriminations and threats to boycott the town and its businesses.

Newberg, a town of 25,000 residents situated 25 miles (40 kilometers) southwest of Portland in gorgeous wine country, has become an unlikely focal point of a battle between the left and right across the nation over schooling.

The City Council has condemned the action by the Newberg School Board. So did members of color of the Oregon Legislature and House and Senate Democrats. The American Civil Liberties Union of Oregon is threatening to sue. The Oregon State Board of Education called on the school board to reverse course, saying student identities should be welcomed and affirmed.

But the four conservative members of the seven-member board are digging in their heels. Member Brian Shannon, who proposed the ban, said lawmakers from Portland should keep out of the school district's business and instead focus on Portland, where homelessness is an issue.

Opponents say the board has emboldened racists. On Sept. 17, a special education staffer at a Newberg elementary school showed up for work in blackface, saying she was portraying anti-segregation icon Rosa Parks in order to protest a statewide vaccine mandate for educators. She was immediately placed on administrative leave.

The same week, word emerged that some Newberg students had participated in a Snapchat group in which participants pretended to buy and sell Black fellow students. Newberg Public Schools Superintendent Joe Morelock said there will be an investigation and disciplinary action meted out.

Local resident Peggy Kilburg said they should be banned from schools, as well as signs supporting any political position, like National Rifle Association posters. 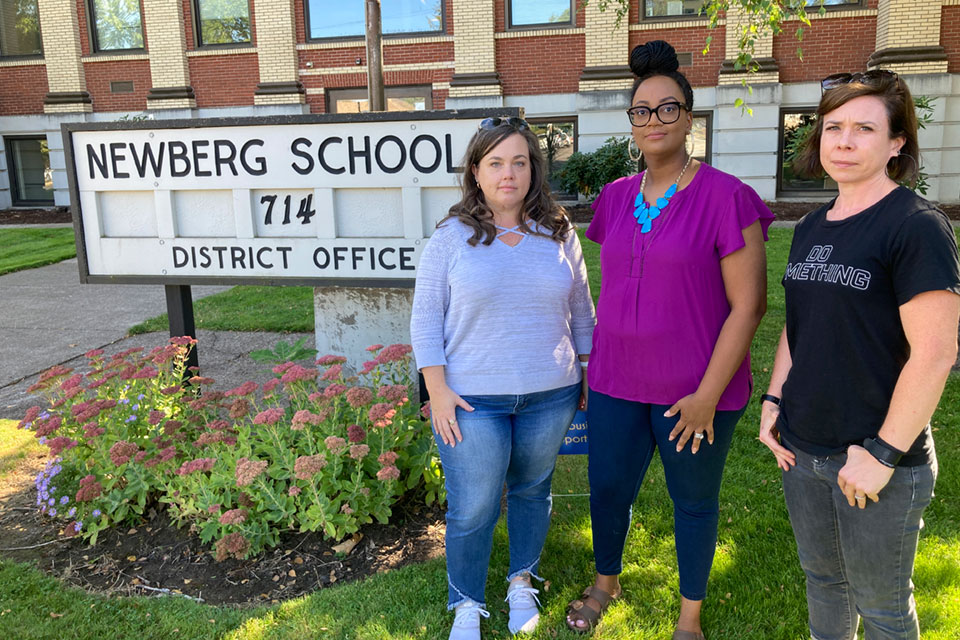 From left, Beth Woolsey, Tai Haden-Moore and AJ Schwanz , who are members of a group called Newberg Equity in Education which is advocating for inclusion and equity in schools, stand in front of a school district office in Newberg, Ore., on Tuesday, Sept. 21, 2021. The Newberg School Board has banned educators from displaying Black Lives Matter and gay pride symbols, prompting a torrent of recriminations and threats to boycott the town and its businesses. (AP Photo/Andrew Selsky)

Robert Till, who is gay and a sophomore at Newberg High School, said he is embarrassed to live in Newberg. He cited an estimate from the Trevor Project, a group that aims to end suicide among LGBTQ young people, that at least one LGBTQ person between the ages of 13–24 attempts suicide every 45 seconds in the U.S.

“A simple pride or BLM flag in a classroom shows the love and acceptance that we need," Till said, his voice shaking with anger.

"Pride flags can literally save someone’s life, and you’re just going to take that away?”

School board chairman Dave Brown, who voted for the sign ban, declared in an earlier Zoom meeting that “I'm not a racist.” 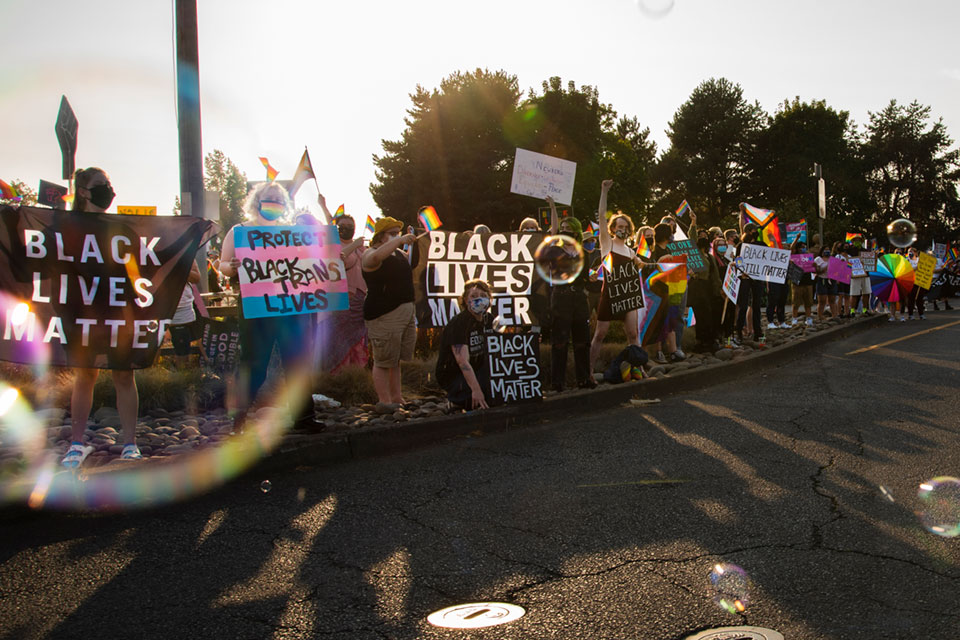 Protesters against a new school policy that bans Black Lives Matter and Pride flags across Newberg School District facilities wave at cars entering and leaving Newberg, Ore., on Aug. 24, 2021. The policy has prompted a torrent of recriminations and threats to boycott the town and its businesses. (Jozie Donaghey/The Oregonian via AP)

Shannon defended the ban, which hasn't been imposed yet.

“I don’t think any of us can deny the fact that these symbols are divisive," Shannon said. "They’ve divided our community and gotten our attention away from where it needs to be, just teaching the basic fundamentals of education.”

Opponents of the ban say it is the board that is being divisive and distracting from the challenges as educators begin in-person instruction with safety protocols after a year of remote teaching because of COVID-19.

“It has been difficult to see a community divided. You can see the anguish on both sides. It makes being an educator harder than it already was,” said a faculty member at Newberg High School.

Speaking on condition she not be named for fear of being harassed online, she said more students than ever are displaying gay pride and Black Lives Matter symbols on lockers, water bottles and laptops since the board took its vote in August. The ban does not apply to students.

Alexis Small, a 15-year-old high school junior who is Black, believes the members who endorsed the ban simply don't approve of people who aren't like them.

“The message that I feel is hate," Small said in a telephone interview.

"I mean, I can’t say that this decision was made out of love or made out of what’s best for people. I genuinely think that they did this out of hate.”

In June 2020 — as Black Lives Matter protests roiled the nation after the police murder of George Floyd in Minneapolis — the board took a completely different stance, condemning racism and committing to being an anti-racist school district. But conservatives gained a majority in school board elections last May amid a light turnout, and everything changed.

Tai Harden-Moore, a Black candidate who lost, recalls a nasty election. Comments on social media supporting her opponent called Harden-Moore un-American and claimed she hated whites, she said. Her campaign signs were ripped from the ground or left in place — with tree branches placed on top.

“My sign, I've got my face on it, and so for them to put the branches on it, it was like this weird link to lynching for me,” Harden-Moore said.

Harden-Moore has joined a group called Newberg Equity in Education, which is advocating for inclusion and equity in Newberg schools. 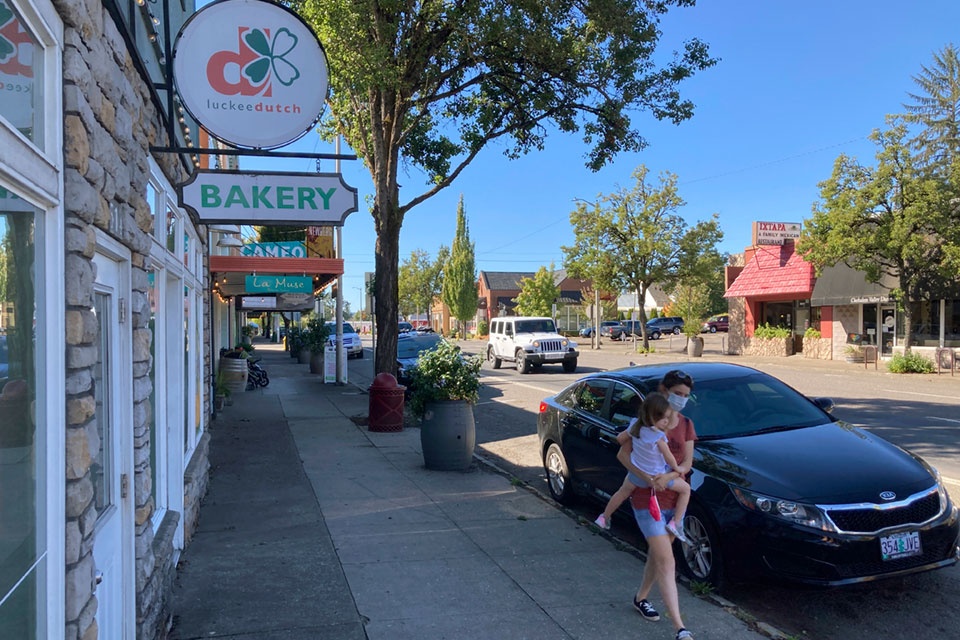 A woman and her child walk through downtown Newberg, Ore., on Tuesday, Sept. 21, 2021. The Chehalem Valley Chamber of Commerce told the school board that it has received numerous phone calls and emails from people saying they will boycott Newberg, the valley's main town, because of its ban on educators displaying Black Lives Matter and gay pride symbols in schools. (AP Photo/Andrew Selsky)

The Chehalem Valley Chamber of Commerce told the school board that it has received numerous phone calls and emails from people saying they will boycott Newberg, the valley’s main town.

“As business leaders and owners, we are very concerned about the impact this has on our businesses and on the reputation of our community,” the chamber said, the Newberg Graphic newspaper reported.

Newberg Mayor Rick Rogers told the four conservative board members their actions can hurt the town, which features a dozen wine tasting rooms and a university founded by Quakers.

“While you may believe your actions only affect the school district, please know in truth your actions impact us all. To thrive, Newberg must be welcoming to all,” he wrote.