This Is Not a Camp 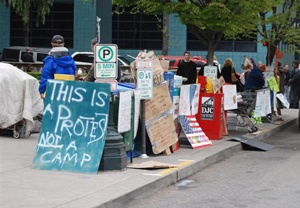 For several weeks now, homeless persons in Portland have gathered on the lawn of City Hall for a protest against city policies against them – namely the sit-lie ordinance, which some homeless advocates say has been used disproportionately against many homeless by the Portland Business Alliance's private security forces; the prohibition against camping in the city, which makes sleeping out of doors -- being homeless – illegal; and demanding more access to shelters and affordable housing. Despite spending most days and nights camped out in front of the city's governmental center, protestors clarify, "This is not a camp, this is a protest."