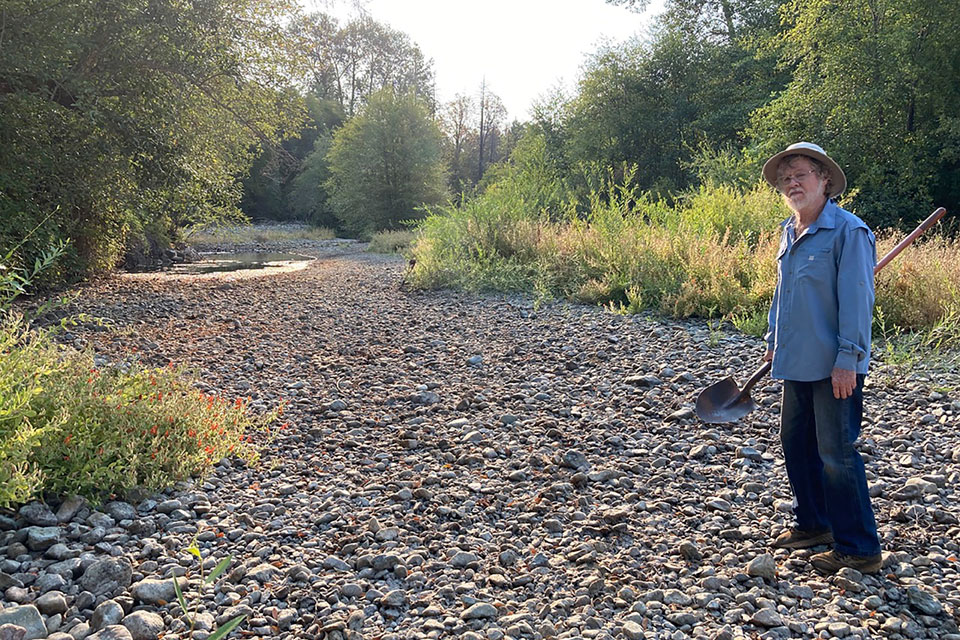 LA PINE, Ore. (AP) — Jack Dwyer pursued a dream of getting back to the land by moving in 1972 to an idyllic, tree-studded parcel in Oregon with a creek running through it.

But now, Deer Creek has run dry after several illegal marijuana grows cropped up in the neighborhood last spring, stealing water from both the stream and nearby aquifers and throwing Dwyer's future in doubt.

From dusty towns to forests in the U.S. West, illegal marijuana growers are taking water in uncontrolled amounts when there often isn't enough to go around for even licensed users. Conflicts about water have long existed, but illegal marijuana farms — which proliferate despite legalization in many Western states — are adding strain during a severe drought.

In California, which legalized recreational marijuana in 2016, there are still more illegal cannabis farms than licensed ones, according to the Cannabis Research Center at the University of California, Berkeley.

"Because peak water demand for cannabis occurs in the dry season, when streamflow is at its lowest levels, even small diversions can dry streams and harm aquatic plants and animals,” a study from the center said.

Some jurisdictions are fighting back. California's Siskiyou County Board of Supervisors in May banned trucks carrying 100 gallons or more of water from using roads leading to arid tracts where some 2,000 illegal marijuana grows were purportedly using millions of gallons of water daily.

The illegal grows are “depleting precious groundwater and surface water resources” and jeopardizing agricultural, recreational and residential water use, the county ordinance says.

In Oregon, the number of illegal grows appears to have increased recently as the Pacific Northwest endured its driest spring since 1924.

Many are operating under the guise of being hemp farms, legalized nationally under the 2018 Farm Bill, said Mark Pettinger, spokesman for the Oregon Liquor and Cannabis Commission. Under the law, hemp's maximum THC content — the compound that gives cannabis its high — must be no greater than 0.3%. Fibers of the hemp plant are used in making rope, clothing, paper and other products.

Josephine County Sheriff Dave Daniel believes there are hundreds of illegal grows in his southern Oregon county alone, many financed by overseas money. He believes the financiers expect to lose a few grows but the sheer number of them means many will last until the marijuana is harvested and sold on the black market outside Oregon.

None of the new sites has been licensed to grow recreational marijuana, Pettinger said. Regulators, confronted in 2019 by a backlog of license applications and a glut of regulated marijuana, stopped processing new applications until January 2022. 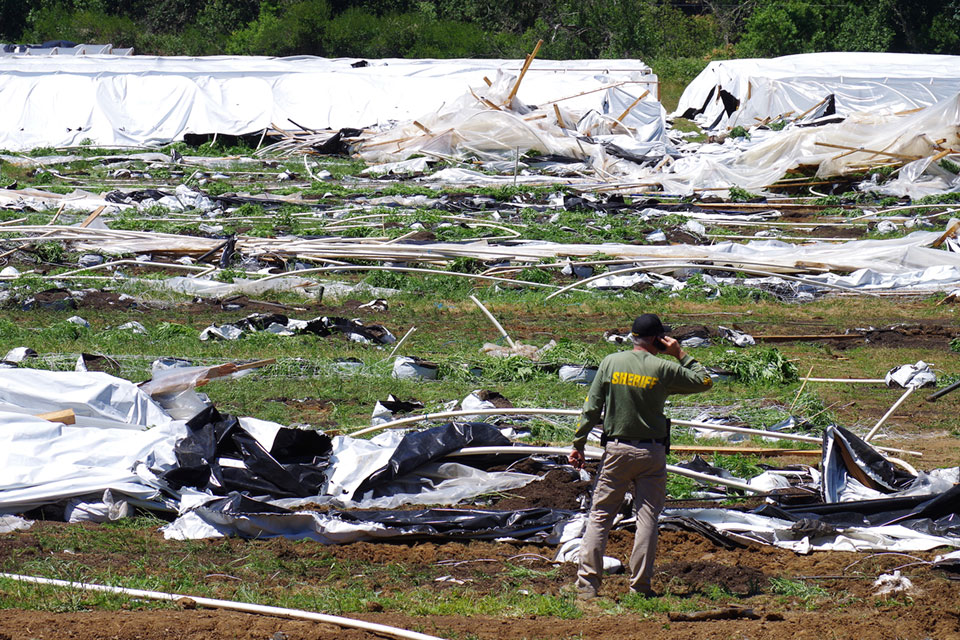 Josephine County Sheriff Dave Daniel stands amid the debris of plastic hoop houses destroyed by law enforcement, used to grow cannabis illegally, near Selma, Ore., on Wednesday, June 16, 2021. From dusty towns to forests in the West, illegal marijuana growers are taking water in uncontrolled amounts when often there isn't enough to go around for even licensed users. . (Shaun Hall/Grants Pass Daily Courier via AP)

The illegal grows have had “catastrophic” consequences for natural water resources, Daniel said. Several creeks have dried up far earlier than normal and the water table — the underground boundary between water-saturated soil and unsaturated soil — is dropping.

The water for those plants came through a makeshift, illicit system of pumps and hoses from the nearby Illinois River, which belongs to the Wild and Scenic Rivers System, created by Congress to preserve certain rivers with outstanding natural, cultural, and recreational values.

Daniel said another illegal grow that had 200,000 plants was drawing water from Deer Creek using pumps and pipes. He called it “one of the most blatant and ugly things I’ve seen.”

“They had actually dug holes into the ground so deep that Deer Creek had dried up ... and they were down into the water table,” the sheriff said. 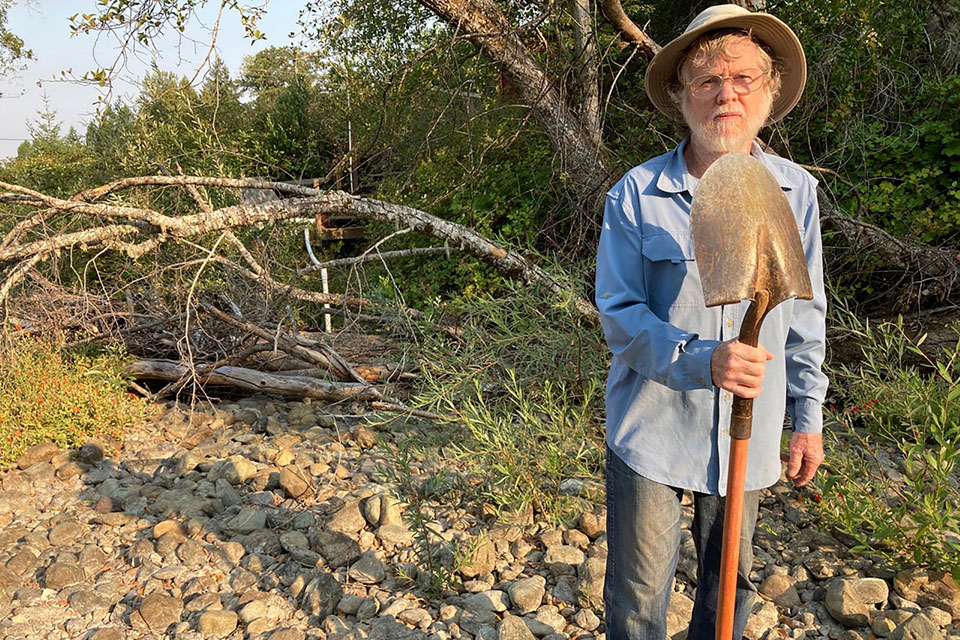 Jack Dwyer stands on the dry creek bed of Deer Creek in Selma, Ore. on Thursday, Sept. 2, 2021. In 1972, Dwyer pursued a dream of getting back to the land by moving to an idyllic, tree-studded parcel in Oregon with Deer Creek running through it. But now, Deer Creek has become a dry creek bed after several illegal marijuana grows cropped up in the neighborhood last spring, stealing water from both the stream and aquifers and throwing Dwyer's future in doubt. (Carol Valentine via AP)

Dwyer has a water right to Deer Creek, near the community of Selma, that allows him to grow crops. The creek can run dry late in the year sometimes, but Dwyer has never seen it this dry, much less this early in the year.

The streambed is now an avenue of rocks bordered by brush and trees.

Over the decades, Dwyer created an infrastructure of buried water pipe, a dozen spigots and an irrigation system connected to the creek to grow vegetables and to protect his home against wildfires. He uses an old well for household water, but it's unclear how long that will last.

“I just don’t know what I will do if I don’t have water,” the 75-year-old retired middle school teacher said.

Marijuana has been grown for decades in southern Oregon, but the recent explosion of huge illegal grows has shocked residents.

“The people of the Illinois Valley are experiencing an existential threat for the first time in local history,” Hall said.

In the high desert of central Oregon, illegal marijuana growers are also tapping the water supply that's already so stressed that many farmers, including those who produce 60% of the world's carrot-seed supply, face a water shortage this year.

The Bend area has experienced a population boom, putting more demands on the water supply. The illegal grows are making things worse.

In La Pine, south of Bend, Rodger Jincks watched a crew drill a new well on his property. The first sign that his existing well was failing came when the pressure dropped as he watered his tiny front lawn. Driller Shane Harris estimated the water table is dropping 6 inches (15 centimeters) per year. 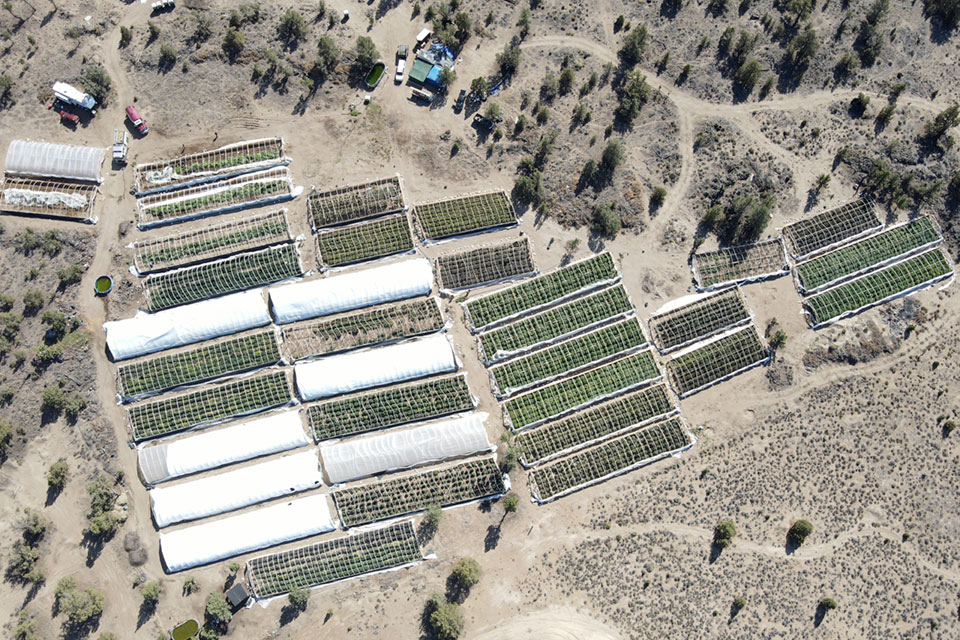 A marijuana grow is seen on Sept. 2, 2021, in an aerial photo taken by the Deschutes County Sheriff's Office the day officers raided the site in the community of Alfalfa, Ore. On the 30-acre property in the high desert they found 49 greenhouses containing almost 10,000 marijuana plants and a complex watering system with several 15,000-20,000 gallon cisterns. (Deschutes County Sheriff Via AP)

Sheriff’s deputies last November raided an illegal grow a block away that had 500 marijuana plants.

Jincks' neighbor, Jim Hooper, worries that his well might fail next. He resents the illegal grows and their uncontrolled used of water.

“With the illegals, there’s no tracking of it,” Hooper said. "They’re just stealing the water from the rest of us, which is causing us to spend thousands of dollars to drill new wells deeper.”