Brian Stimson of The Skanner
Published: 07 May 2008 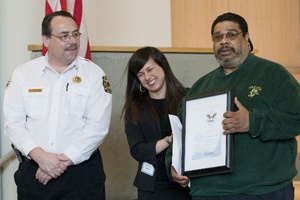 Clarence Harper (right), a volunteer with the Neighborhood Emergency Team since 1995, was awarded a Presidential Lifetime Achievement Award from Americorps. He is pictured with Carmen Murlow, the director of the Portland Office of Emergency Management and John Klum, Portland's new fire chief.
Harper said he began volunteering with the NET team out of selfish reasons – he wanted to know how to make sure his family and friends were safe in the event of a disaster. But after getting involved with emergency preparedness, he said he realized the altruism of his actions.
"My goal is to reach out to people who are disenfranchised and prevent what happened after Katrina," Harper said.
This isn't the only time Harper has been recognized for his volunteer work for the Office of Emergency Management. He was knighted as a Royal Rosarian; he received the Presidential Call to Service Medal; and also received a Star Award after 10 years of service with NET.
Harper said he regularly speaks to the public about the benefits of learning emergency management skills and is currently training with the Red Cross to be certified to travel to disaster zones all over the world.
"I've become so skilled," said Harper, a Jefferson High School graduate who has undergraduate and master's degrees from the University of Oregon and is a qualified mental health professional. "There have been situations where I've used emergency medical procedures or CPR on people who have lived."
Harper said it takes a lot of work and dedication to remain certified in emergency procedures – much of it resembling the work done by firefighters and other professionals. In the end, he said it is more than worth it and encourages others to follow in his footsteps.
"When you serve your community, you become blessed by your community," he said.