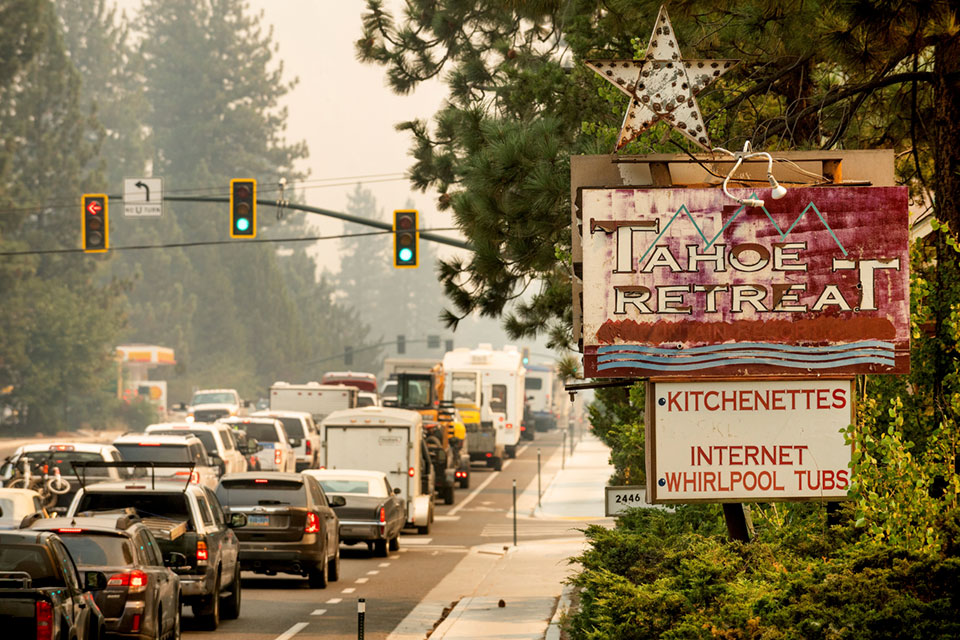 SOUTH LAKE TAHOE, Calif. (AP) — A huge firefighting force gathered Tuesday to defend Lake Tahoe from a raging wildfire that forced the evacuation of California communities on the south end of the alpine resort and put others across the state line in Nevada on notice to be ready to flee.

The streets of the popular vacation haven, normally filled with thousands of summer tourists, were all but deserted after rapid growth of the Caldor Fire forced a mass evacuation on Monday and triggered hours of gridlocked traffic.

“It's more out of control than I thought,”

evacuee Glen Naasz said of the fire that by late Monday had been pushed by strong winds across two major highways, burning mountain cabins as it swept down slopes into the Tahoe Basin.

More firefighters arrived just after dark Monday and many were dispatched to protect homes in the Christmas Valley area, about 10 miles (16 kilometers) from the city of South Lake Tahoe. 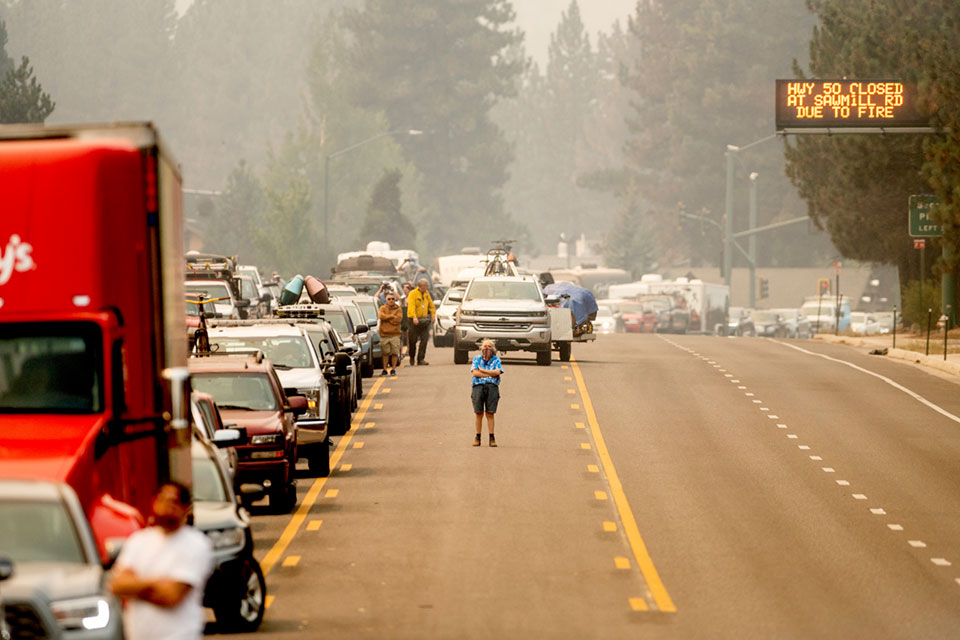 With the Caldor Fire approaching, Jim Mrazek stands outside his vehicle on Highway 50 as evacuee traffic stands still in South Lake Tahoe, Calif., on Monday, Aug. 30, 2021. Mrazek, who was stopped in that spot for more than an hour, said he was considering taking his boat into the lake instead of trying to drive out. (AP Photo/Noah Berger)

Ken Breslin was stuck in bumper-to-bumper traffic less than a mile (1.6 kilometers) from his home in the city of 22,000, with only a quarter-tank of gas in his Ford Escape. His son begged him to leave Sunday night, but he shrugged him off, certain that if an evacuation order came, it would be later in the week.

“Until this morning, I didn’t think there was a chance it could come into this area. Now it’s very real.”

“There is fire activity happening in California that we have never seen before. The critical thing for the public to know is evacuate early,” said Chief Thom Porter, director of the California Department of Forestry and Fire Protection, or Cal Fire. “For the rest of you in California: Every acre can and will burn someday in this state.” 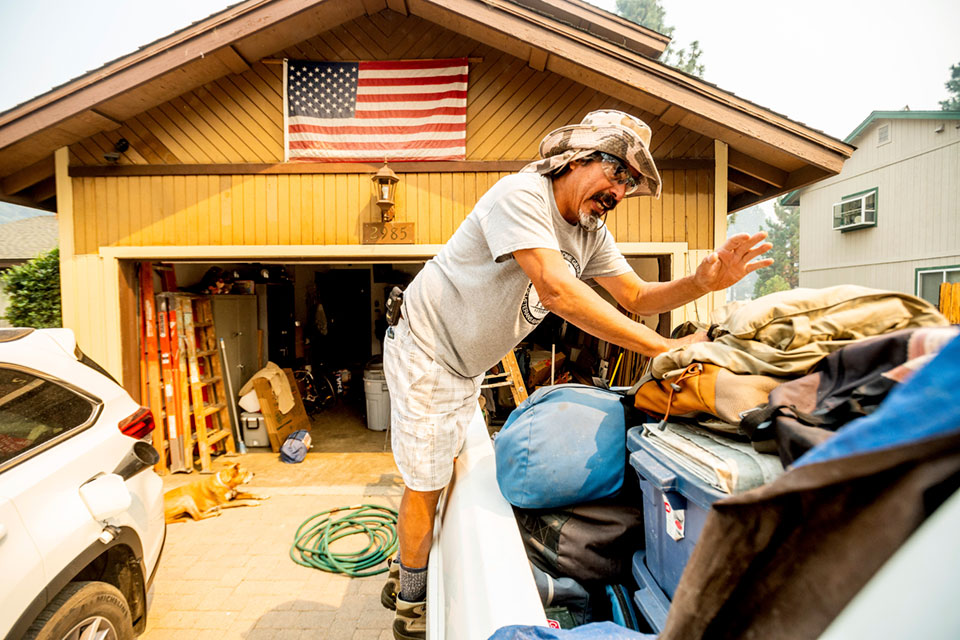 The threat of fire is so widespread that the U.S. Forest Service announced Monday that all national forests in California would be closed until Sept. 17.

“We do not take this decision lightly, but this is the best choice for public safety,” Regional Forester Jennifer Eberlien said.

More than 15,000 firefighters were battling dozens of California blazes, including crews from Utah, Washington, Wisconsin and West Virginia, said Mark Ghilarducci, director of California’s Office of Emergency Services. About 250 active-duty soldiers were being trained in Washington state to help clear forest debris by hand.

Crews from Louisiana had to return to that state because of Hurricane Ida, he said. 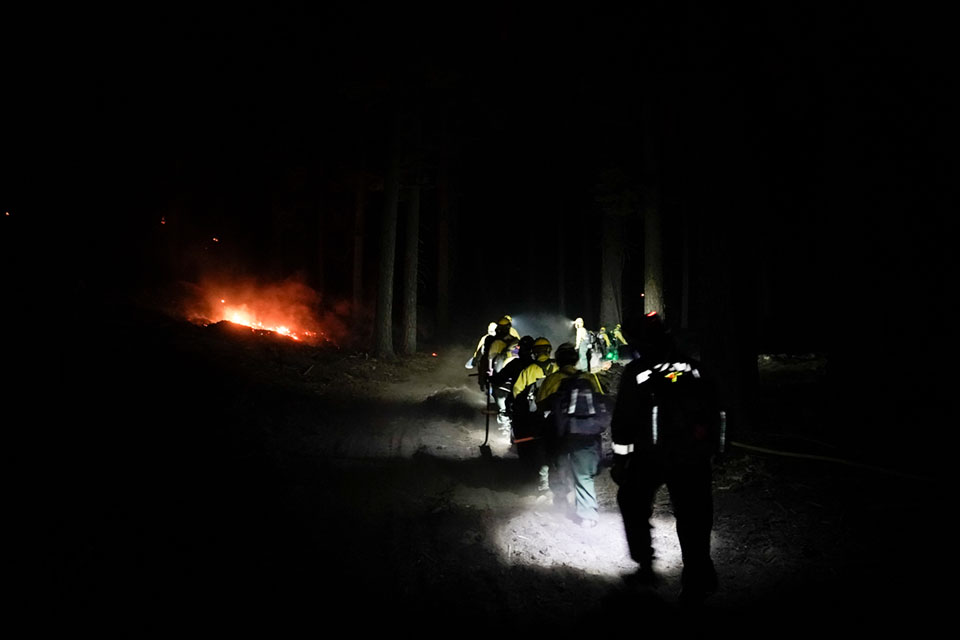 Firefighters walk into the woods to monitor the Caldor Fire burning near South Lake Tahoe, Calif., Monday, Aug. 30, 2021. As the winds returned this week, the Caldor Fire roared over the Sierra crest and bore down on the southern end of Lake Tahoe. (AP Photo/Jae C. Hong)

Only twice in California history have blazes burned from one side of the Sierra Nevada to the other, both this month, with the Caldor and Dixie fires, Porter said.

The Dixie, the second-largest wildfire in state history at 1,215 square miles (3,147 square kilometers), was burning about 65 miles (105 kilometers) north of the Lake Tahoe-area blaze. It prompted new evacuation orders and warnings Monday.

Mayor Tamara Wallace thought the Caldor Fire would stay farther away. Fires in the past did not spread so rapidly.

“It’s just yet another example of how wildfires have changed over the years,” Wallace said as she gathered treasured items and prepared to leave.

The last two wildfires that ripped through populated areas near Tahoe were the Angora Fire that destroyed more than 200 homes in 2007 and the Gondola Fire in 2002 that ignited near a chairlift at Heavenly Mountain Resort.

Since then, dead trees have accumulated and the region has coped with serious droughts, Wallace said. Climate change has made the West much warmer and drier in the past 30 years and will continue to make weather more extreme and wildfires more frequent and destructive, scientists say.

Traffic out of South Lake Tahoe crawled Monday, but Wallace said the evacuation was orderly because residents heeded officials’ orders.

Not everyone agreed. The California Highway Patrol added “quite a bit of additional personnel” to help guide a chaotic evacuation from South Lake Tahoe, as huge traffic jams slowed the evacuation of vehicles, CHP Assistant Commissioner Ryan Okashima said. 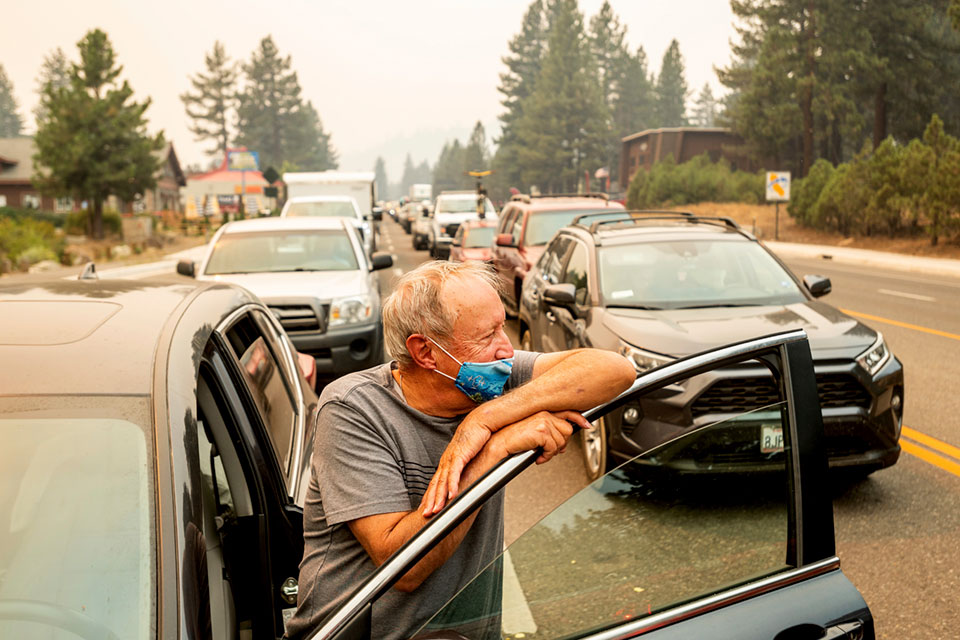 With the Caldor Fire approaching, Jim Mrazek stands outside his vehicle on Highway 50 as evacuee traffic stands still in South Lake Tahoe, Calif., on Monday, Aug. 30, 2021. Mrazek, who was stopped in that spot for more than an hour, said he was considering taking his boat into the lake instead of trying to drive out. (AP Photo/Noah Berger)

The fire destroyed multiple homes Sunday along Highway 50, one of the main routes to the lake’s south end. It also roared through the Sierra-at-Tahoe ski resort, demolishing some buildings but leaving the main base buildings intact. Crews used snow-making machines to douse the ground.

Cabins burned near the unincorporated community of Echo Lake, where Tom Fashinell has operated Echo Chalet with his wife since 1984. The summer-only resort offers cabin rentals, but was ordered to close early for the season because of wildfires.

Fashinell said he was glued to the local TV news. “We’re watching to see whether the building survives,” he said.

The Caldor Fire has scorched nearly 300 square miles (777 square kilometers) since breaking out Aug. 14. After the weekend’s fierce burning, containment dropped from 19% to 16%.

More than 600 structures have been destroyed, and at least 33,000 more were threatened. Nevada Gov. Steve Sisolak on Monday declared a state of emergency in his state, citing the high risk that the California would burn across the state line.

Diane Kinney, who has lived in South Lake Tahoe since the 1970s, said this it was the first time her neighborhood was ordered to evacuate. She and her husband packed up keepsakes, jewelry and insurance papers shortly after noon. They left behind their 1964 Chevrolet Chevelle.

“There are definitely advantages of being in the mountains, being with these beautiful pine trees,” she said. “But we definitely have to get out now.”