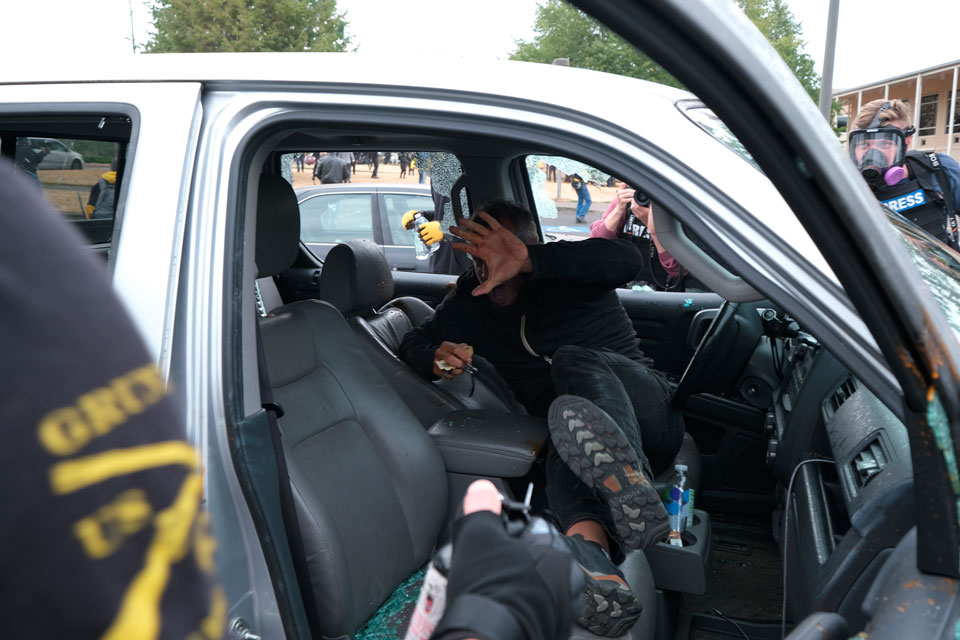 Cars attempted to drive by Sunday as fireworks exploded in the road and there were confrontations between people in helmets and gas masks and armed with baseball bats, paintball guns and chemical spray.

Before the skirmish, the latest in a saga of political conflict that has plagued the city for years, officials said people shouldn't expect to see officers trying to intervene or keep the sides apart. 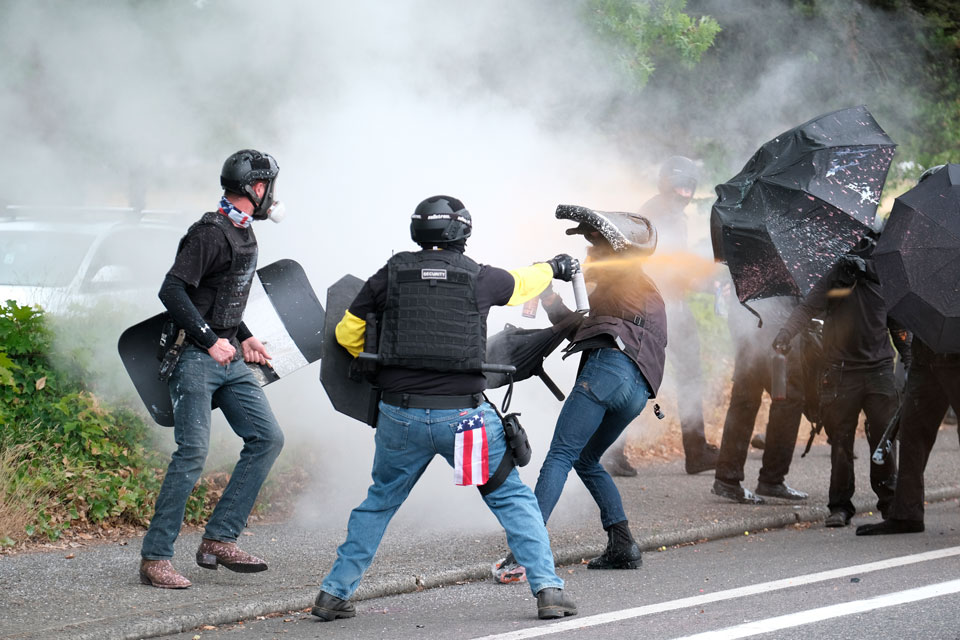 This Sunday, Aug. 22, 2021 photo, members of the far-right group Proud Boys and anti-fascist protesters spray bear mace at each other during clashes between the politically opposed groups in Portland, Ore. Police in Portland have been criticized that they did little to prevent violent clashes between right- and left-wing protesters on Sunday. (AP Photo/Alex Milan Tracy)But the lack of intervention by law enforcement has left residents feeling “terrorized and abandoned" and local and state leaders frustrated, in addition to further hurting the image of the Police Bureau that has struggled to find its footing in the city.

“As soon as the fighting began and spilled out into the neighborhood, the police should have come in and stopped it,” said state Sen. Michael Dembrow, a Democrat who represents a large swath of the Parkrose community where the confrontation took place.

“I’ve heard from a number of Parkrose residents who felt exposed and betrayed by the lack of police presence.

"They have every reason to feel that way.”

Portland is no stranger to differing political groups fighting in the streets. Nearly a year ago, a caravan of Donald Trump supporters drove through the city and were met with counterprotesters. Altercations broke out between the groups and a right-wing protester was fatally shot.

Ahead of last week's demonstrations, Portland Police Chief Chuck Lovell said he took into account “legal restrictions” when responding to protests, the history of officers' presence increasing tensions and the department's staffing shortage.

Police have 145 less officers than they did a year ago. In June, a team of 50 police officers, who served on a specialized crowd-control unit in Portland, Oregon, and respond to ongoing, often violent protests, resigned en masse after a team member was indicted on criminal charges.

Based on these factors, Lovell said he made the decision not to “place officers in an extraordinarily unsafe position between groups of people who are highly motivated to confront one another.”

Far-left antifascists gathered at Portland's Tom McCall Waterfront park early Sunday afternoon waving Black Lives Matter flags. About 8 miles away at an abandoned parking lot in Parkrose, Proud Boys gathered and listened to speeches decrying the antifascist movement and calling for the release of those arrested during the U.S. Capitol insurrection on January 6.

“I will say that the decision by the Proud Boys to rally in Parkrose was reprehensible on a number of levels.

"They chose to take their hate-filled rally outside of downtown, the usual site of protests and demonstrations, and move it to one of Portland’s most racially and ethnically diverse neighborhoods,” Dembrow said.

In the second half of the footage, a family out shopping runs to their car pic.twitter.com/9qWDqUmlvz

The clash between subsets of the two groups interrupted traffic around 4 p.m. on a busy thoroughfare in the Parkrose neighborhood, and crept into business parking lots — forcing at least one gas station to close early — and onto Parkrose High School property. At least one video, shared online by a Portland Tribune reporter, showed a family with young children running to their car to escape the clash.

After 30 minutes of fighting, the two sides separated on their own.

Many from out of town

The Oregonian/Oregon Live reported that Portland police were monitoring the fight from an airplane. In addition, as of Wednesday police had made only one arrest related to the clashes and demonstrations. 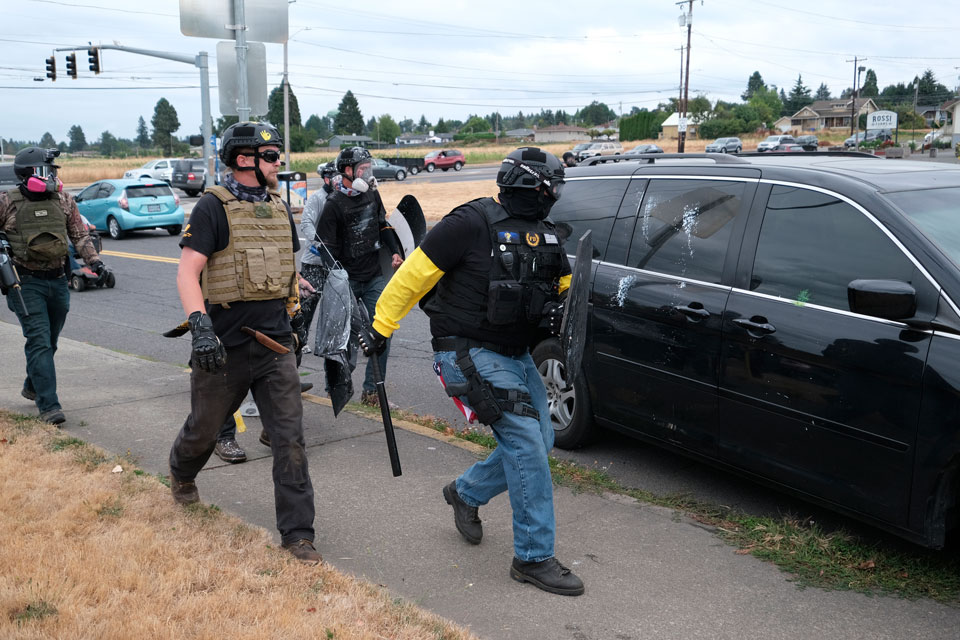 This Sunday, Aug. 22, 2021 photo, members of the far-right group Proud Boys surround a car they believe is driven by anti-fascist counter-protesters during clashes between the politically opposed groups in Portland, Ore. Police in Portland have been criticized that they did little to prevent violent clashes between right- and left-wing protesters on Sunday. (AP Photo/Alex Milan Tracy)But, even as group members — many of whom officials said were from out of town or out of state — left the area, residents were left reeling by the violent events.

Michael Lopes Serrao, superintendent of the Parkrose School District, said he felt “heartbroken for the community” knowing some of his students and their families watched the violence from their homes. Community members were left picking up trash and remnants of paint, glass and bear mace the following days, he said.

“It’s confusing at best, and frustrating for many who live here. East Portlanders traditionally have felt more ignored by the city in general, so I believe this only exacerbates that concern,” Lopes Serrao said. “Why would you ignore one of the areas of the city that has been historically underserved.

"If Portland is about equity, then we should be elevating this community and protecting its vulnerability."

The idea that the lack of police presence hurt the department's already negative image was reiterated by Michael Dreiling, a professor of sociology for the University of Oregon.

“If the police department is trying to manage their image, refusing to show up and enforce the law, when far-right extremists show up and instigate violence, is not a good way to do it,” Dreiling said.

However, in the days following the clash, Mayor Ted Wheeler and Lovell said they stood by the police bureau's approach and said it "contained” violence between the groups.

“With strategic planning and oversight, the Portland Police Bureau and I mitigated confrontation between the two events," Wheeler said. “And minimized the impact of the weekend's events to Portlanders.”

Sara Cline is a corps member for the Associated Press/Report for America Statehouse News Initiative. Report for America is a nonprofit national service program that places journalists in local newsrooms to report on undercovered issues.