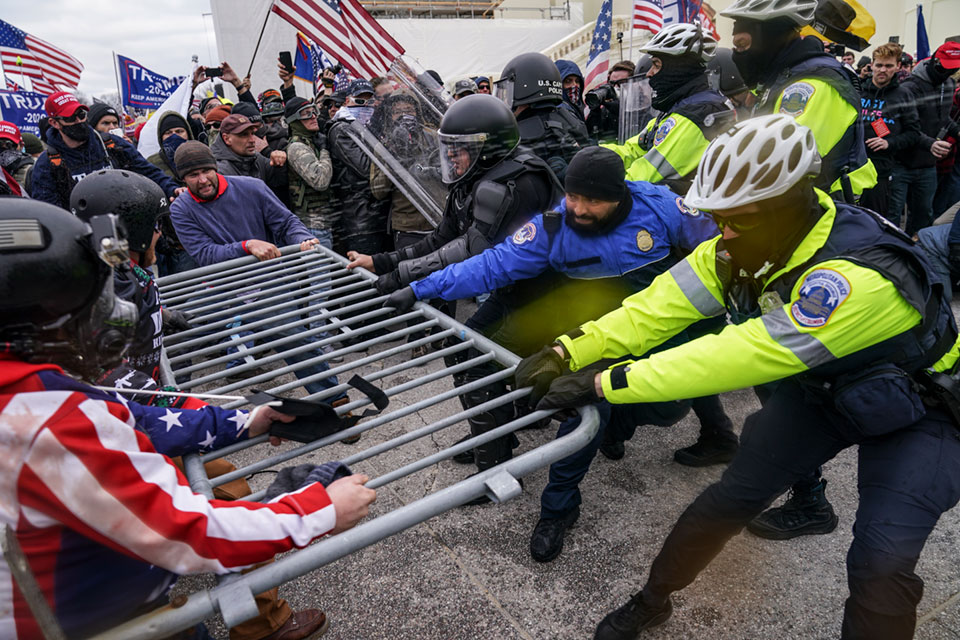 SEATTLE (AP) — The Washington Supreme Court has agreed to hear a case involving six Seattle police officers who were in Washington D.C. during the Jan. 6 insurrection and sued several people who filed public records requests to disclose the officers' names.

"It it is abundantly clear that whether the identity of these officers should be revealed is an issue of considerable public interest," Michael Johnston, court commissioner, said in a ruling released Thursday.

Janet Thoman, who along with Neil Fox represents a law student sued by the officers, said they're pleased the court will decide the case.

“The public’s right to information about those that serve us is of fundamental and urgent importance,” Thoman said.

“We look forward to protecting the rights of four public servants who, despite no findings of wrongdoing following a comprehensive administrative investigation, are being relentlessly targeted by members of the public solely based on their constitutionally protected right to freely associate,” Russ said.

A message sent to Seattle Police Guild President Mike Solan seeking comment on the court’s decision was not immediately returned.

The six Seattle officers were in the nation's capital to attend President Donald Trump’s “Stop the Steal” rally. Their trip became public after one officer posted a photo on Facebook of herself and another officer at the demonstration. Four other officers later admitted they were there, too, but said they were not involved in the riot.

The officers filed a lawsuit in February against a list of people who filed public records requests seeking the officers’ identities and information about the investigation by the Office of Police Accountability into their activities.

A judge ordered the release of their names in March and the officers appealed. Sam Sueoka, a law student named in the suit, asked the Washington Supreme Court to decide the issue. On Thursday, the court said it will hear the case. Next, they'll set a time for oral arguments.

“The aftershocks of the attack on the Capitol are still being felt, and they touch on fundamental questions regarding the intersection of law enforcement, politics, our democratic institutions, and racial and social justice," Johnston said. “Stated another way, the past 18 months have been a time of great and continuing upheaval nationally, and this case is a small part of those troubles.

"This context lends urgency to this dispute.”

The OPA investigation, completed last month, found that at least two of the officers had violated the law and department policy by trespassing at the U.S. Capitol while rioters stormed the building.

At that point, Chief Adrian Diaz said he would decide on disciplinary action within 30 days. A message asking whether he had made a decision on the matter was not immediately returned.

The four officers who were cleared by the OPA are on active duty, but the two found to have violated the law and policy have been placed on administrative leave, police spokesperson Valerie Carson said.

The day after the OPA report was released, the lawyers for the officers resigned the case. The four officers who were cleared by the OPA have secured new lawyers with the firm Tomlinson Bomsztyk Russ.