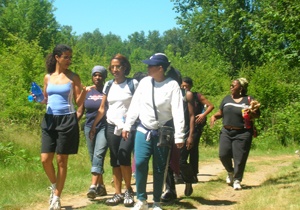 Four years ago, Tricia Tillman and Greg Wolley began leading simple, easy urban hikes for a handful of locals with no formal transportation.
Now entering its fourth season, the African American Outdoor Association has blossomed into a club offering hikes for all difficulty levels, snowshoeing, skiing, biking and kayaking.
New members are leading hikes, and with a transportation grant from Enterprise Rent-A-Car, they now provide free transportation for participants.
"(The group) has institutionalized itself mainly from word of mouth," Wolley says.
It's not only a group that promotes fun athletic activities, says Tillman, but it also creates community.
"I'm proud of how many people we've brought out," she said. "New people are taking leadership roles and coordinating (trips) … and building social networks."
It has also provided a way for Black hikers to dissolve the notion that the national and state park systems are only for White people. Tillman says she hears comments like "Black people don't ski or snowshoe" — from inside and outside the community.
"Maybe not a lot of people do," she said. "But it's an option … We open up what's possible for them."
And because cost is often a factor for many people, the Association offers the majority of its activities at no or low cost. Stores such as Fit Right NW provided snowshoes at no cost and other companies have helped offset the rental cost of kayaks and bicycles.
"Most things we do are free," Wolley said.
They're also healthy and fun. Wolley said helping the community increase their physical fitness is a goal of the Association – an easy goal.
"They're hardly noticing because they're out having a good time," he said.
During a trip last year along Eagle Creek in the Columbia River Gorge – an uphill hike that follows a creek to a number of spectacular waterfalls – one woman was adamant about not going, says Wolley. After much prodding from her friends, and many declarations that she wasn't going to go, the woman found herself leading the group of hikers. When she arrived at the destination — Punchbowl Falls — she and the others relaxed by the water, sticking their feet in the cool stream. Wolley said, in the end, the reluctant hiker found it very rewarding.
"That's a big part of it, the fear of the unknown," he said. Getting African Americans to engage in wilderness activities is part inexperience and part history, says Wolley.
"Historically, the woods were dangerous for Black people to be out in," he said. "We're only a few generations from the migrations from the South."
But Tillman and Wolley, as well as the large group who have taken part in activities organized by the African American Outdoor Association, know there's nothing to fear but fear itself.
The next scheduled hike is Saturday, May 3 at the Ridgefield National Wildlife Refuge. The group will leave at 9 a.m. from the Matt Dishman Community Center, 77 N.E. Knott St. For more information and to register for the free hike, call Trisha Tillman at 503-891-1529 or Greg Wolley at 503-957-0024 or email [email protected]. For