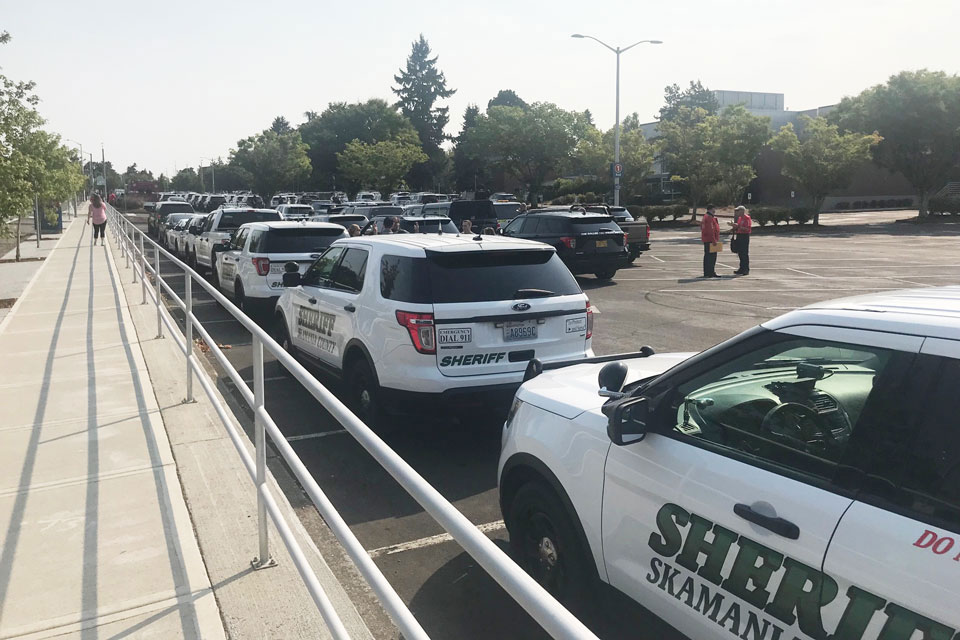 VANCOUVER, Wash. (AP) — Hundreds of law enforcement and first responder vehicles lined up at Clark College in Vancouver, Washington on Tuesday for a procession to honor Clark County Sheriff’s Detective Jeremy Brown, who was shot to death while doing surveillance work.

Brown, 46, who was promoted to honorary sergeant by Clark County Sheriff Chuck Atkins after his death, was shot July 23 while conducting surveillance on several people at an east Vancouver apartment complex.

Police SUVs, personal vehicles, fire trucks, ambulances and other vehicles from agencies throughout Washington and Oregon drove in the 11 a.m. procession north on Interstate 5, The Columbian reported.

The public memorial service started at 1 p.m. at ilani casino near La Center, Washington. People lined streets and waited on overpasses along I-5, waving flags and holding balloons.

“I have friends who are officers and they’re down right now,” said Jackie Purvis of Vancouver. “I want to show them support.”

A dedicated man of service

During his service with the sheriff’s office, Brown had worked as a corrections deputy and patrol deputy. He worked at the Washington State Department of Corrections and as a reserve officer with the Missoula County Sheriff’s Office in Montana. He had also been a military police officer in the U.S. Marine Corps.

He is survived by his wife, Jill, and five adult children, according to sheriff’s spokesman Sgt. Brent Waddell.

“His life was taken tragically, and the deep loss felt by so many defies words."

"We hope the caring and compassion in our hearts provides some comfort to those closest to him, and that the apprehension of all suspects over the weekend gives us some confidence in justice,” Vancouver Mayor Anne McEnerny-Ogle said in a statement last week.

Guillermo Raya Leon appeared Thursday in Clark County Superior Court on suspicion of aggravated first-degree murder and possession of a stolen firearm in connection with Brown’s death. Attempts to reach his lawyer were not successful.