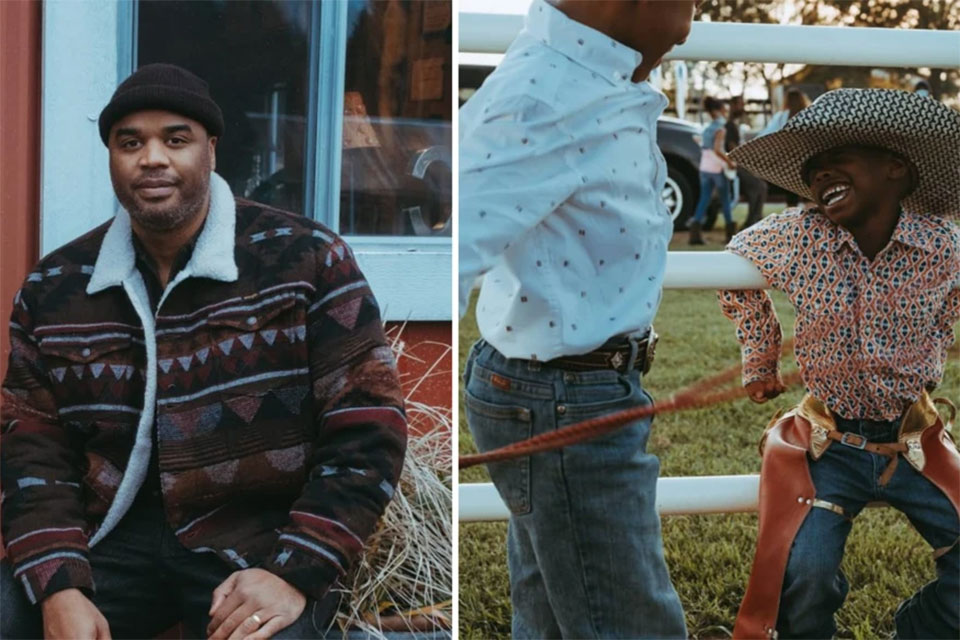 Ivan McClellan is a Portland-based photojournalist and designer and the creator of "Eight Seconds," a photography project dedicated to showcasing the culture of Black cowboys. His work has been featured in ESPN, The Undefeated, Dazed, Complex, and Because Of Them We Can, and he has no plans on slowing down anytime soon. It all started in 2015 with McClellan connected with a friend who was working on a documentary about Black cowboys. That friend invited McClellan to attend a rodeo with him, and he agreed, not knowing anything about the rich history or what he was about to get himself into.

"I went, I don't know why I did. It was just the right opportunity for me. I was in Portland, Oregon, which is a very white city, and the opportunity to go and be around Black folks just sounded really good to me," McClellan told BOTWC.

When he arrived at that rodeo in 2015 in Okmulgee, Oklahoma, the Kansas City native saw what could only be described as magical. Thousands of Black cowboys. None of them looked like the traditional ones he had previously seen in the movies.

"There were beautiful Black women with long acrylic nails and braids, barrel racing on these really muscular quarter horses, there were old men in perfectly starched white shirts with pinky rings on, there were young men with no shirt and gold chains and Jordans on riding horses, there were people doing the Cupid Shuffle. It was like this party atmosphere. It was like going to Oz for me," recalled McClellan.

That day he took a bunch of photos, mesmerized by the culture and what he was witnessing. When he got home and saw the images, he immediately hooked onto the culture and attended and photographed rodeos. To McClellan, it was like viewing a lost city of sorts. While he wasn't aware of the vast community of Black cowboys before that first rodeo, he quickly discovered just how connected they were to him, meeting many people there who were from Kansas City, where he grew up. One guy even lived less than a quarter-mile from his childhood home, just on the other side of the field, right behind McClellan's house. That man informed him that many cowboys from Kansas City travel to the rodeos for their family reunions and to celebrate.

McClellan was raised by a single mother who took care of him and his sister, struggling to make ends meet. When he turned 17, he got as far away from Kansas City as he could, avoiding the trappings of his former environment and taking up acting in New York City. Learning a different narrative about his hometown was intriguing for the now tech worker.

He surmises that his ignorance about the cowboy culture that existed all around him growing up had a lot to do with his upbringing. His grandmother was raised rurally, just two generations removed from slavery, growing up crop tending and raising animals. When the family had the opportunity to live in the city, they saw no need for things of the country, shunning it in favor of a life that had a perceived better social status. But the full circle moment has taught McClellan just how important the Black cowboys are, not only for historical record but also for a generation working to reconnect with the richness of who Black people are.

"The cowboy represents something that we've kind of lost more broadly in our culture and [the fact] that it still exists and that it's still thriving, I think it is incredibly important," said McClellan.

"I say archetype because archetype is kind of a shorthand for an entire feeling and an entire set of principles. And the cowboy represents integrity, grit, independence, and all of these noble traits that we associate with the American men. That Black people are excluded from that shorthand, I think, is really a shame and really unfair and inaccurate in a lot of ways because Black folks obviously represent those principles. So my goal is to saturate the world with these images until that archetype expands to include Black people. If I show a kid a cowboy, they immediately know what that means and the values associated with it, and I want when kids draw a cowboy for them to color it in with a brown face automatically without really thinking about it," McClellan said.

More than just a rodeo

On his Instagram page, McClellan shares hundreds of photos of Black cowboys. His goal is to one day turn his work into a comprehensive photo book that highlights the culture and its subcultures, something that can exist as an artifact. He also hopes to connect more Black cowboys with sponsorship opportunities.

"It's expensive to be a rodeo cowboy. You gotta pay for your horses and feed and travel and entry fees. A lot of Black folks that compete in rodeo don't have the money to compete at a professional level. So I've been working really hard when I work with brands... to connect [cowboys] with the sponsorship...so they can get more money, and they can start to elevate their performance," he said.

McClellan recommends that everyone attend a Black rodeo, urging anyone you can find in your nearest city but also Bill Pickett rodeos. Overall, he wants more people to get involved in the culture.

"They're more than just rodeos; it's a Black cultural event," said McClellan.