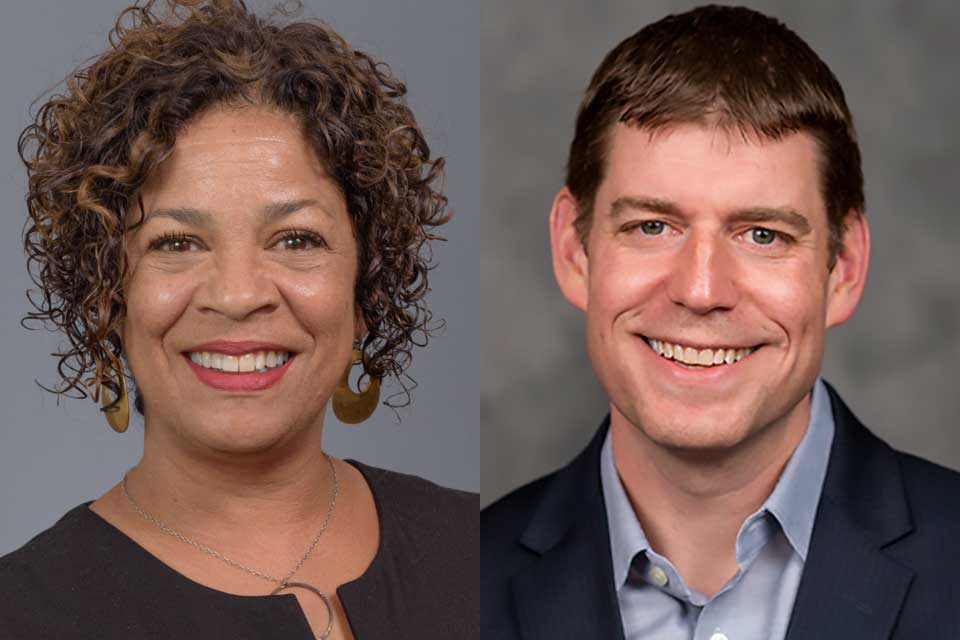 Two days after she was elected by her peers as chair of the Portland school board last week, Michelle DePass attended a retreat focused on training elected public school officials to lead with a bold, anti-racist vision.

“My whole goal as a board chair is going to be trying to get the board itself coalesced around these ideas, first to come out and say we are working towards becoming an antiracist board and be very explicit about it as a goal,” DePass told The Skanner. “And then line us up with activities or strategies to meet that goal.”

She added, “I don't expect any of my White colleagues to be versed or even have the language for this. They’re nice people, but nice people that need to be trained up in the language of anti-racism, and

"And that’s fine. So I want to do a lot of internal work. I want to lead us through a way of evaluating the superintendent.”

As a School Board Partners fellow, DePass plans to take advantage of the organization’s offer to fund her certification in educational budget finance through Georgetown University.

“Budgets are always finite resources, and you actually are going to have to put money -- even if it’s unpopular -- where there’s more need,” DePass, the community engagement and policy coordinator for the director of the Portland Housing Bureau, said. “We haven’t done that in the past. The budget is a moral document, and our values absolutely need to be reflected in the budget, and I don’t know how to do that level of analysis on a $2 billion budget to make sure that we’re actually putting more money where there’s more need.”

She said that while she’s been able to lean on colleague and recently elected vice chair Andrew Scott, the deputy chief operating officer at Metro and former director of the Portland City Budget Office, she sees the importance of being able to review a budget through her own lens.

“I think Michelle’s lived experience as a person of color in Portland is going to be so valuable to us as a board and for us as a district to have her chairing,” Scott told The Skanner. “There’s a lot of back and forth; I will bring a very sort of logical, sort of White dominant approach to an issue, and Michelle will say, ‘Well that’s great, and let’s think about it a different way.’”

Both DePass and Scott are graduates of Portland Public Schools, and both were elected to the school board in 2019.

“I’ve been in government and public service for 25 years doing public policy, and hopefully bring some of that budget and finance and sort of that expertise, but also I ran because I’m a product of Portland public schools and it served me really well, but I recognize that’s not true across the board,” Scott said.

Looking ahead at a year that is slated to be fully in-classroom, DePass said she is excited to support PPS Superintendent Guadalupe Guerrero in the district’s “audacious strategic plan” that is yet to be unveiled.

“I’m from Portland, so I can say this: We’re very polite, and don’t want to have difficult conversations.

"And addressing racism, you need to be able to say with a straight face, ‘I am a White person showing up to this space. I don’t know anything. But I’m here to learn.’ You need to kind of own who you are and be a student in this room. So I’m hoping to lead us through the conversations. We had a lot of belly button-staring this past year, and we had a lot of quarterly retreats where we evaluated ourselves, and that’s useful. Not super successful process-wise and outcomes-wise, but I think that we can coalesce around wanting to become antiracist, and it will just make us better in the work we have ahead of us. And we are going to need everybody on that board -- they don’t have to agree, but they have to get the language down.”

The current Portland school board is among the most diverse in the district’s history. Both DePass and Scott pointed out that while the pandemic stopped in-person classes, “learning loss” is a concern among parents and educators nationwide -- but one that has existed for students of color all along.

“It seems like such a crisis, but we have Black and brown kids who haven't learned how to read in the third grade,” DePass said. “About 83%. And so what’s interesting when we talk about learning loss, I’m like, who are we talking about? And who are we caring about, and whose voices are we elevating? It’s been crisis level for decades for Black kids, and now all of a sudden White kids are impacted, and it’s a national crisis.”

“One of the things the board is continuing to talk about is, how are we using this federal money that’s come in to support reopening to really go after some of those long-standing inequities?” Scott said. “As a board, we were really focused on the reading and math gaps between our white students and our Black and brown students. So as we’re focused on learning loss, what are we doing to those historical gaps that have been there a long time? Can we use this as an opportunity to close that gap, with some of that additional money?”

DePass said that as a Spanish-speaking Black person, she saw Black kids as “proxy for the kids we’re leaving behind.”

An anti-racist budget, she said “understands in a very real way that outcomes are predictive by race.

“If we’re talking about equity, equity doesn’t mean ‘equitable’ -- in other words, we’re not going to give students in wealthy schools the same as we give the students who are low-income, or students of color. Equity means making sure each one of those groups has access to what they need. In some cases, with the budget, if you have $100,000 to spend, do you send the cello club to Vienna for two weeks? Or do you spend it teaching Black third graders how to read, who have a 17% achievement rate in Portland?”

Scott explained how a more exhaustive look at student performance was central to ensuring equity in education.

“Pre-COVID, as a board, we set those goals for third grade reading and fifth grade math, and very specifically the district goals -- what we’re holding the superintendent and his team responsible for -- is seeing learning growth among the students at the lowest end of that,” he said. “Some other districts have focused on proficiency, which is of course super important. But that incentivizes the districts to look at the kids who are super close to the line for reading and math, and just get them over the line.

We wanted to make sure we were seeing learning growth across the entire spectrum.

So the goal we set for third grade reading and fifth grade math is very focused on our BIPOC students, on those learning disparities, and narrowing those across the entire spectrum.”

The look of the school district is about to change, as the district attempts to balance enrollment numbers by redrawing some boundaries.

“Anytime you redraw lines in any district, but particularly in Portland where we’re very residentially racially segregated, it causes people to get really upset,” DePass said. “Because we’re racially segregated by neighborhood, and we move a boundary for a neighborhood, we have privileged parents that come out in droves, and usually we’re hearing from people who have more proximity to power. And they’re very loud voices and they’re organized.

“Who we don’t hear from are the people whose commutes are going to be lengthened, who are lower-income, who don’t speak English. Typically in these large discussions, we’re not hearing from those people as readily.”

Meanwhile a $1.2 billion bond approved by voters last November will direct funding to a modernization of Jefferson High School Middle College for Advanced Studies, which has the

largest Black student population in the state, as well as the establishment of the Center for Black Student Excellence.

“We don’t have a community process written down yet for that, but there will be the conversations around, what does this look like?” DePass said. “Is it a scattered site? Is it a building? Is it a concept?

"And so we have about $60 million in the bond to start those conversations.”

“The public support for the bond that passed last November was so strong and it’s so exciting to be able to rebuild Jefferson, to be able to create this Center for Black Student Excellence, and can we pick up on some of that synergy with Albina Vision Trust, and what’s going to happen with Harriet Tubman and the I-5 expansion?” Scott said.“ It feels like there’s a long-term opportunity there, that even as we’re dealing with these short-term issues, we can’t lose sight of that. I think there’s going to be a lot of exciting groundwork laid.”