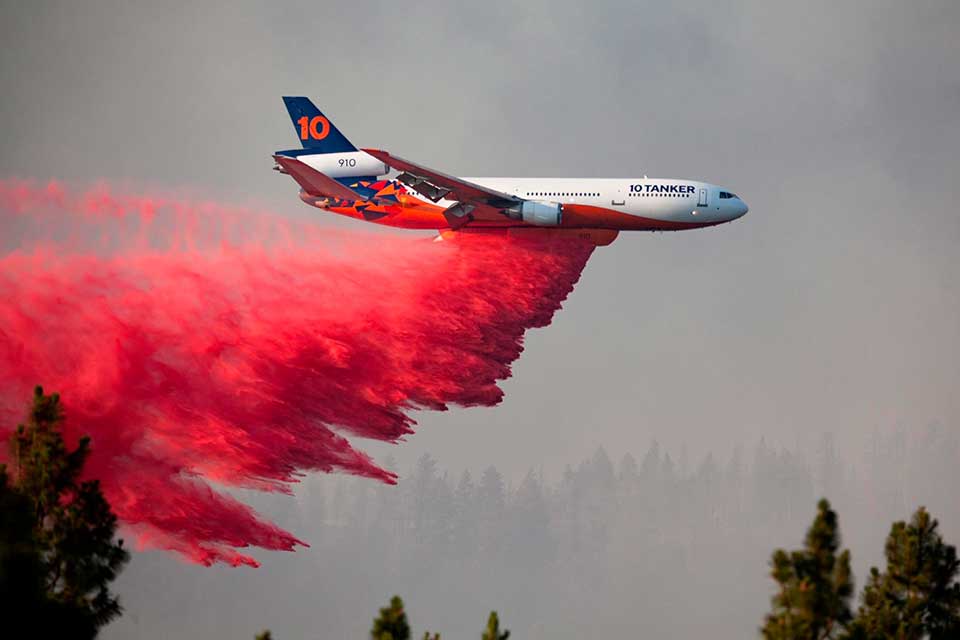 PORTLAND, Ore. (AP) — The threat of thunderstorms and lightning has prompted officials in fire-ravaged Oregon to ask for help from outside the Pacific Northwest to prepare for additional blazes as many resources are already devoted to a massive forest fire.

The 569-square-mile (1,474 square kilometers) Bootleg Fire is burning 300 miles (483 kilometers) southeast of Portland in and around the Fremont-Winema National Forest, a vast expanse of old-growth forest, lakes and wildlife refuges. Evacuations and property losses have been minimal compared with much smaller blazes in densely populated areas of California.

But eyeing how the Bootleg Fire — fueled by extreme weather — keeps growing by miles each day, officials with the Rogue River-Siskiyou National Forest in southwest Oregon are asking for more outside crews to be ready should there be a surge in fire activity there. 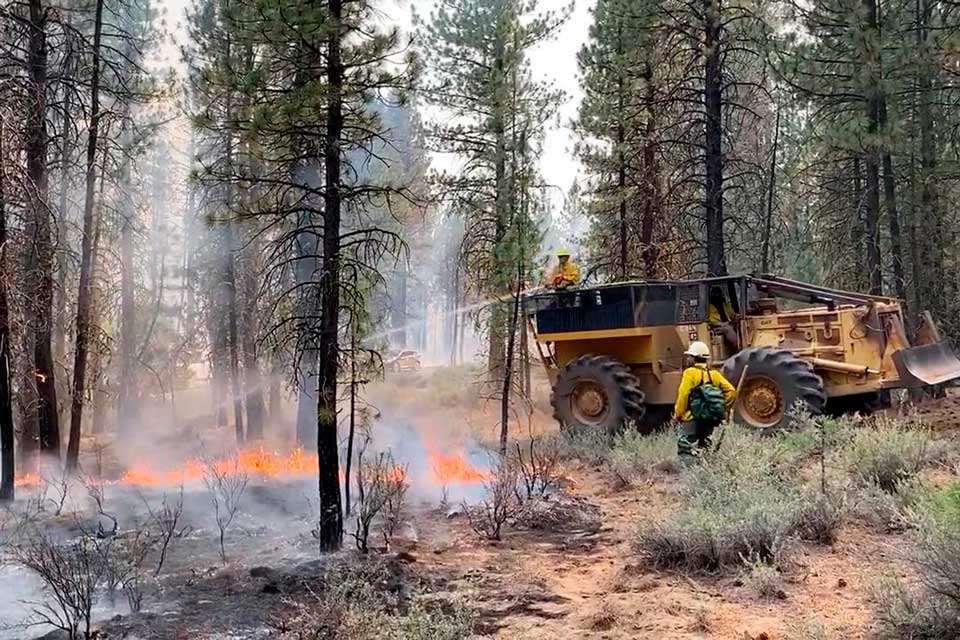 In this photo provided by the Bootleg Fire Incident Command, firefighters battle the Bootleg Fire in southern Oregon, Saturday, July 17, 2021. Meteorologists predicted critically dangerous fire weather through at least Monday with lightning possible in both California and southern Oregon. (J. Michael Johnson/Bootleg Fire Incident Command via AP)“Although the lightning activity predicted for early this week is expected to occur east of us, we are prepared for the worst, and hoping for the best,” Mike McCann, an assistant fire staff, said Monday in a statement released by the national forest.

The worry is that dry conditions, a drought and the recent record-breaking heat wave in the region have created tinderbox conditions, so resources like fire engines are being recruited from places like Arkansas, Nevada and Alaska.

Meanwhile, to the east, the Bootleg Fire's jaw-dropping size contrasted with its relatively small impact on people underscores the vastness of the American West and offers a reminder that Oregon, which is larger than Britain, is still a largely rural state, despite being known mostly for its largest city, Portland.

If the fire were in densely populated parts of California, “it would have destroyed thousands of homes by now,” said James Johnston, a researcher with Oregon State University's College of Forestry who studies historical wildfires. “But it is burning in one of the more remote areas of the lower 48 states. It's not the Bay Area out there.”

At least 2,000 homes have been evacuated at some point during the fire and another 5,000 threatened. At least 70 homes and more than 100 outbuildings have gone up in flames. Thick smoke chokes the area where residents and wildlife alike have already been dealing with months of drought and extreme heat. No one has died.

Pushed by strong winds from the southwest, the fire is spreading rapidly to the north and east, advancing toward an area that's increasingly remote. 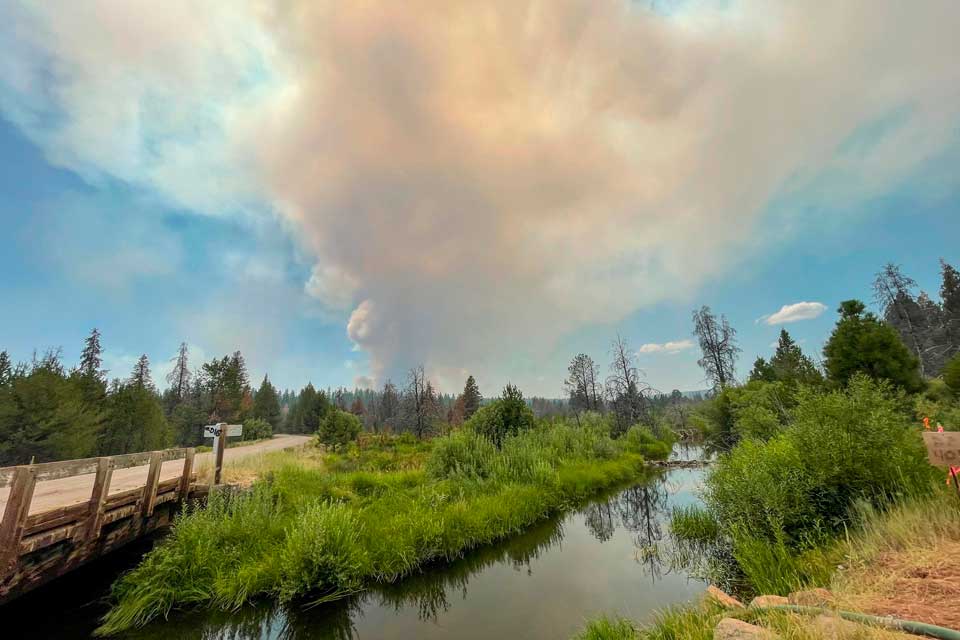 In this photo provided by the Bootleg Fire Incident Command, the Bootleg Fire burns in the background behind the Sycan Marsh in southern Oregon on Saturday, July 17, 2021. The destructive Bootleg Fire, one of the largest in modern Oregon history, has already burned more than 476 square miles (1,210 square kilometers), an area about the size of Los Angeles. (Bootleg Fire Incident Command via AP)Evacuation orders on the fire's southern edge, closer to more populous areas like Klamath Falls and Bly, have been lifted or relaxed as crews gain control. Now it's small, unincorporated communities like Paisley and Long Creek — both with fewer than 250 people — and scattered homesteads that are in the crosshairs.

But as big as the Bootleg Fire is, it's not the biggest Oregon has seen. The fire's size so far puts it fourth on the list of the state's largest blazes in modern times, including rangeland fires, and second on the list of infernos specifically burning in forest.

These megafires usually burn until the late fall or even early winter, when rain finally puts them out.

The largest forest fire in modern history was the Biscuit Fire, which torched nearly 780 square miles (2,000 square kilometers) in 2002 in the Rogue River–Siskiyou National Forest in southern Oregon and Northern California. 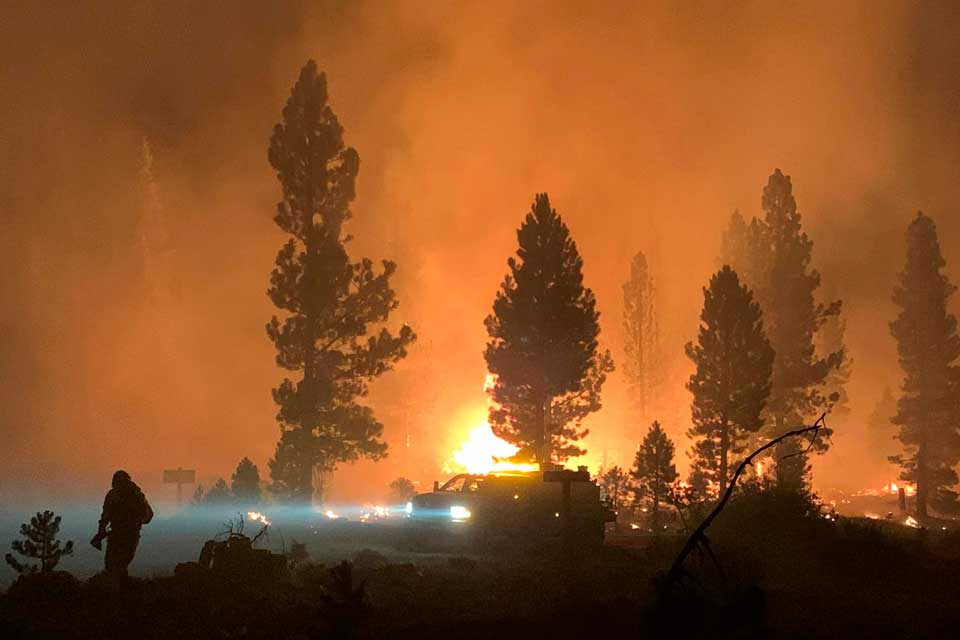 On Monday, flames forced the evacuation of a wildlife research station as firefighters had to retreat for the ninth consecutive day due to erratic and dangerous fire behavior. Sycan Marsh hosts thousands of migrating and nesting birds and is a key research station on wetland restoration in the upper reaches of the Klamath Basin.

The Bootleg Fire was one of many fires burning in a dozen states, most of them in the U.S. West. Sixteen large uncontained fires burned in Oregon and Washington state alone on Monday.

Extremely dry conditions and heat waves tied to climate change have made wildfires harder to fight. Climate change has made the West much warmer and drier in the past 30 years and will continue to make weather more extreme and wildfires more frequent and destructive.

And in Northern California, authorities expanded evacuations on the Tamarack Fire in Alpine County in the Sierra Nevada to include the mountain town of Mesa Vista. That fire, which exploded over the weekend was 61 square miles (158 square kilometers) with no containment.

On the western side of the Sierra, the Dixie Fire has scorched 63 square miles (163 square kilometers), threatening tiny communities in the Feather River Valley region.

Meteorologist Julia Ruthford told a briefing that a surge of monsoonal moisture from the U.S. Southwest increased atmospheric instability Sunday and Monday, creating plumes topping 30,000 feet (9,144 meters) — so big that the fire generated a thunderstorm over itself, hurling lightning bolts and whipping up gusty winds.

The moisture and instability was tapering off but dryness was returning and conditions were expected to remain critical despite the slight moderation, she said.

“We’re kind of trading one weather concern for another,” she said.