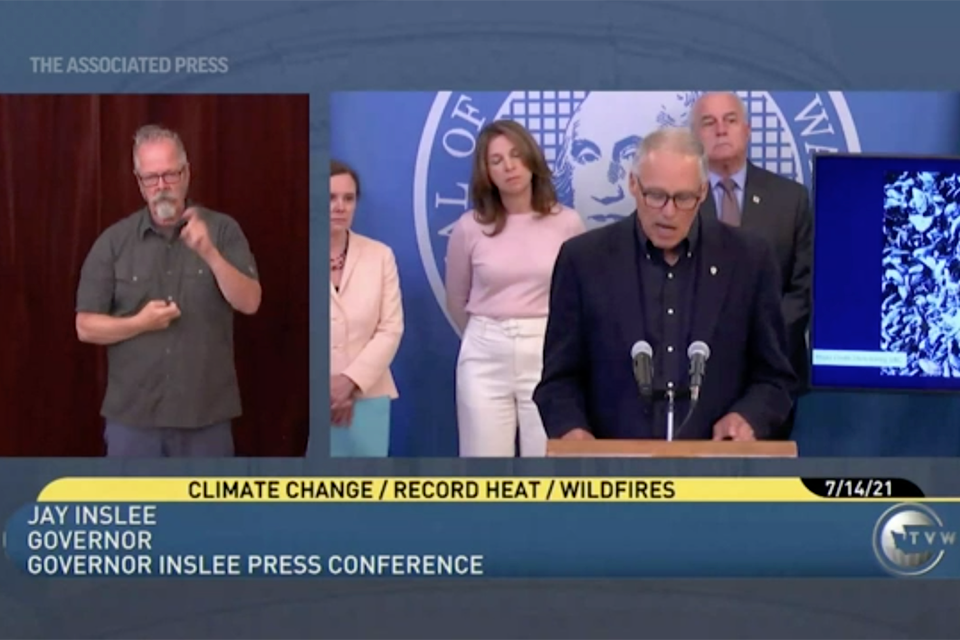 Citing recent record temperature that killed at least 91 people in the state, increased wildfire activity and drought, Inslee called it “the summer of climate change.”

“This is not political hyperbole,”

Inslee said. “It is a scientific consensus that is jarring the life of every Washingtonian in some way.”

When can a drought be declared?

A drought emergency declaration is issued when water supply is projected to be below 75% of average, and poses a hardship to water users and the environment. The declaration allows expedited emergency water right permitting and allows the state to aid state agriculture, protect public water supplies and boost stream flows to safeguard fish.

The cities of Seattle, Tacoma and Everett areas are not included in the drought declaration, with the governor's office saying that those areas have enough water storage to get through the summer. The Department of Ecology said that drinking water supplies are holding up, but that the Department of Health is monitoring closely.

Laura Watson, director of the state Department of Ecology, said that the drought came as a surprise to many of them because of robust snowpack in the Cascade Mountains.

“That led us to believe the water supplies would be adequate,” she said but said that the second driest spring since 1895 plus June's record-shattering heat wave changed all that. “This is a grim reminder that water supplies do face an increasingly uncertain future because of climate change.”

Last week, Inslee declared a state of emergency throughout Washington relating to the growing risk of wildfires, including a statewide prohibition on most outdoor and agricultural burning through Sept. 30.

This summer’s fire season is “likely to be the worst of the last five years,” said Commissioner of Public Lands Hilary Franz. She implored the public to abide by the burn bans.

She said that statewide, there have already been more than 900 fires with an estimated 219 square miles (567 square kilometers) burned, just shy of the total land burned in all of 2019.

“If our new normal brings months without a drop of rain and one extreme heat wave after another, there's no technology or amount of resources that will be able to match the on-the-ground reality our firefighters are facing,” she said.

Scientists have long warned that the weather will get wilder as the world warms. Climate change has made the West much warmer and drier in the past 30 years. But special calculations are needed to determine how much global warming is to blame, if at all, for a single extreme weather event.

Nearly 60% of the U.S. West is considered in exceptional or extreme drought, the two highest categories, according to the University of Nebraska’s Drought Monitor. That’s the highest percentage in the 20 years the drought monitor has been keeping track. Less than 1% of the West is not in drought or considered abnormally dry, also a record.

More than 95% of Washington is either abnormally dry or in official drought with 52.7% of the state being in severe, extreme or exceptional drought, according to the U.S. Drought monitor.

Rain and snow in Washington from April to June was third-lowest in 127 years of recordkeeping with only 3.7 inches (9.4 centimeters), according to the National Oceanic and Atmospheric Administration.

Both NOAA and NASA show soil moisture levels down to some of the lowest recorded levels for much of the West. Most of California, Oregon, Washington, Nevada, Arizona, Utah and Idaho are drier than in 99% of other years.