A year-long project for six emerging African American performance artists in King County is about to hit the stage.
The Creation Project Showcase is a culmination of a year of new works and professional development programs for African American performing artists based in King County. Created by The CD Forum for Arts & Ideas, this is the debut of the first Creation Project Showcase and will run at 8 p.m., Friday, May 16 and Saturday, May 17 at the Broadway Performance Hall, 1625 Broadway St.
Immediately following the performances both nights, there will be a CD Forum Session — a question-and-answer session with audience.
The project came about after the program director, Denee McCloud, kept receiving calls and questions from local artists on how to package themselves. Artists kept telling her that Seattle is a great place to create but not such a great place to be heard.
"The audience can expect to see what's coming next in local talent that's coming out of Seattle and King County," said Stephanie Ellis-Smith, founder and executive director of the CD Forum. "It's pretty exciting, these are people who have been working on pieces for this past year. People who push the envelope, who are putting themselves out there."
Ellis-Smith said even though it's a pilot program, they hope to continue the program next year.
With funding provided by the National Endowment of the Arts, the goals of The Creation Project are to support the creation of new work for Seattle's African American performing artists in the formative stages of their careers; use the artistic process as the platform for learning critical professional development skills and to support distinctive local African American artistic voices. 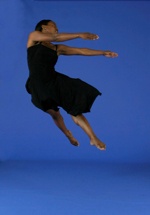 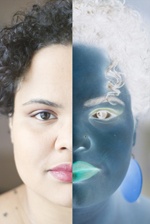 Amber Flame [pictured on the right]: "Binary" (spoken word/theatre); and Rachel Ferguson: "The Oh My God-It's So True Story of Halle Berry" (theatre).
The artists, all representing different ranges of artistic performing arts disciplines, were chosen by a local panel of professional artists and administrators familiar with the arts. Participants received a $1,000 stipend and in June of last year began attending professional development seminars that taught artists how to present and package themselves professional artists; marketing; work with presenters; peer discussions; copy writing issues and grant writing workshops.
"I really, really love the mission of the project which is to give voice to African American performing artists," Bell said. "I had never seen an opportunity specifically geared to African American performing artists. There's a lot of stuff around theatre, music or fine arts, but this was a very intriguing concept for me."
Bell, a feminist artist, is a poet, performance artist and cultural activist and is the 2006 Seattle Grand Slam Champion. Bell placed third in the Individual Competition at the National Poetry Slam in New Mexico and has headlined her first international spoken-word tour where she performed at over 80 venues across North America.
Bell started off as a slam poet doing spoken word. "CoochieMagik" (suitable for those 15 and older) is a story of the artist growing into her sexuality, and it evolved out of spoken word she was doing about women's issues with their bodies and they way they are perceived in society.
"A few years ago I was doing a lot of response work," Bell said. "Responding the depictions of particularly African American women in hip-hop culture and in mass media in general. I just got tired of responding to it. I wanted to create something that was more empowering and that was more about women and so 'CoochieMagik' came out of that and has evolved in poems, monologues and music."
Ferguson's play she wrote and directed, "The Oh My God — It's So True Story of Halle Berry," is about a muse by the name of Halle Berry and her father, Zeus, against whom she rebels. Ferguson said she initially got the idea about four years ago after reading a Bust Magazine article on Pam Grier, who wanted Halle Berry to portray her likeness in an autobiographical movie.
Ferguson, an actress and playwright originally from Pasadena, Calif., got a degree in playwriting and directing in 2004 at the Cornish College of the Arts.
"For me having the seminars was so helpful, not only in the aspect of learning all these things but I'm networking with all these different types of people and different types of artists who are also attending these seminars," Ferguson said. "It was amazing, I would come and crash the seminars again … I loved it so much."
Tickets to the performance are $15 for general admission, $10 for CD Forum members, students and seniors. Advance sales are through Brown Paper Tickets at www.brownpapertickets.com or by calling 800-838-3006.
For more information, visit www.cdforum.org.