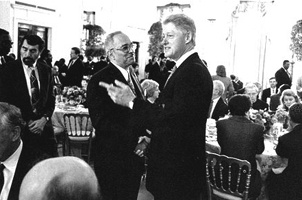 Well, that sounded good last year, but over the past two months, the actions and words of Hillary Clinton have gone from being merely disappointing to downright disgusting.  I guess the debate last week was the final straw.
I've watched Senator Clinton and her husband play this game of appealing to the worst side of white people, but last Wednesday, when she hurled the name "Farrakhan" out of nowhere, well that's when the silly season came to an early end for me. She said the "F" word to scare white people, pure and simple.
Finally, I want to say a word about the basic decency I have seen in Mr. Obama.  Mrs. Clinton continues to throw the Rev. Wright up in his face as part of her mission to keep stoking the fears of White America. Every time she does this I shout at the TV, "Say it, Obama! Say that when she and her husband were having marital difficulties regarding Monica Lewinsky, who did she and Bill bring to the White House for 'spiritual counseling?' ............ THE REVEREND JEREMIAH WRIGHT!"