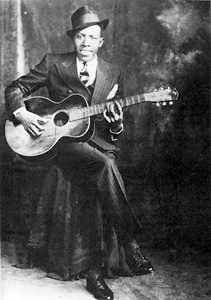 Seventy years after his death, Robert Johnson (l, circa 1935) is still considered "King of the Delta Blues." By others, Robert Johnson is considered to be the "Grand-father of "Rock-and-Roll." Younger and younger audiences are discovering the artistic merits of Johnson's blues lyrics and guitar. 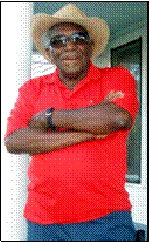 It is still amazing that with all of the national and international accolades received by Robert Johnson, few people know that the son of Robert Johnson, Claud Johnson (pictured right), and his family reside in Crystal Springs, Mississippi. With quiet resolve, this resilient family is making a substantial difference in their community. While their lack of notoriety is about to change because of a soon to be released film by HBO, the commitment of the Johnson family to making a difference will not. 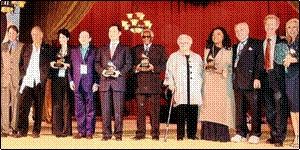 The Foundation has also launched an entrepreneurship program. The Entrepreneur Class is an engaging teacher facilitated program designed to improve students' academic skills, business and life skills. Through participation in this program attendees gain an understanding of the free enterprise system, improve the quality of their lives and learn to dream about the possibilities. The Entrepreneur Class also fosters collaboration, teamwork, patience, positive risk taking and sound planning skills. It offers youth the opportunity to dream and grow. Each graduate of the program receives a $500 scholarship upon completion. The Robert Johnson Blues Foundation also keeps the dream alive through its other awards programs, the New Generation Award, the Robert Johnson Blues Foundation Hall of Fame, and The Robert Johnson Blues Foundation Scholarship Award given yearly to college bound high school graduates.

"Honeyboy" Edwards was born June 28, 1915 in Shaw, Mississippi. He is the last living Blues artist to play with Robert Johnson. Mr. Edwards received a 2008 Grammy for Best Traditional Blues Album, "Last of the Great Mississippi Delta Bluesmen: Live in Dallas!"
There are many stories as to what happened to Robert Johnson from 1930 – 1931. Some say he sold his soul to the devil while others believe that he went to Hazlehurst to look for his father. Most however, agree that the second honoree, Ike Zinnerman had a profound affect on helping Robert Johnson hone his skills on the guitar. Mr. Zinnerman's award will be presented posthumously. This great bluesman shared his knowledge of the guitar with Robert Johnson from 1930 – 1931.