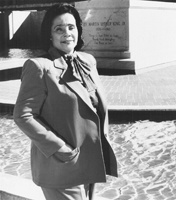 LITHONIA, Ga.—President George Bush, leading the nation in celebrating the life of Coretta Scott King, praised the civil rights leader for enduring extraordinary pain and loss to give generations of people "a better, more welcoming country."


"We knew Mrs. King in all the seasons, and there was grace and beauty in every season," Bush said at a New Birth Missionary Baptist Church service Tuesday that was attended by four presidents and a crowd of thousands.
"As a great movement of history took shape," Bush said, "her dignity was a daily rebuke to the pettiness and cruelty of segregation."


Bush noted that Mrs. King and the Rev. Martin Luther King Jr., her husband who was assassinated nearly 40 years ago, confronted vicious taunts, threatening phone calls and even the bombing of their home because of their early work for equal rights for Blacks. Even after her husband's slaying and in the years since, she never gave up, he said.


"Coretta had every right to count the costs and step back from the struggle," the president said. "But she decided that her children needed more than a safe home — they needed an America that upheld their equality and wrote their rights into law. And because this young mother and father were not intimidated, millions of children they would never meet are now living in a better more welcoming country."


The funeral took on political overtones as former President Jimmy Carter said of the Kings: "It was difficult for them then personally with the civil liberties of both husband and wife violated as they became the target of secret government wiretaps." Later, he said that Hurricane Katrina showed that all are not yet equal in America.


And both Bush and his father winced as they sat behind the pulpit and heard the Rev. Joseph Lowery, who co-founded the Southern Christian Leadership Conference with Martin Luther King Jr., take several jabs at foreign and domestic policies.


"We know there were no weapons of mass destruction over there, but Coretta knew and we knew there are weapons of misdirection right down here," Lowery said, complaining that were far too many in the United States are living in poverty and without health care insurance.


"For war, billions more, but no more for the poor," Lowery continued, a take-off of a lyric from the song "A Time to Love" which drew a roaring standing ovation.


Bush's father tried to defuse any political tension by joking that Lowery used to challenge him when he was president, too.


The audience showed where its allegiance lay when former President Bill Clinton and his wife, Sen. Hillary Rodham Clinton, came to the podium to wild cheers and a long-standing ovation. He opened by saying that he was honored to be with the other former presidents. Someone in the crowd yelled out, "Future president!" in reference to his wife's possible 2008 bid.


"We can honor Dr. King's sacrifice," Bill Clinton said. "We can help his children fulfill their legacy. ... Every one of us are in a way the children of Martin Luther and Coretta Scott King."


Thousands of mourners joined family members and celebrities at Ebenezer Baptist Church in Atlanta on Monday to pay their respects to King.


People lined up for blocks outside the church's historic sanctuary, waiting for hours in freezing rain.


Across the street, at least 1,000 people filled the church's newer facility for a musical tribute featuring Gladys Knight.
Mary Howard-Hamilton, a college professor from Bloomington, Ind., drove eight hours to Atlanta and then stood in the rain for five more to be among the first to view King's body at the church.


"It's almost like the torch was passed when I walked past her," said Howard-Hamilton, 51. "I felt empowered. I'm gonna step up now. This fight's not over."


Kingwas lying in honor at the church where her husband shared his dream from the pulpit in the 1960s.


Inside the silent sanctuary, mourners filed slowly past the casket, some lingering a moment before moving on. A shroud of flowers blanketed the lower half of the casket, and wreaths stood on either side, decorated with roses, King's favorite flower.


At least 6,000 adults and children passed through the sanctuary in the first three hours, officials said.


During the weekend, some 42,000 mourners had walked past King's open casket at the state Capitol, where she became the first woman and the first Black person to lie in honor there. It was a striking contrast to the official snub her slain husband had been given by then-Gov. Lester Maddox, an outspoken segregationist.


King suffered a stroke and heart attack last year and had been diagnosed with cancer, but she appeared to be making steps toward recovery, her children said Sunday.


She was to begin treatment at an alternative medical clinic in Mexico the day she died.


"It came as a tremendous shock to us. We had no idea," eldest daughter Yolanda King said at a news conference. "She was walking with a cane, she was speaking more words ... there was clearly progress happening."


Yolanda King said family members had thoroughly researched the clinic and "were stunned when we found out there were problems and challenges there." Mexican authorities shut down the clinic days after King's death, saying it had carried out unproven treatments and unauthorized surgeries.


"We're missing her like crazy, but we're just so thankful that we had her as long as we did," Yolanda King said. "She's been released and we feel so strongly that she has reconnected with our father."