At 35, Felix Makes a Comeback and Lands Her 5th Olympics 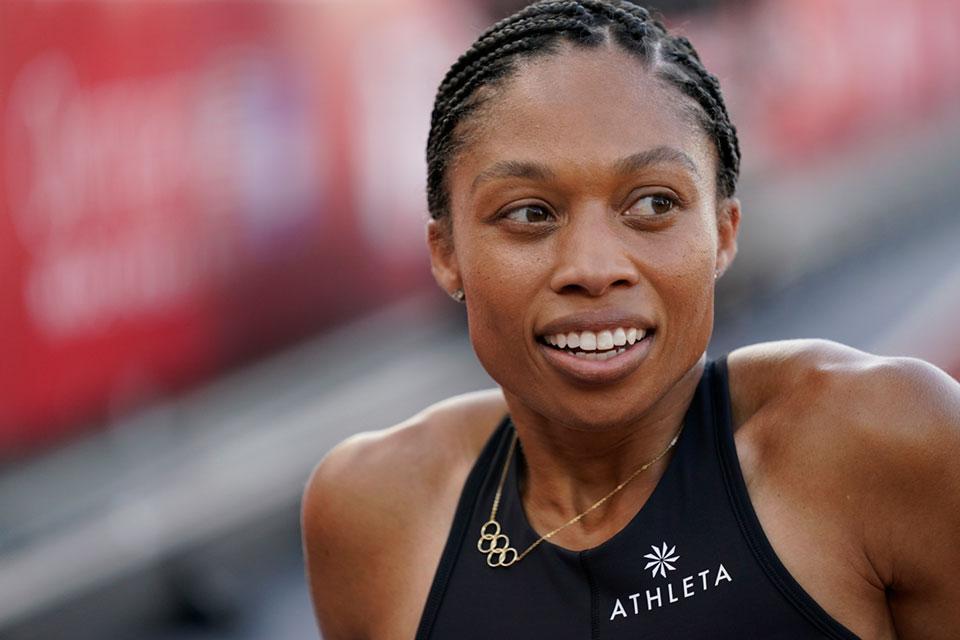 EUGENE, Ore. (AP) — Flat on her back, gasping for breath, Allyson Felix kept her eyes on the scoreboard.

When her name came up in the second spot in the 400 meters, she kicked up her heels and covered her face with her hands.

No doubt, this fifth trip to the Olympics is her sweetest. 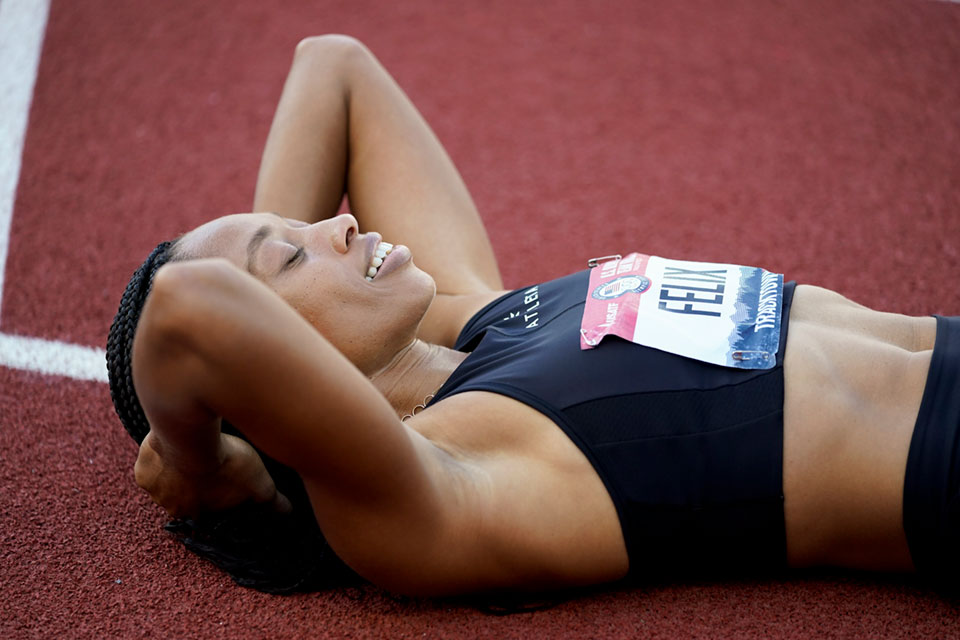 The 35-year-old mom rallied from fifth at the start of the homestretch to the second-place finish at U.S. track trials. It earned her the chance to win a 10th Olympic medal and break a tie with Jamaica's Merlene Ottey as the most decorated female track athlete in the history of the games.

“I'm just proud of making it to this moment,” Felix said after Sunday's race. “There's so much that's gone into this. Many times, I wasn't sure if it was possible."

"I'm just proud of fighting and making a way somehow.”

Running from outside her usual comfort zone, in Lane 8, Felix got off to a fast start and led 100 meters in. Slowly, she lost the lead, lost her grip on the third spot and was fighting just to stay close. But in a closing burst that will likely go down as one her her best, she reeled in half the field. 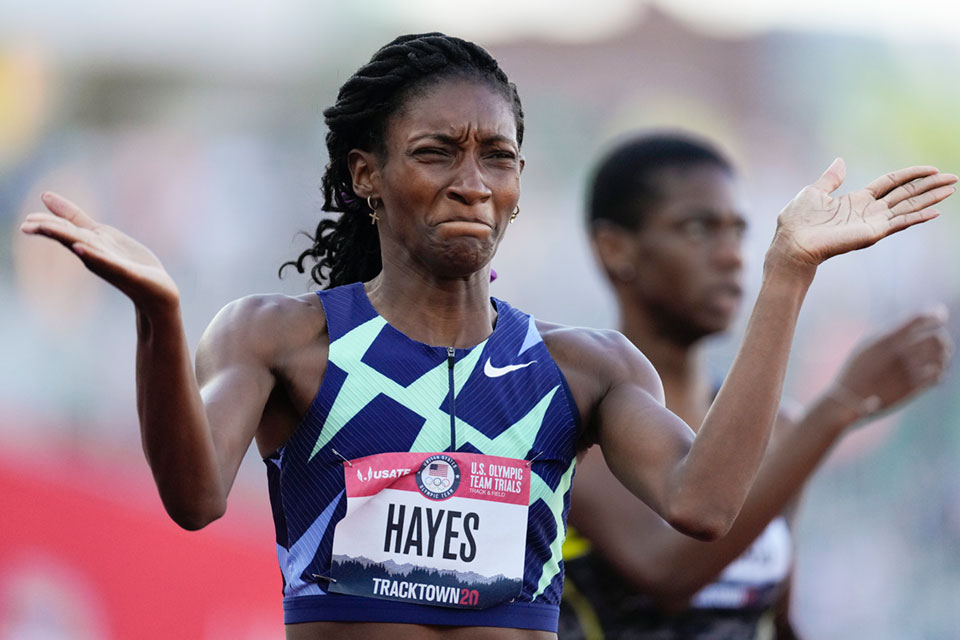 “I knew one thing was for sure. I was going to go down fighting to the line”

Sunday wasn't all great for the 30-something crowd.

In a jam-packed 100 men's final, 39-year-old Justin Gatlin pulled up lame about halfway through the race and finished last. The former Olympic and world champion is entered in the 200, as well, but this could signal the end of an era.

The new era belongs to Trayvon Bromell, Ronnie Baker and Fred Kerley, who finished in the top three spots, also leaving Noah Lyles out of the mix (but still the favorite in the 200).

Defending Olympic champion Brianna McNeal finished second, but her trip is contingent on her winning an appeal on a doping conviction related to missed tests. She's banned for five years, but was allowed to race while waiting on the appeal. Fourth-place finisher Gabbi Cunningham could get her spot.

“I can celebrate this,” McNeal said. “I’m just happy I was able to have the opportunity to compete here. I just thank God for that. ... I'm just going to take it day by day.” 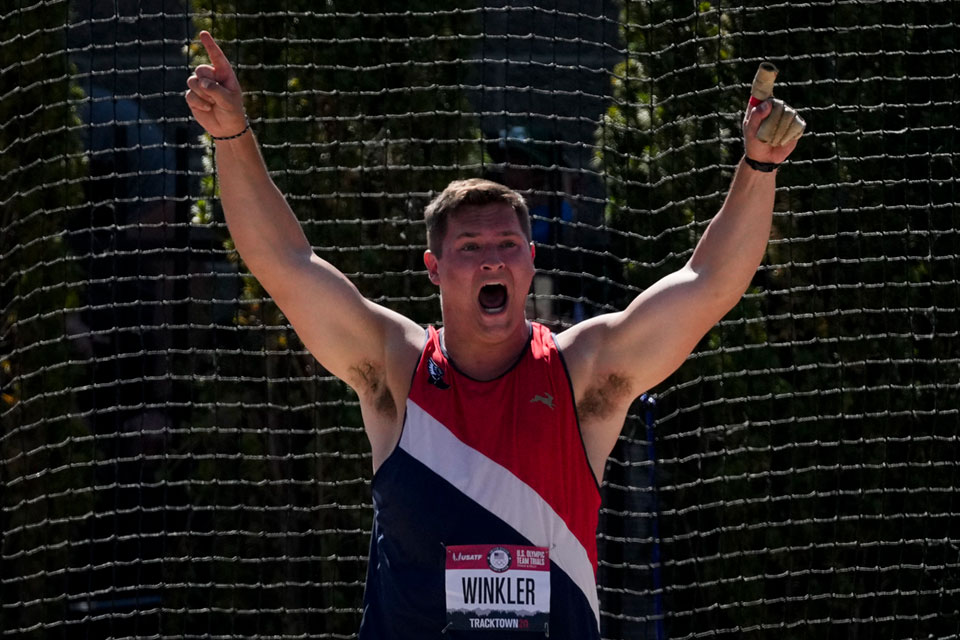 Rudy Winkler reacts after setting an American record during the finals of the men's hammer throw event at the U.S. Olympic Track and Field Trials Sunday, June 20, 2021, in Eugene, Ore. (AP Photo/Ashley Landis)

All will be in Tokyo five weeks from now.

Getting back on track

The road there for Felix has been filled with more twists and turns than she might’ve imagined two decades ago when she burst onto the scene as America’s fresh-faced sprint star.

They included the difficult birth of her now-2-year-old daughter, Camryn, who spent time in the neonatal intensive-care unit after she was born; and a very pronounced move into advocacy for female athletes in her sport, many of whom had been left on the sideline by sponsors when they became pregnant.

The COVID-19 pandemic put an even tougher spin on things, costing Felix a year at a time in her career when every day counts. To make the most of the time, Felix found herself waiting outside her house for coach Bobby Kersee to measure out distances on the street so she could train while tracks and gyms were closed.

“My first year back was a struggle, and I just kept getting hit with thing after thing,”

Felix said. “There was the sponsorship battle, and I was just ‘Man, I hope something comes together for me.’ I just kept fighting. I wanted to give it one more shot.” 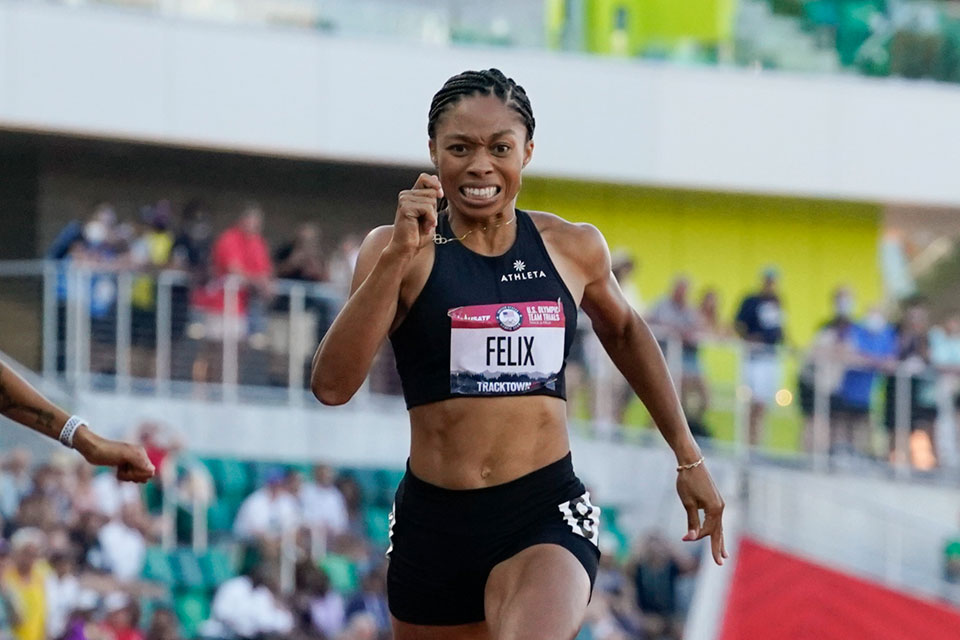 What made Sunday night even sweeter was that she got to celebrate with Hayes, who brought her 2-year-old son, Demetrius, onto the track and introduced him to one of the greatest sprinters ever.

“I was just thanking her for being who she is and never giving up,” Hayes said, while playing with her kid in the post-race Zoom interview. “Just paying homage to her, and honestly telling her ‘thank you.’ To go through this with her, as a mom, makes it more special.”

And so, in a way, Father's Day at Hayward Field felt more like Mother's Day.

Hard to imagine anyone on the track had a problem with that.

“When they watch and see me, I hope they see it's possible,” Felix said when asked what her message to moms was on one of her best days ever. “We're going to keep fighting.”