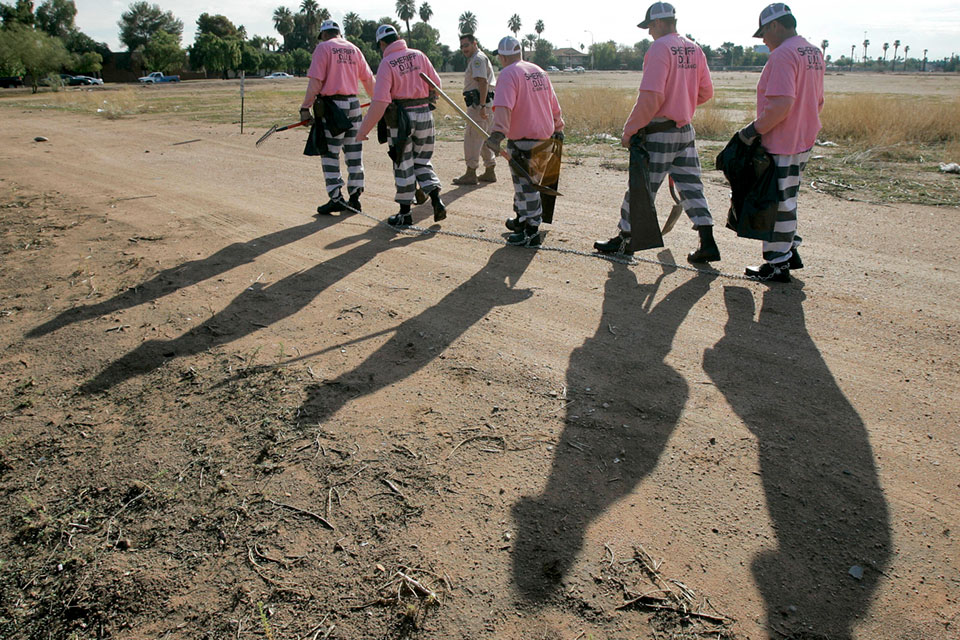 As the nation this week made Juneteenth a federal holiday, honoring when the last enslaved Black people learned they were free, lawmakers are reviving calls to end a loophole in the Constitution that allowed another form of slavery — forced labor for convicted felons — to thrive.

Oregon Sen. Jeff Merkley and Georgia Rep. Nikema Williams told The Associated Press they will reintroduce legislation to revise the 13th Amendment, which bans enslavement or involuntary servitude except as a form of criminal punishment. That exception, which has been recognized since 1865, has led to the common practice of forced labor by felons.

Social justice advocates say it created generations of Black families touched by mass incarceration and poverty and that the ramifications are still being felt today. Juneteenth seemed like the appropriate time to address this “huge piece of systemic racism in the middle of our Constitution,” Merkley said.

“At the moment that we are celebrating, if you will, the 13th Amendment and the end of slavery and its eventual announcement ..."

"We should at the same time recognize that the 13th Amendment was flawed,”

Merkley said. “It enabled states to arrest people for any reason, convict them and put them back into slavery.” 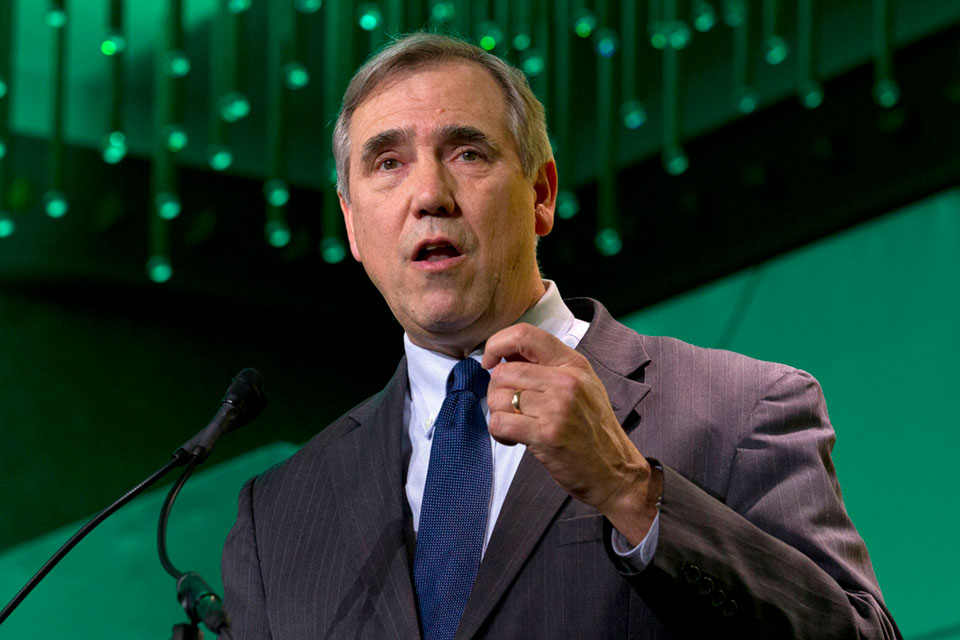 FILE - In this Jan. 24, 2019 file photo, Sen. Jeff Merkley, D-Ore., speaks during the U.S. Conference of Mayors meeting in Washington. As the nation on Thursday, June 17, 2021 officially made Juneteenth a federal holiday, honoring when the last enslaved Black people learned they were free, lawmakers are reviving calls to end a loophole in the Constitution that has allowed another form of slavery to thrive. (AP Photo/Jose Luis Magana, File)

The amendment's loophole for criminal punishment encouraged former Confederate states, after the Civil War, to devise ways to maintain the dynamics of slavery. They used restrictive measures known as the “black codes,” laws targeting Black people for benign interactions from talking too loudly to not yielding on the sidewalk. Those targeted would end up in custody for these minor actions, and would effectively be enslaved again.

The so-called “abolition amendment” was introduced as a joint resolution in December. Mostly supported by Democrats in both the House and Senate, it failed to gain traction before the session's end. Merkley said,

"The hope this time around, it is to ignite a national movement."

The issue is important to Williams, a Black woman who grew up in the South. She hopes this legislation won't be viewed through the prism of money and what the loss of prison labor would mean. Instead, she says, the history of the prison system and its relationship to people of color must be viewed in a “people-centered way."

“Our people have already been in chains and enslaved because of money,”

Williams said. “We have to make sure that we are truly moving forward and not using money as a crutch of why we’re continuing to perpetuate sins of our nation’s founding and our nation’s history.” 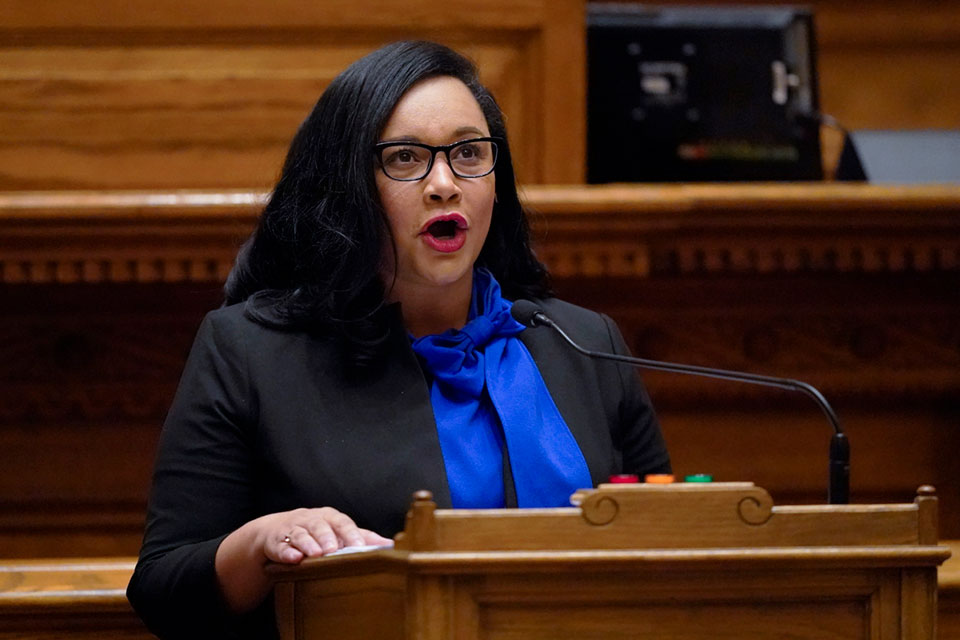 FILE - In this Monday, Dec. 14, 2020 file photo, Congresswoman-Elect Nikema Williams speaks before members of Georgia's Electoral College cast their votes at the state Capitol in Atlanta. As the nation on Thursday, June 17, 2021 officially made Juneteenth a federal holiday, honoring when the last enslaved Black people learned they were free, lawmakers are reviving calls to end a loophole in the Constitution that has allowed another form of slavery to thrive. (AP Photo/John Bazemore, Pool, File)

One group that has long been part of the movement is Worth Rises, a criminal justice advocacy group helping with the legislation's rollout. The amendment's clause has significant repercussions today, says Bianca Tylek, Worth Rises' executive director. Incarcerated workers make at most pennies on the dollar for their contributions, she says, and they lack recourse if they get hurt working or have to work when sick.

“We’re talking about people who can be beaten for not working. People can be denied calls and visits, contact with their family,” Tylek said. “People can be put into solitary confinement. People can take hits on their long-term record.”

Jorge Renaud, national criminal justice director for LatinoJustice and a parolee, said those punishments happened to him when he couldn't get through some jobs. He spent much of his 27 years in Texas state prisons doing hard labor like picking cotton, chopping down trees and grading roads. Texas does not pay jailed workers.

For Renaud, 64, what was worse than no pay was not having much sense of self-worth.

“It’s not just the choice to work. It’s the choice to do anything,” he said. “We live in a country that prides itself on individuality.

It’s impressed upon you over and over again that you are worthless and you belong to the state.”

Preparing for the free world

Advocates of the bill note that it targets forced labor and not prison work programs, which are voluntary.

“What we’re saying," Tylek said, “is the value of that work must be demonstrated and people must not be forced to work against their will.”

In Renaud's experience, prison labor was also something often done without racial equity. White incarcerated workers often were assigned less labor-intensive tasks like running the prison library or refurbishing computers. But their Black and Latino counterparts got kitchen and laundry duty. He noticed a similar trend when he gave some legislators a tour of a prison unit three years ago.

“The jobs that might prepare you for something out in the free world or are technology based ... are still reserved for whites," Renaud said.

More than 20 states still include similar clauses involving human bondage or prison labor in their own governing documents, which date to the 19th century abolition of slavery. Nebraska and Utah, which are represented by GOP senators, were two of the first to amend their constitutions for the very same issue last year through voter-approved initiatives. Only Colorado came earlier, removing such language through a ballot measure in 2018.

Merkley is optimistic that his Republican colleagues will ultimately support the legislation.

“Nothing about this should be partisan,” Merkley said.

“I think every American should be about ending slavery in our Constitution.”

Williams, too, does not want this to be painted as a partisan issue. 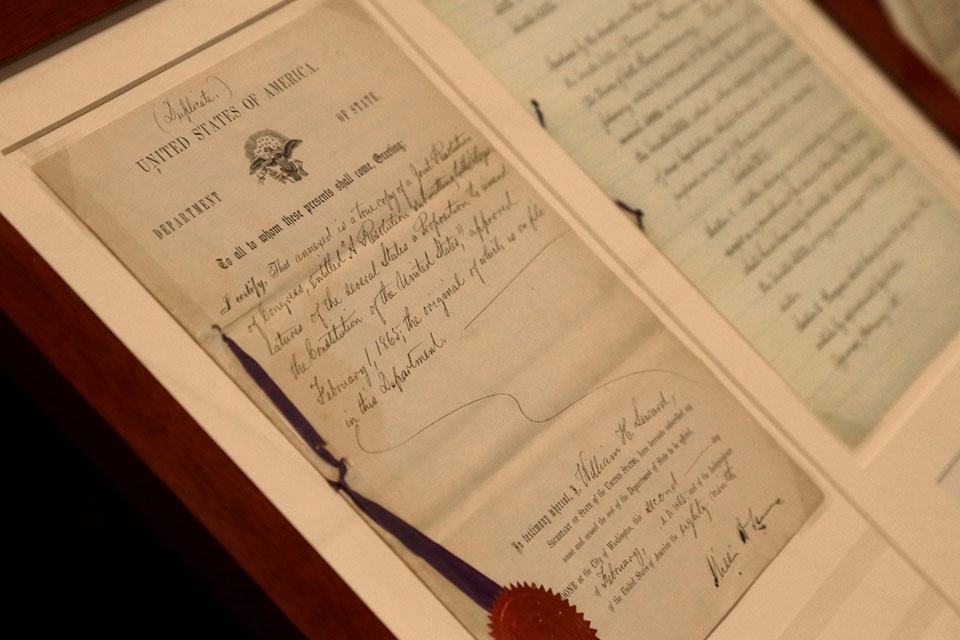 FILE - In this Tuesday, June 3, 2014 file photo, a duplicate of the 13th Amendment appears on display at the North Carolina Department of Cultural Resources in Raleigh, N.C. As the nation on Thursday, June 17, 2021 officially made Juneteenth a federal holiday, honoring when the last enslaved Black people learned they were free, lawmakers are reviving calls to end a loophole in the Constitution that has allowed another form of slavery to thrive. (AP Photo/Gerry Broome)

The 13th Amendment grew from President Abraham Lincoln's determination that the Emancipation Proclamation did not do enough to abolish slavery, according to historians. While the Emancipation Proclamation freed slaves in the South in 1863, it wasn’t enforced in many places until after the end of the Civil War two years later. Confederate soldiers surrendered in April 1865, but word didn’t reach the last enslaved black people until June 19, when Union soldiers brought the news of freedom to Galveston, Texas. That day was dubbed Juneteenth.

Meanwhile, Lincoln proposed a constitutional amendment to dismantle the institution of slavery once and for all. The Senate passed the 13th Amendment in 1864, and the House followed in early 1865, barely two months before Lincoln's assassination. The amendment was then ratified by the the states.

Constitutional amendments require approval by two-thirds of the House and Senate, as well as ratification by three-quarters of state legislatures. They are also rare.

Tylek, of Worth Rises, hopes other lawmakers will see that an exception to slavery bans is unacceptable.

“It's a huge stain on our culture, on our Constitution, on our nation to say ‘No slavery except,'” Tylek said.

"We have to be able to say no slavery — no exceptions.”