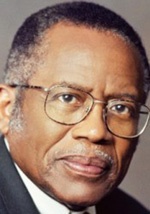 One of the nation's leading civil rights attorneys, Fred Gray, will visit Portland to give the 2008 commencement speech at Cascade College on April 26. When Gray was just 24, he represented Rosa Parks in the historic case that led to the Montgomery, Ala. bus boycott in 1955. He also served as Martin Luther King Jr's. first civil rights lawyer.
Born in 1930, Gray has spent a lifetime fighting social injustice. His landmark cases include Browder vs. Gayle, which integrated buses in Montgomery in 1956. He took the NAACP vs. State of Alabama to the Supreme Court, winning the right of the NAACP to do business in the state.
Gray has a reputation as a powerful and entertaining speaker. "I try to bring to the attention of this community and our Black youth that there are Black cowboys and we ride second to none," he has said.
Gray has been at the forefront of changing the social fabric of America regarding desegregation, integration, constitutional law, racial discrimination in voting, housing, education, jury service, farm subsidies and, medicine and ethics. Anyone who sees injustice in the world can act to change it, he maintains.
"If a Black boy in Montgomery, Ala., in the '50s can see (segregation) and be willing to take a step - and, with a whole lot of help from a whole lot of people all along the way, has been able to make a difference - you can do the same."
Fred Gray has written two books about his struggles to right historic wrongs. In "Bus Ride to Justice,"  he tells his life story from his childhood in the ghetto of Montgomery, Ala. to his work as an eminent civil rights attorney. In "The Tuskegee Syphilis Study," Gray details the shameful study that allowed more than 600 Black men suffering from syphilis to believe they were receiving treatment, but in fact left them untreated. Gray brought a class action suit against the public health service, but it was not until 1997 that President Bill Clinton publicly apologized on behalf of the government.
Cascade College will hold its 2008 Commencement Ceremony at 2 p.m. Saturday, April 26 in Cascade College gym, 9101 E. Burnside Street.
Gray is also scheduled to speak about the Tuskegee Human and Civil Rights Multicultural Center at 7 p.m. on Friday April 25, at Mallory Church of Christ, 3908 N.E. Mallory Ave. He is seeking to raise funds for the Center where the primary emphasis is on education and activities related to human rights, civil rights, historical preservation, and cultural preservation. The Center recognizes the contributions of Native Americans, European Americans, and African Americans in Southern history.