In May, Portlanders will have an opportunity to vote for City Council members, a new mayor, representatives, senators, a secretary of state and a state attorney general. And that's in addition to the presidential race where Democrats will have the chance to weigh in on the contest between Sens. Clinton and Obama.
Last week, The Skanner kicked off its elections coverage with questions and answers from candidates in two Portland City Commissioner races. This week we continue with coverage of the mayoral and City Commissioner 4 races.
Last day to register to vote is April 29. Don't forget to take your ID. Currently elections offcials are accepting drivers license and Oregon ID card numbers or the last four digits of your Social Security number. If you have none of these you can offer a copy of your paycheck, utility bill, bank statement or a government document. 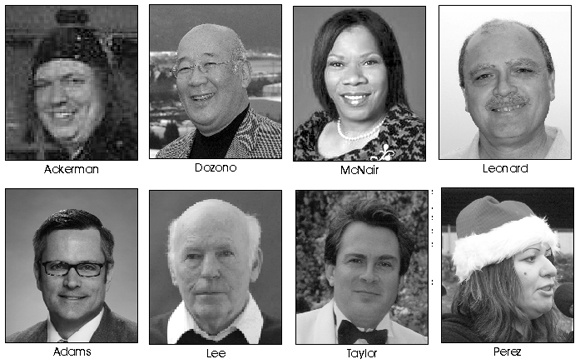 David Ackerman
"I live in and love Portland. Other than that I have no real experience — just being a normal struggling artist and worker.
"Watching the news my priorities have changed. I hope the recession doesn't hit us too hard, for one.  I want education to focus on every day issues like renter rights.  Also teach them about the dangers of credit cards and borrowing recklessly.
"We need to support local businesses and build more jobs.  They have a vested interest in our city."
Candidate Web site: www.theack9.com

Sam Adams
"From my first day as Commissioner, I hit the ground running, from visiting with 114 local businesses in my first 100 days to fighting lobbyists to bring ethics and transparency to City Hall.  I've walked hand-in-hand with citizens and organizations to enact policies that lead to a stronger Portland.
"As Mayor I'll lead a citywide effort to cut the dropout rate by focusing on creating apprenticeships and job training opportunities so our kids stay in school and gain useful skills.  I'll work to protect Portland's neighborhoods and independent small businesses, including bringing back the anti-gang officer."
Candidate Web site: www.samforpdx.com

Sho Dozono
"Collaborative leadership is what makes me the best candidate for mayor. I have a proven track record of more than 30 years working as a private citizen to bring people together to find solutions to pressing community problems. I've helped recruit jobs to this city and will continue as mayor.
"My priorities include creating jobs and building a sustainable economy that must involve everyone or it isn't sustainable, expanding options for home ownership, and focusing our education system that prepares youth for higher education and the workforce. I want to create a rainy day fund, be fiscally accountable and transparent."
Candidate Web site: www.shoformayor.com

Steven Entwisle
"As a lifelong Portlander, I have experienced the Portland Public Schools, from K-12 to P.C.C.  Due to the cuts in education, I am deeply concerned and saddened of what the people have to suffer through during these troubling times. The accounts ledger needs to be rebalanced when I am elected. (My priorities will be) "schools as stated above... public safety, community preparedness and awareness, earthquake preparedness and awareness for all communities. Easier access to new work programs, changing the environment for the chronically unemployed. Better access for the elderly and homebound, like food, groceries and nutritional needs. Also a comprehensive program that will let some students pay back student loans through service to the elderly.
Candidate Web site:

Craig Gier
"I am a honest, hardworking 26 year old. I have volunteered within the community for years. I was a teacher of GED math classes for 2 1/2 years and on the board of a local outreach program. I will work as long and as hard as it takes to try and fix this city.
"As mayor I would have a completely open door policy. I would enforce accountability for every cop, elected official, and anyone that is supposed to serve the public. I'd clean up the crime in this city, and stamp out Corruption and waste. I would never pass taxes unless they were voted in."
Candidate Web site: www.myspace.com/craiggierformayor

James B. Lee
"There are many good candidates in this election. Unfortunately five of them filed for positions other than mayor. I have observed City government for 35 years, and as a physical scientist I can reason through complicated issues and formulate practical solutions.
"My key priorities, in order, are to revise the City's enumerated powers, to adopt the 2002 global warming report on Bull Run, and to persuade voters to control PGE by purchasing post-Enron shares."
Candidate Web site: [email protected]

Beryl McNair
"I have 30 years of government and not-for profit experience including: board member, Habitat for Humanity; President of the Oregon Symphony Women's Auxiliary, which raised $100,000 for the symphony. I do a great job of delegating, communicating and facilitating people. I enjoy working with people of all backgrounds. "My priorities include working with the 95 neighborhood association Presidents, to get them training to help their communities. To help anyone who wants to work, attend school, start or continue a small business, buy a home and plant trees and flowers. We will all work collectively as a 'City that Works' should.
Candidate Web site: http://profile.myspace.com/index.cfm?fuseaction=user.viewprofile&friendid=301848721

Jeff Taylor
"Unlike the other candidates especially Mr. Adams and Mr. Dozano, (sic) I have clear action steps I will take to reduce waste in government, support seniors, support people of color, and get them into more homes, reduce crime, increase graduation rates especially African Americans, and assist African American businesses.
(My priorities would be to) "Reduce crime, increase public safety, stimulate existing business, not increase taxes which are a burden to seniors, minorities, and low income citizens.  Not take a one-month trip around the world like Mr. Dozano has said if he is elected, but spend 16 hours a day supporting our existing businesses."
Candidate Web site: www.portland123.com

Randy Leonard
"I grew up in inner NE Portland and spent 25 years as a Portland Firefighter.  I have either lived or worked in nearly every neighborhood in Portland.  I represented NE and SE Portland in the Oregon Legislature for 9 years before being elected to the Portland City Council in 2002.
"I passed Portland's ordinance requiring all diesel fuel to contain at least 5  percent biodiesel.  The city also buys biodiesel for its fleet from Oregon farmers and has it delivered by an Oregon based distributor. I will continue to work to create Portland based jobs that are good for the environment."
Candidate Web site: www.randyforportland.co