Trying to Heal the Wounds 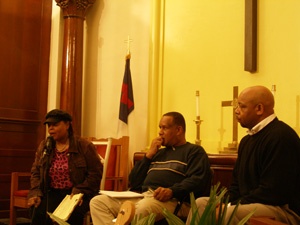 Gentrification affects us all in different ways. Some benefit. Others lose out.
Among the beneficiaries are developers who improve property in an up and coming neighborhood and lease or sell it for a profit. Or homeowners who sell in a booming market and rake in a huge return on their investment. Homebuyers too, who buy into a neighborhood before home prices go up, may see their property quickly double or triple in value.
Among the less lucky are families with limited means who simply want to keep on living in their neighborhood. Housing prices in their neighborhood often increase beyond their means to buy or rent.
These are just a few of the ways that Portland's Black community has lost and continues to lose out to the forces of gentrification. The Rev. Robert Probasco knows all too well both the economic and social injustices that have occurred in his neighborhood.
"As a landowner, I had a couple pieces of property that I chose to develop," he said, speaking to nearly full house at the First A.M.E. Zion Church. Probasco was told by the city he couldn't subdivide the property the way he wanted. He sold the property. Sixty days after the sale, bulldozers were clearing the ground. And in just 120 days, the buildings he was told couldn't be built on the property were nearly complete.
Probasco was the featured speaker during the April session of the Restorative Gentrification Listening Project, a monthly event led by the city's Office of Neighborhood Involvement. Newer, mostly White residents are invited to listen to the stories of older, mostly Black residents, who share how the forces of racism and gentrification have impacted the lives of themselves, their friends and their families.
"We're hearing an oral history that would be terrible to be lost," said Judith Mowry, project leader. For the record, Flying Focus Video Collective records all the Restorative Listening Sessions.
The April 21 session focused on how gentrification is affecting Black churches in the North/Northeast neighborhoods. Project leader John Canda gave the mostly White audience an introduction to the importance and history of the African American church, whose roots extend back to the violence and oppression of slavery.
Taking a roundabout approach to the main subject of the night, Probasco continued telling the history of his church. He told of the slave owners who were allowed to take their slaves to church and how the African Methodist Episcopal church helped run the Underground Railroad. He said the church provided a refuge for people of any color.
And then he addressed a cultural difference that many White people might not understand.
"Ever seen a Black church that has a bicycle day," he asked. "Wouldn't that be unusual?"
Yes it would, he told the audience. His community represents many people on the opposite side of the economic coin – where an automobile is a sign of status, something you worked for and are proud of.
"Not only do I have a car," he said about what many of his parishioners think. "It's the shiniest car out there."
But what does African American car culture have to do with gentrification? Cultural understanding is vital to minimizing the harm caused when a neighborhood loses longtime residents and suddenly fills with new faces.
"There are reasons there is a breach, when a person feels pushed out," he said.
When a resident plays loud music and disturbs a neighbor, for example.
"Is it easier to confront your neighbor or make the secret call (to police)," he asked. "Things are perpetrated like that on an hourly basis because there's no communication."
Where's the church in all these issues? Just trying to survive, says Probasco.
"We have more churches per capita … but nobody in them," he said.
Celeste Carey, a Listening Sessions project leader, says White residents are always welcome to come – even if some are unfamiliar with the passion and volume of the traditional Black church sermon.
"When we send out a call, it's not a call to color," she said. "How do we get you to feel comfortable and see us as a neighbor, not as a nuisance?"

Ricci Franks, a neighborhood resident who completed her master's thesis on gentrification, was surprised at what she found — White developers and homeowners were completely unaware of the gradual damage they were doing to Portland's Black community. She interviewed one man who had purchased a number of homes in a neighborhood and was rapidly putting a lot of money into the properties.
"He said he was so attracted to the diversity …" she said. But by buying up property after property from Black families, "he was pushing away the people he said he was attracted to."
Listening Session organizers say it's not that individual families moving into the Northeast neighborhood are necessarily to blame. North and Northeast Portland are simply the last tracts of affordable property in the inner city. Former state Sen. Bob Boyer made this point to a White woman who feared she was being viewed as one of the evil gentrifiers, or worse, as a racist. After advising her to talk with her neighborhood association and to treat her African American neighbors just like any other people, he reinforced her good choice of housing location. It's 10 minutes from downtown, five minutes to the freeway, and has a great park system.
"Alright then," he said with a grin.
Gentrification has produced some positive results – cleaner streets, less crime, more economic activity –  but those benefits are leaving many longtime residents out in the cold. Martin Luther King Boulevard, says Probasco, is a shining example. It's seeing a lot less quality of life crime and a lot more business.
"But those who used to hold the deeds don't hold those deeds anymore," he said.
The subject of racism still remains, as many know, a painful wound that can hurt to reopen. Probasco points to the tavern just 500 feet behind his church.
"You couldn't get a liquor license on Williams Avenue," he said, referring to a street that, decades ago, was once home to a number of Black-owned jazz venues, pool halls and taverns – now long since closed, thanks in part to large developments such as Interstate 5, Memorial Coliseum and the Emmanuel Hospital expansion. "… Or was the applicant applying for the license the reason why you couldn't get one?"
What many newcomers are looking for is solutions. How could they best lessen their impact to the neighborhood?
Mowry said it's the simple things that matter. Patronize Black businesses and talk to your neighbors. Canda had another suggestion. Stop in at your neighborhood Black church some Sunday – they welcome all colors and creeds.
All those who are interested in the effects of gentrification are encouraged to attend future meetings. The next Restorative Listening Gathering is set for 7 to 9 p.m. on Monday, May 19 in the New Columbia Community Room, 4625 N. Trenton St. A Debrief Session will be held from 6 to 8 p.m. on Tuesday, May 6 at the Talking Drum Bookstore, 446 N.E. Killingsworth, with food beforehand.