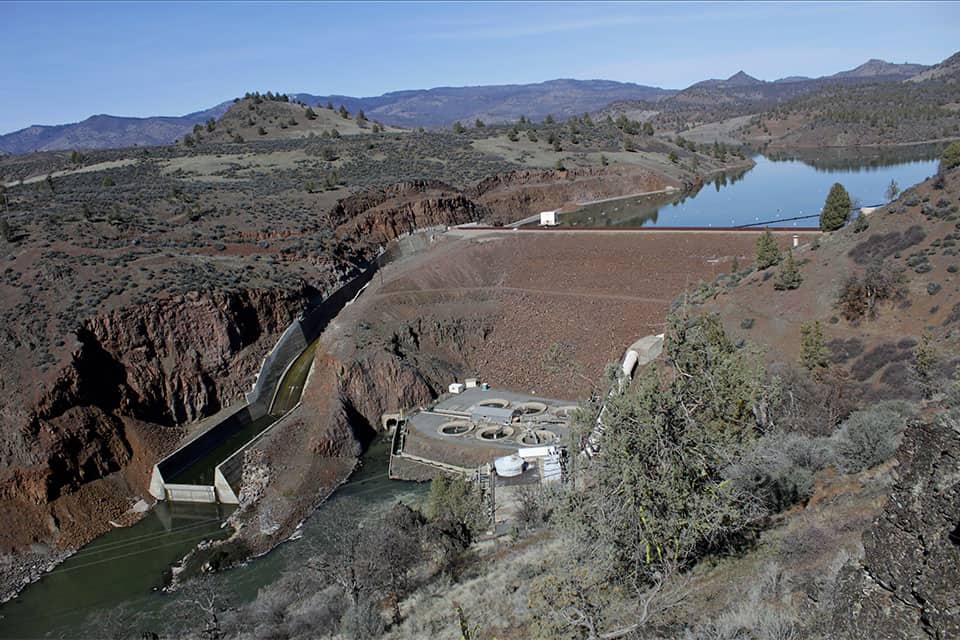 PORTLAND, Ore. (AP) — The water crisis along the California-Oregon border went from dire to catastrophic this week as federal regulators shut off irrigation water to farmers from a critical reservoir and said they would not send extra water to dying salmon downstream or to a half-dozen wildlife refuges that harbor millions of migrating birds each year.

In what is shaping up to be the worst water crisis in generations, the U.S. Bureau of Reclamation said it will not release water this season into the main canal that feeds the bulk of the massive Klamath Reclamation Project, marking a first for the 114-year-old irrigation system. The agency announced last month that hundreds of irrigators would get dramatically less water than usual, but a worsening drought picture means water will be completely shut off instead.

The entire region is in extreme or exceptional drought, according to federal monitoring reports, and Oregon's Klamath County is experiencing its driest year in 127 years.

“This year’s drought conditions are bringing unprecedented hardship to the communities of the Klamath Basin,” said Reclamation Deputy Commissioner Camille Calimlim Touton, calling the decision one of “historic consequence.” “Reclamation is dedicated to working with our water users, tribes and partners to get through this difficult year and developing long-term solutions for the basin.”

The canal, a major component of the federally operated Klamath Reclamation Project, funnels Klamath River water from the Upper Klamath Lake just north of the Oregon-California border to more than 130,000 acres (52,600 hectares), where generations of ranchers and farmers have grown hay, alfalfa and potatoes and grazed cattle.

Only one irrigation district within the 200,000-acre (80,940-hectare) project will receive any water from the Klamath River system this growing season, and it will have a severely limited supply, the Klamath Water Users Association said in a statement. Some other farmers rely on water from a different river, and they will also have a limited supply.

“The impacts to our family farms and these rural communities will be off the scale.”

At the same time, the agency said it would not release any so-called “flushing flows” from the same dam on the Upper Klamath Lake to bolster water levels downstream in the lower Klamath River. The river is key to the survival of coho salmon, which are listed as threatened under the Endangered Species Act. In better water years the pulses of water help keep the river cool and turbulent — conditions that help the fragile species. The fish are central to the diet and culture of the Yurok Tribe, California's largest federally recognized tribe.

The tribe said this week that low flows from drought and from previous mismanagement of the river by the federal agency was causing a die-off of juvenile salmon from a disease that flourishes when water levels are low. Yurok fish biologists who have been testing the baby salmon in the lower Klamath River are finding that 70% of the fish are already dead in the traps used to collect them and 97% are infected by the parasite known as C. shasta. 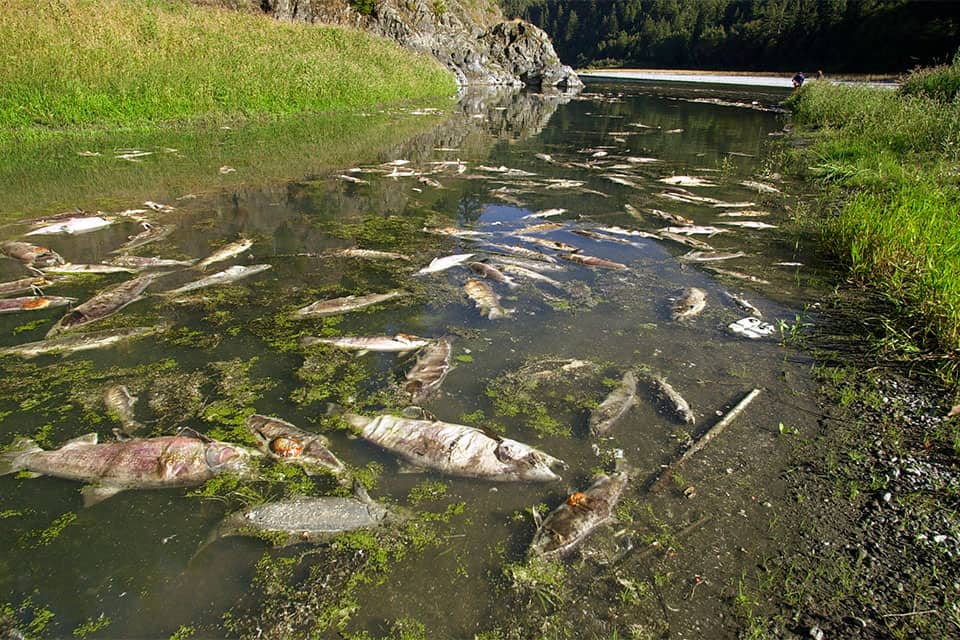 FILE - This Oct. 1, 2002, file photo shows hundreds of Klamath River salmon rotting near Klamath, Calif., after restoration of irrigation to farmers upstream produced low and warm water conditions that spread disease among the fish. A severe drought is creating a water crisis not seen in more than a century for farmers, tribes and federally protected fish along the Oregon-California border. The U.S. Bureau of Reclamation says it won't release water into the main canal that feeds the massive Klamath Project irrigation system for the first time in 114 years, leaving many farmers and ranchers with no water at all. The agency also says it won't release water from the same dam to increase downstream water levels in the lower Klamath River, where tribes say 97% of juvenile salmon are dying from a bacterial disease caused by poor water conditions. (AP Photo/Joe Cavaretta, File)

“Right now, the Klamath River is full of dead and dying fish on the Yurok Reservation,” said Frankie Myers, vice chairman of the Yurok Tribe. “This disease will kill most of the baby salmon in the Klamath, which will impact fish runs for many years to come. For salmon people, a juvenile fish kill is an absolute worst-case scenario.”

Irrigators, meanwhile, reacted with disbelief as the news of a water shut-off in the canals spread. A newsletter published by the Klamath Water Users Association, which represents many of the region's farmers, blared the headline, “Worst Day in the History of the Klamath Project.” Farmers reported already seeing dust storms that obscured vision for 100 yards (91 meters), and they worried about their wells running dry. 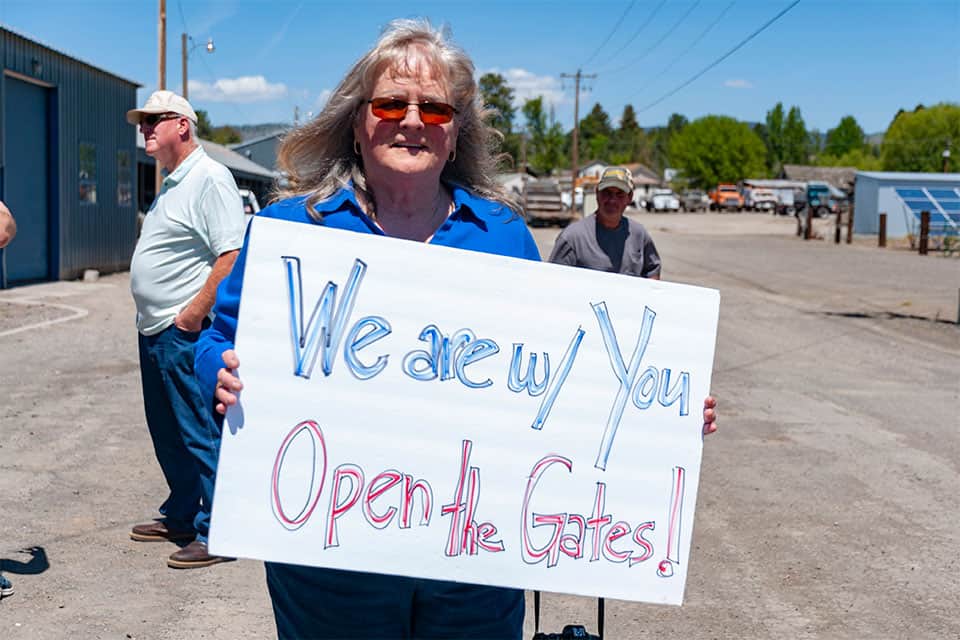 A group of roughly 30 people affiliated with People's Rights Oregon gathered at Klamath Irrigation District headquarters in Klamath Falls, Ore., on Thursday, May 13, 2021, to protest after federal regulators shut off irrigation water to farmers from a critical reservoir due to drought conditions. (Alex Schwartz/The Herald And News via AP)

About 30 protesters showed up Thursday at the head gates of the main dam to protest the shut-off and ask the irrigation district to defy federal orders and divert the water. The Herald and News reported that they were with a group called People’s Rights, a far-right organization founded by anti-government activist Ammon Bundy.

Oregon Gov. Kate Brown and California Gov. Gavin Newsom, both Democrats, have declared drought emergencies in the region, and the Bureau of Reclamation has set aside $15 million in immediate aid for irrigators. Another $10 million will be available for drought assistance from the U.S. Department of Agriculture.

Ben DuVal, president of the Klamath Water Users Association, urged his members to remain peaceful and not let the water crisis “be hijacked for other causes.”

The seasonal allocations are the region's most dramatic development since irrigation water was all but cut off to hundreds of farmers in 2001 amid another severe drought — the first time farmers' interests took a backseat to fish and tribes. 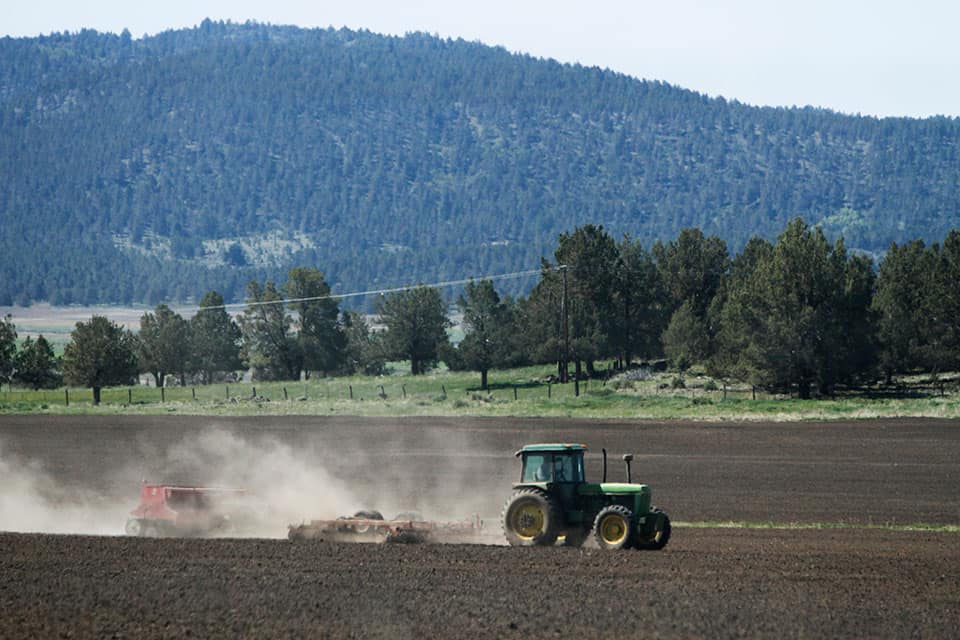 FILE - In this April 8, 2015, file photo, a tractor works a parcel of farm land in the Klamath Basin near Klamath Falls, Ore. A severe drought is creating a water crisis not seen in more than a century for farmers, tribes and federally protected fish along the Oregon-California border. The U.S. Bureau of Reclamation says it won't release water into the main canal that feeds the massive Klamath Project irrigation system for the first time in 114 years, leaving many farmers and ranchers with no water at all. (Dave Martinez/The Herald And News via AP, File)

The crisis made the rural farming region hundreds of miles from any major city a national political flashpoint and became a touchstone for Republicans who used the crisis to take aim at the Endangered Species Act, with one GOP lawmaker calling the irrigation shutoff a “poster child” for why changes were needed. A “bucket brigade” protest attracted 15,000 people who scooped water from the Klamath River and passed it, hand over hand, to a parched irrigation canal.

The situation in the Klamath Basin was set in motion more than a century ago, when the U.S. government began draining a network of shallow lakes and marshlands, redirecting the natural flow of water and constructing hundreds of miles of canals and drainage channels to create farmland. Homesteads were offered by lottery to World War II veterans.

The project turned the region into an agricultural powerhouse — some of its potato farmers supply In ’N Out burger — but permanently altered an intricate water system that spans hundreds of miles and from southern Oregon to Northern California. 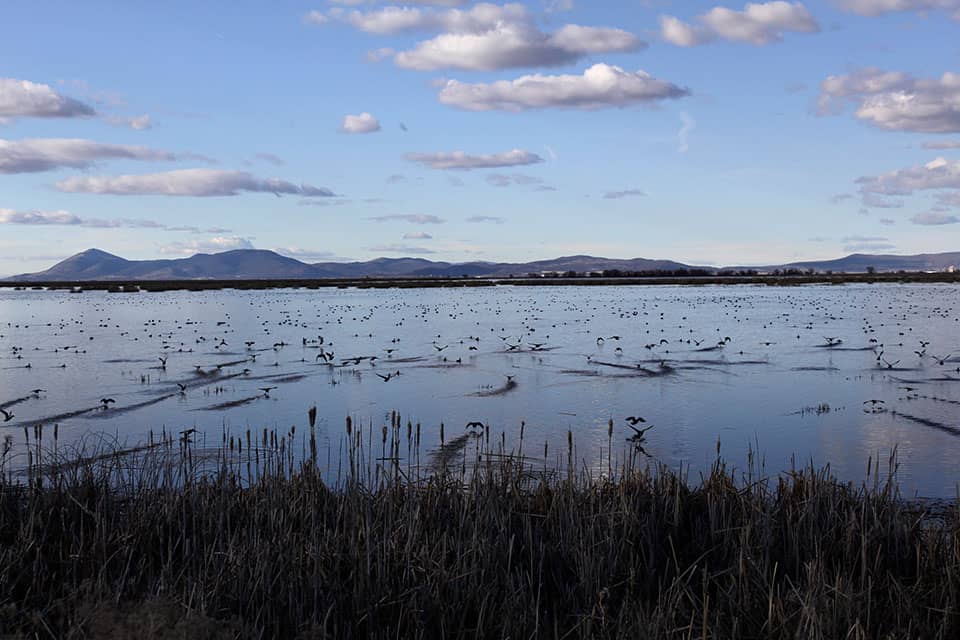 FILE - In this April 8, 2015, file photo, a tractor works a parcel of farm land in the Klamath Basin near Klamath Falls, Ore. A severe drought is creating a water crisis not seen in more than a century for farmers, tribes and federally protected fish along the Oregon-California border. The U.S. Bureau of Reclamation says it won't release water into the main canal that feeds the massive Klamath Project irrigation system for the first time in 114 years, leaving many farmers and ranchers with no water at all. (Dave Martinez/The Herald And News via AP, File)

In 1988, two species of sucker fish were listed as endangered under federal law. Less than a decade later, coho salmon that spawn downstream from the reclamation project, in the lower Klamath River, were listed as threatened.

The water necessary to sustain the coho salmon downstream comes from Upper Klamath Lake — the main holding tank for the farmers’ irrigation system. At the same time, the sucker fish in the lake need at least 1 to 2 feet (30 to 60 centimeters) of water covering the gravel beds they use as spawning grounds.

The drought also means farmers this summer will not flush irrigation water into a network of six national wildlife refuges that are collectively called the Klamath National Wildlife Refuge Complex. The refuges, nicknamed the Everglades of the West, support up to 80% of the birds that migrate on the Pacific Flyway. The refuges also support the largest concentrations of wintering Bald Eagles in the lower 48 states.

This story has been updated to correct that salmon in the Klamath River are being killed by a disease caused by a parasite, not a bacteria.