Student-Produced Play Is Out of This World 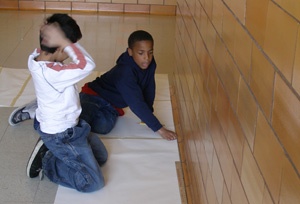 Not many ordinary jobs would empower Kevin Muir to start his own theater company. Still, it's also a select band who would leap at the chance to work with actors, singers and stagehands — who are fifth-graders. Yes, Muir is a teacher.
For four years now, this Lent Elementary teacher has been pioneering a different approach to education in his classes. When they're not studying math, science, reading and art, Muir's students are learning how to produce their very own play – from start to finish. From script writing and acting to set production, lighting, sound, music and publicity – every student has a key role in the Hot Dog Theatre Company's production of "Earthalerth," an original play that will make its premier on May 28 at the Winningstad Theater in downtown Portland.
Time is precious and he hasn't nearly enough of it, Muir says. He could also use more money and volunteers. Now, about six weeks before the curtain rises, he says he's crossing his fingers that the production will gel before opening day.
"These kids want to be successful," he said. "I'm starting to see the class come together and see individuals rise and excel."
The 18-year teaching veteran has a few helpers who are doing their part to make sure the play is a hit. For an hour every Monday and Wednesday afternoon, several adult volunteers arrive in the school to help the actors rehearse, the production team create set pieces, and the singers practice their songs. Finding these volunteers was no slam dunk. The neighborhood is largely blue collar, with 80 percent of the school's students on the federal free or reduced lunch program. Many parents are working long hours or caring for young children. So far, two parents have joined his team of adult volunteers. Muir said they could always use more help.
It takes a lot of work to turn a bunch of normal Earthlings into a group of circus performers on the planet Pluto.
When asked about the plot, Muir takes a second to get it straight in his head. It reads like a typical fifth grade plot, with circus performers, kidnappings, aliens … giant mutant space bananas.
Muir can run down the plot summary in 30 seconds: A circus company on the planet Pluto – Cirque du Pluto – needs Earthlings in order to put on a show about life on Earth. Naturally, they send their minions to trick humans into entering a fake Teletubbies contest, which finds all the winners meeting on an island in the Bermuda Triangle, where they find a wormhole that takes them to Pluto.
In Act Two, the humans find themselves performing without pay for the morally impaired Plutonians. In an effort to free themselves, the humans summon the Bananjelar, an intergalactic mutant banana that wreaks havoc all over the galaxy. Needless to say, the humans have no idea about the awful power they have unleashed: the Bananjelar follows no one's commands.
And the third act? You'll have to see the play to learn how everything is resolved.
Although students take charge of every aspect of the play's production, Muir admits that the scriptwriting demands a lot of adult supervision.
"My fingerprints are all over this," he said.
A class' story development group came up with the main plot points – based quite loosely on Cirque du Soleil – but it was Muir who helped craft it into a finished product, complete with singing and dancing.
He first thought about creating a student-produced play four years ago, after reading an article in the National Education Association's publication about another teacher working on a theater project.
"It was an epiphany," Muir says. He began the program with his second grade class at Clarendon school, now closed.
All of the practicing and production will be put to the test on May 28 when the Hot Dog Theater Company puts on its world premier at the Dolores Winningstad Theater in Antoinette Hatfield Hall, 1111 SW Broadway Ave. For just one afternoon, students will be working with volunteer staff from the Portland Center for the Performing Arts, getting tips on lighting, curtain calls, sound and other details about performing in a large venue. The Portland Center for the Performing Arts donates the space and labor needed for the production.
Robyn Williams, executive director of the PCPA, said the partnership has benefited both the students as well as the professional stage hands, and lighting and sound technicians. Best of all, she says, audiences are thoroughly entertained.
"Who better on stage than a bunch of second graders," Williams said, referring to Muir's past performances.
The students are also much more thankful than their adult counterparts. Williams received letters with a sincerity that could only come from a child.
"I do not have a single adult letter tacked to my bulletin board, but I do have three from (the students)," she said.
To help with publicity for the play, Muir is collaborating with students in Mara Wiloshin's public relations class at the University of Portland. Muir's class had the opportunity to visit the university during a field trip financed largely by Wiloshin.
Closing night will be bittersweet, Muir admits. Producing "Earthalerth" while teaching his normal line-up of subjects has been like having two jobs.
"It's just my passion that certainly carries the day," he said. His delight in seeing the students grow carried him through. "They couldn't see the big picture at the beginning of the year," he said. "Now they're beginning to get it."
The students will also perform in Salem on May 29.