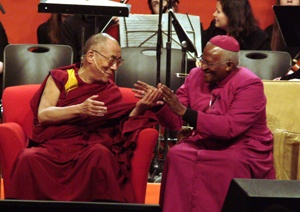 Two revered spiritual leaders were in Seattle this week as part of the five-day Seeds of Compassion event, whose mission is to nurture kindness and compassion in the world, starting with children and all who touch their lives.
His Holiness, the 14th Dalai Lama, the head of state and exiled Tibetan spiritual leader, and Archbishop Desmond Tutu, who won the Nobel Peace Prize in 1984, appeared together Tuesday to talk about inspiring compassion in youth.
"Love is a part of compassion no human being can do without," the Dalai Lama said. "Everyone deep inside has some kind of goodness."
The five-day event, which ran from April 11-15, included panel discussions with scientists, researchers, public policy leaders and experts in childhood development; workshops; talks; a resource fair; and artistic performances.
On Monday, 14,500 students from 443 classrooms in 25 Washington counties attended the "Compassion Starts Here" event at KeyArena.
Archbishop Tutu and Samuel B. McKinney, pastor emeritus, at Mt. Zion Baptist Church spoke at the final session, held at the University of Washington's Bank of America Pavilion, which explored how spiritual communities can foster compassionate action in their members
The Archbishop talked about his recent visit to Darfur and seeing the human suffering that was happening there. Tutu said he was impressed by, "the incredible resilience of people. The mothers who live in those shelters made out of sand, keeping out neither heat or cold. And you wonder how family life can be possible in certain circumstances.
"One of the things that amazed me: you're speaking to these people and seeing the awfulness, the squalor and degradation and insecurity. It was how one was so taken by the humanitarian workers," Tutu said. "People, many of them coming from quite affluent homes, people that were paid quite comfortably back home and going to that place where it's especially dangerous, people are abducted, or even worse killed, and they continue to serve. The amazing thing was, a number of them kept returning to help. What moves them? Compassion, compassion.
"For all of us who are Christian and seek to be inspired by the example of our God, how frequently in the gospel do we hear that Jesus had compassion," Tutu said. "He had compassion. His heart went out to others. We try. We hope we can emulate this ... and be the compassionate one."
The Archbishop talked about the terrible toll AIDS is taking.
"At home (South Africa) we are being devastated by the AIDS/HIV pandemic," he said. "Parents die and the children are orphaned so teenagers are now the heads of home."
Tutu noted that some of the hardest workers, helping people in the areas most devastated by AIDS/HIV, are White people.
"Now I mention that because many of the young victims are people of color," Tutu said. "You might have thought that — given where we come from — Whites used to hate (people of color) … and yet in this crazy, nice country of ours, some of the most giving, dedicated workers will be White people caring for the sick. … it's crazy, but it's a nice crazy."
McKinney said he learned about compassion from his parents, who taught him to put a human face on people and their situations and see people as individuals.
"We need to be able to relieve people of their excuses why they cannot be compassionate," McKinney said. "Excuses will not help, we must move forward in a positive way and then change will come, and we have to be in position to be able to help people when they are ready to change. We need to help, to keep them from falling over in the first place; we need to be working on the front end rather than the back end."
The Seeds of Compassion event was organized by a multicultural group of Washington leaders from religion, government, business, education, nonprofits, community groups and other fields. It aimed to create an opportunity for participants to learn the benefits of compassion and how to bring compassion into their lives. Organizers distributed more than 150,00 tickets for the five-day event.
Organizers believe compassionate human beings are the foundation of strong and healthy societies. Kindness and compassion are essential to building a world where our children can grow into happy human beings.
When children form strong foundations, socially, emotionally, cognitively and culturally, they can develop into happy and compassionate adults and positive members of society. But these qualities must take root in early childhood. Without compassion we risk the future of our world.
Recent research studies indicate that the ability to demonstrate compassion is closely tied to the brain and biology. Children demonstrate empathy – sensitivity to other people's feelings — as young as three-and-a-half years of age. By the time a child turns five, as much as 80 percent of the brain's architecture is already developed.
"Now is the time to launch a global compassion movement, a sustainable effort that will raise people's awareness of the importance of compassion," said Lama Tenzin Dhonden  co-founder of Seeds of Compassion. The Seattle-area Buddhist leader and personal Emissary of Peace for the Dalai Lama said, "Together we can create a more compassionate society for children of the world."
For more information or too see broadcasts of the events, visit www.seedsofcompassion.org.