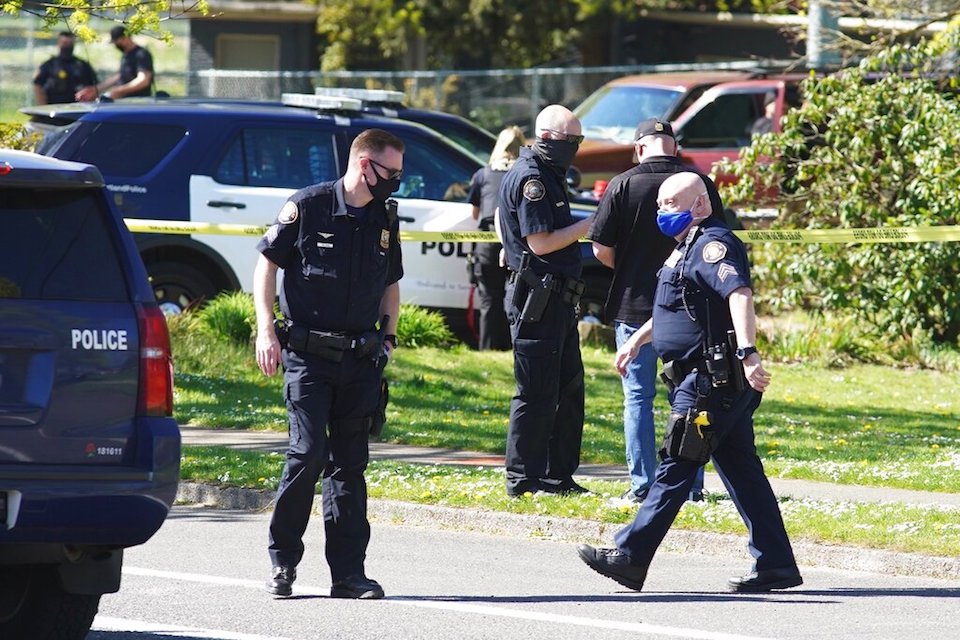 PORTLAND, Ore. (AP) — Police in Portland, Oregon, declared a riot on Friday night after authorities said protesters smashed windows and burglarized businesses during demonstrations that gathered in a park earlier in the day after police fatally shot a man while responding to reports of a person with a gun.

The vandalism took place in response to the police shooting but also was part of vigils and demonstrations already planned for Friday night in the name of people killed in recent police shootings nationwide, including 13-year-old Adam Toledo of Chicago and Daunte Wright, a Black man in Minneapolis.

Deputy Police Chief Chris Davis told reporters earlier in the day that a white man in his 30s was shot and killed by police, who opened fire with a gun and weapons that fire non-lethal projectiles.

The man was pronounced dead at the scene in Lents Park, in a leafy, residential neighborhood of the city.

Two officers fired a 40mm device that shoots non-lethal projectiles, and one officer — an eight-year veteran — fired a gun, police said in a statement. The officer is on paid administrative leave, and his or her name will be released Saturday, authorities said.

Riot cops getting pelted with shit as they retreat #PortlandProtests pic.twitter.com/xIBecW8nCc

Was man in a mental health crisis?

A witness who spoke to reporters at the scene said the man, who had removed his shirt and was blocking an intersection, appeared to be in a mental health crisis, The Oregonian/OregonLive reported.

The police investigation into the shooting was being hampered by a “decent-sized crowd of fairly aggressive people” who showed up at the park within two hours of the shooting.

As investigators scoured the scene and documented evidence, nearly 100 yards (91 meters) away, a crowd of more than 150 people — many dressed in all black and some carrying helmets, goggles and gas masks — gathered behind crime scene tape, chanting and yelling at the officers standing in front of them.

As police began to finish on-scene investigation around 3 p.m. the crowd marched through the park, ripped down police tape and stood face to face with officers dressed in riot gear.

Police left the park around 3:30 p.m., and the crowd remained and eventually stood in a nearby intersection, blocking traffic and chanting.

Police said later Friday they had used pepper spray on protesters in order to disengage. Some people hit officers with sticks and chased officers as they were leaving, police said in a news release. Officers deployed smoke canisters and then used a rubber ball distraction device, police said.

Tonight people gathered in Portland on the waterfront for a candle light vigil for Adam Toledo and marched over Hawthorne Bridge. #PortlandProtests pic.twitter.com/ZPo0OLwgJ8

"Violent agitators distract from the message"

Portland has been the site of frequent protests, many involving violent clashes between officers and demonstrators, ever since the police killing of George Floyd in Minneapolis in May.

Over the summer, there were demonstrations for more than 100 straight days. Earlier this week, a crowd set a fire outside the city's police union headquarters following recent fatal police shootings in Chicago and Minneapolis.

Portland Mayor Ted Wheeler has decried what he described as a segment of violent agitators who detract from the message of police accountability and should be subject to more severe punishment.

Videos on social media Friday showed protesters skirmishing with police, who used mace to keep them away from the crime scene. Detectives huddled over a covered body still at the scene as dozens of protesters chanted, banged drums and waved signs condemning the police from about 100 yards (91 meters) away.

“We’ve had to summon just about every police officer in Multnomah County to keep this group far enough away … to preserve what we refer to in our business as the integrity of the scene, so that nobody who shouldn't be in there goes in there,” Davis said, adding that deputies with county sheriff's office were also helping.

The Portland ICE facility is currently on fire #PortlandProtests pic.twitter.com/4IrGp4UioR

Wheeler visited the shooting scene and issued a statement urging Portland residents to “proceed with empathy and peace” while the investigation unfolds.

These shootings always are traumatic for everyone involved and for our community, regardless of the circumstances,” Wheeler said. “I want to offer my sympathy to the individual involved and to their family. My thoughts also are with the officers who were involved.”

Todd Littlefield, who lives near where the shooting happened, told The Oregonian/OregonLive that he went to the park after he heard gunfire.

“I was just getting in my truck, and I heard a loud shot,” he said.

Littlefield drove to the park and saw several officers standing behind trees and their cars, ordering a man to show his hands, he said.

Juan Chavez, an attendant at a nearby gas station, said he saw a man standing in the middle of the intersection, blocking traffic, with his shirt off. He appeared to be unstable and disoriented, Chavez told the newspaper.

Police then showed up, and the man entered the park before Chavez said he heard two gunshots.

The area where the shooting happened is within the boundaries of operation for a new city pilot project called Portland Street Response in which a team without police officers responds to reports of homelessness or people in mental health crisis.

The pilot project team was not called out Friday and would not respond to a call involving reports of a person with a gun, Davis said.